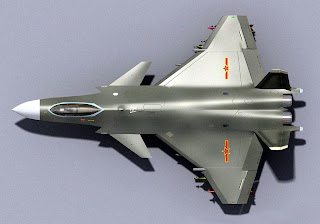 India began the process of selecting a Medium Multi-Role Combat Aircraft (MMRCA) some 8 years ago. The tender is for a Fourth Generation aircraft.

The second of the 8 required steps has now been concluded. It may take several years and episodes to go through the entire process, providing that some new Minister or Air Chief does not decide to start again from scratch (probably for very valid reasons, like for the Eurocopters two years ago!).
In the meantime the Chinese are working very hard on the Fifth Generation fighter plane. It means that by 2020, India will again be a generation behind.
What to do? But as the Prime Minister proudly said in New York , "they don't have democracy". We can't have everything in life!

Apart from the article below, another article in the China Brief of the Jamestown Foundation is eye-opening.


Chinese Air Force Deputy Commander: 5th Generation Fighter to service in next 8-10 years
Posted on 08 November 2009 by admin November.09 (China Military News Reporting by Johanthan Weng) Ho Weirong, the deputy commander of PLA Air Force, says China’s 5th Generation fighter will enter service in next 8-10 years, when he attended a TV interview program on 8th November, just before the 60th anniversary of PLA Air Force.
The interview TV program, “Face to Face”, is run by CCTV, which is the largest state-run Television station in China. During the interview, the interviewer asking Deputy Commander Ho when China can have its 5th generation fighter, Ho says the R&D of 5th generation fighter is being intensely made. And according to some resources, he also discloses that the first trial flight is coming later and then the 5th generation fighter will enter into test flight phase.
He tells the interviewer that under the estimation of present R&D progress the Chinese 5th generation fighter will be delivered to PLA Air Force  and enter service in next 8-10 years (before 2010).
November 11 is the 60th anniversary of the Chinese Air Force. 8 evening broadcast on CCTV’s news channel, “Face to Face” program, the Chinese take pride in what the Air Force deputy commander said the fourth-generation Chinese-made fighter jets are in a busy development process, the upcoming first flight. Immediately after the first flight into the flight test phase, according to the present situation, made four generations of fighter aircraft in the 8 to 10 years immediately after the armed forces.
The 5th generation fighter aircraft is usually referred to US-made F-22 “Raptor” and F-35, which have “4S” abilities- stealth, supersonic cruise, super maneuverability and short take-off. The 5th generation fighters have overwhelming technological advantages to 3th or 4th generation fighters. Currently, F-22 is the only in-service 5th generation fighter, F-35, Russian’s T-50 are in the process of development. Chinese 5th generation fighter is the fourth one which is admitted to enter into the actual development process.
Ho deputy commander also says that China-made third-generation fighter J-10’s performance is equivalent to F-16 fighter. He points that J-10’s max weapon load is up to 6 tons, having 11 pylons and its shortest take-off distance is only 350 meters.
It is said that No.611 Institute of CAC (Chengdu Aircraft Corporation) became the winner in the 5th generation fighter competition with No.601 Institute of SAC (Shenyang Aircraft Corporation). Mr. Yang Wei, the chief designer of J-10 fighter, has been promoted to a higher position in AVIC and can deploy more company resources to support the R&D of CAC.
Exactly, infromations gathered from Internet just prove one thing that China don’t want to copy F-22 under the technological gap with U.S. China’s fifth generation fighter may have one or two advantages to fetch up the suprem 4S charactors of F-22. Depending on information revolution and interior lines combat situation, China thinks it can challenge the superiority of American Air Force.
Posted by Claude Arpi at 8:56 PM