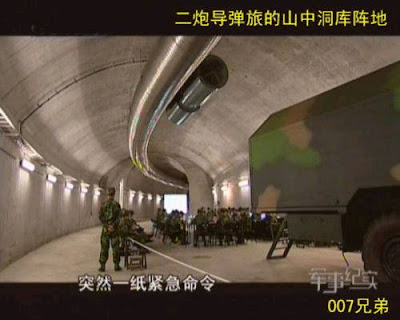 An important factor for hiding the missiles from the view of the foreign satellites (or even the local population) is China’s predilection to built underground tunnels, silos and even cities. In November, 2001, Craig’s Smith wrote in The New Times an article entitled Mao's Buried Past: A Strange, Subterranean  City. He described in detail a network 10-to-15-feet wide tunnels in Beijing. In the early 1970’s (when Communist China was getting closer to Washington), Mao had constructed a 500-bed underground hospital, a 1,000-seat movie theater, classrooms, granaries, a barbershop and even public baths and an arsenal, under the Chinese capital. Smith said that “Beijing's total honeycomb, which took 400,000 people to complete, could reputedly hold a million people and stretched to the Western Hills, behind whose distant outline the city's sun sets each night.”
Most of this underground works date from the late 1960’s or beginning of the 1970’s. It was meant to counter a supposedly Soviet threat. It was in fact sheer paranoia from an aging Great Helmsman who called the masses to ''deeply dig caves, extensively store rice.''
Smith recounts that “major cities entered a molelike competition to build the country's most extensive tunnel network. Almost every able-bodied adult and child took part.”
It was reported that by the end of 1970’s, some 75 of the largest cities had dug tunnels to hold 60% of their populations. As Smith put it: “Strategic mountains were riddled like Gruyère.”
There was even a four-lane underground roadway between Zhongnanhai, the Communist Party's leadership compound and the Great Hall of the People. To dig underground silos is therefore no big deal for the Chinese engineers.
A recent article in the China Brief of the Jamestown Foundation brings light on the existence of an  Underground Great Wall.


China's "Underground Great Wall" and Nuclear Deterrence
China Brief Volume: 9 Issue: 25
December 16, 2009
by Russell Hsiao
In early December, the People’s Liberation Army's (PLA) publication, China Defense Daily (Zhongguo Guofang Bao), published a report that provided a rare glimpse into an underground tunnel that is being built by the Second Artillery Corps (SAC)—the PLA's strategic missile forces—in the mountainous regions of Hebei Province in northern China. The network of tunnels reportedly stretches for more than 3,107 miles (Ta Kung Pao, December 11; Xinhua News Agency, December 14). The revelation of the semi-underground tunnel highlights the strides being made by China's nuclear modernization efforts, and underscores a changing deterrent relationship between the United States and China.
The labyrinthine tunnel system, dubbed by the Chinese-media as the "Underground Great Wall” (Dixia Changcheng), was built for concealing, mobilizing and deploying China's growing arsenal of nuclear weapons. According to military experts cited by various reports, the main purpose of the underground tunnel is to provide the SAC with a credible second-strike capability. The building of an underground tunnel for this purpose is consistent with China's evolving nuclear doctrine from its traditional posture of "minimum deterrence" to a doctrine of "limited deterrence," since the subterranean bunkers strengthen the survivability of China's nuclear forces and bolster its nuclear deterrence posture.
Analysts have long speculated that the SAC' most important underground missile positions were located in the mountainous area in northern China. The geography of this region is cut by steep cliffs and canyons, and therefore suited for use in covering the network of tunnels that is 3,017 miles and can feed a web of underground launch silos. According to a military analyst cited by Hong Kong-based Ta Kung Pao, "the outermost layer is 1,000  meters [3,280 feet] deep and covered with soil that does not include any artificial reinforcements" (Ta Kung Pao, December 11; Xinhua News Agency, December 14). Moreover, the Chinese reports described the tunnel system in terms of "hard and deeply buried targets" (HDBTs), which typically refers to facilities a few hundred feet deep in "underground installations." In the of case of strategic nuclear missiles, it would mean that all preparations can be completed underground, and the transportation of missiles, equipments and personnel through a network of underground corridors by rail cars or heavy-duty trailers to fixed launch sites can not be detected from observations on the ground (Ta Kung Pao, December 11; News.sina.com, December 13; Xinhua News Agency, December 14).
The SAC arsenal of land-based nuclear warheads is believed to include the DF-3A, DF-4, DF-5 (CSS-4), DF-21, DF-31 and the DF-31A. These land-based ballistic missiles have a range of 200 to 5,000 kilometers. According to one U.S.-estimate, "China has approximately 176 deployed warheads, plus an unknown number of stored warheads, for a total stockpile of approximately 240 warheads" (Bulletin of Atomic Scientists, Vol. 64, No. 3).
This report is not the first time that the existence of a tunnel of such magnitude was revealed. As early as 1995, according to a report in the Liberation Army Daily cited by Ta Kung Pao, a SAC project called the "Great Wall" was completed after 10 years of construction through the labor of "tens of thousands" of army engineers. Furthermore, the Chinese-television program, "Documentary for Military," aired by Chinese-state run television network CCTV on March 24, 2008, also revealed the status of an underground nuclear counter-strike project called the "great wall project" (Ta Kung Pao, December 11; News.sina.com, December 13).
An article published in the Taiwan-based Asia-Pacific Defense Magazine, entitled "A Destructive Projection Power: PLA Second Artillery Corps' Long-range Guided Missiles," by former Taiwanese Vice Admiral Lan Ning-li, included an analysis that also discussed underground installations of the Second Artillery Corps. According to Vice Admiral Lan's assessment: "The early version of China's mid-to long-range missiles had all been deployed above ground and were vulnerable to detection by spy satellites and attacks by interceptor missiles. That prompted the Chinese military to move all of their missiles hundreds of meters underground" (Ta Kung Pao, December 11; Chosun Ilbo, December 14). Moreover, a Hong Kong-based military analyst cited by Ta Kung Pao suggested that the timing of the open declaration about China's nuclear modernization before negotiations on the Strategic Arms Reduction Treaty may be meant to draw attention to China's nuclear stature (Ta Kung Pao, December 11; News.sina.com, December 13).
Yet, while deterrence assumes that a more secure second-strike capability could enhance stability by causing adversaries to act more cautiously, some analysts have pointed out that strategic stability may not be the necessary outcome of China's deployment of a secure second-strike capability (See "The Future of Chinese Deterrence Strategy," China Brief, March 4). Since China continues to conceal details about the size and composition of its nuclear stockpile, this may lead to more concerns from China's regional neighbors over Beijing's nuclear modernization.
Posted by Claude Arpi at 11:57 AM