Death of a Collaborator 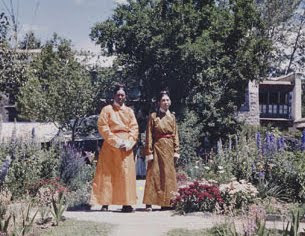 Ngapo has passed away in Beijing. He was the main Tibetan collaborator. Without his full support, the Chinese would have found difficult to 'peacefully liberate' the Roof of the World in the fifties. He was the signatory of the 17-Point-Agreement (in May 1951). Ngapo even agreed to have seals forged to affix at the bottom of the text. During the following decades he faithfully served his masters.
The Chinese are obviously proud of him.

Vitae of Ngapoi Ngawang Jigme
www.chinaview.cn  2009-12-24
BEIJING, Dec. 24 -- Ngapoi once served as vice chairman of the National People's Congress (NPC) Standing Committee from 1964 to 1993 and vice chairman of the National Committee of the Chinese People's Political Consultative Conference (CPPCC) for many years.
He was also president of the China Association for Preservation and Development of Tibetan Culture, established in 2004.
He was one of the founders of the Tibet Autonomous Region and the first chairman of the Regional Government.
He followed renowned scholars like Sherab Gyatso, who was strongly against an independent Tibet.
In 1949, Ngapoi urged the Dalai Lama and the local Tibetan Government to accept the Central Government's invitation and send a delegation to Beijing to negotiate the peaceful liberation of Tibet.
When he was designated governor of Qamdo, Ngapoi dismissed more than 8,000 militia soldiers who were deployed to fight the People's Liberation Army, paving the way for the peaceful liberation of Qamdo.
In 1951, the Dalai Lama sent Ngapoi and four other delegates to Beijing for negotiations. In Chongqing, Ngapoi met future Chinese leader Deng Xiaoping for the first time. In an article, he recalled that Deng dispelled his doubts about Tibet's future and that he regarded Deng as his first guide in the revolutionary cause.
In 1951, the Central Government and local Tibetan authorities signed the 17-Article Agreement, heralding the region's peaceful liberation.
During the rebellions of the 1950s, which were instigated by some Tibetan nobles and high-ranking religious figures, Ngapoi stood firmly against the wave, and personally protected many who stood up to the rebels.
Ngapoi ushered in major milestones in Tibet, such as the democratic reforms and the founding of the Tibet Autonomous Regional Government.
(Source: China Daily/Xinhua)
Posted by Claude Arpi at 1:07 PM