Beijing to train the Gurkhas 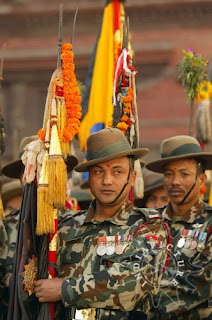 For a hundred years, the Gurkha regiments have been the best troops of the British Empire. They today need training from the Chinese 'Liberation Army' which has never been known for its military prowess.

Is it not strange that the latter should train the former?
But for Beijing, it is way to step further into Nepal and reach the Gates of India.


China to train Nepal Army; Pledges Rs 220 mn aid
Shrish B Pradhan
Kathmandu, Dec 16 (PTI) In a move that may raise concerns in India, China today said it will train the Nepalese Army and pledged Rs 220 million as military assistance for procuring "non lethal" hardware and logistics.
The pledge was made during a meeting between a Chinese military delegation led by Maj Gen Jia Jialing and Defence Minister Vidya Bhandari.
The money will be utilised to supply the "non-lethal" military hardware including logistics and training to the Nepal Army, according to Adviser to Defence Minister Subhash Devkota.
According to Defence Ministry sources China will supply 20 million Yuan worth of "non-lethal" military hardware to strengthen the Nepal Army. The remaining 800,000 Yuan will be utilised for imparting training and holding interaction between the two armies in the Nepal-China border area.
Posted by Claude Arpi at 12:02 PM