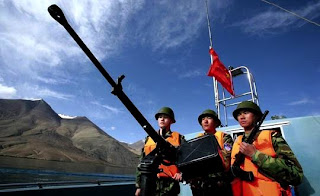 Incredible India never worries!
It is a great quality though in the past, it has not helped India's preparedness to ignore the Chinese build-ups in Tibet.

Not worried about China's air strips near border: India
December 01, 2009
With reports suggesting that China was building over two dozen new airstrips along the Line of Actual Control, the government on Tuesday said there was no need to be 'unnecessarily' worried as India [ Images ] was adequately strengthening itself.
"I don't think we need to be unnecessarily alarmed. As a regional power, they (China) will strengthen their infrastructure. They will procure their arms and we are doing what we have to do for strengthening our line," said Minister of State for Defence M M Pallam Raju.
The minister was asked to respond to reports claiming that China was building 27 airstrips along the LAC. There was no need to be 'unnecessarily worried' about what other countries are doing, Raju said, adding "Our programmes are going smoothly and we are doing adequately to strengthen ourselves."
On the stopping of work on a link road in Ladakh region after objections by the Chinese army, the minister said, "I think some of these things happen when there is a difference of perception. I guess that must be the reason."
Work on the road being was being built under the centrally-sponsored National Rural Employment Guarantee Scheme. The road was expected to connect two villages in Demchok in South-Eastern Ladakh, but work was stopped during the last week of October.
Posted by Claude Arpi at 2:09 PM