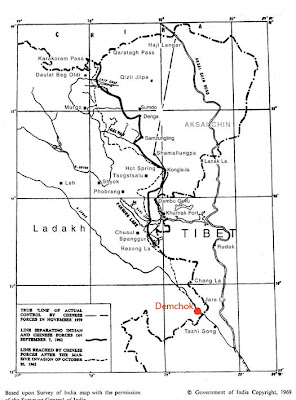 China continues to try to impose its will on India. Now, Beijing objects to the building of a road towards Demchok, which is well within Indian territory as this map shows.
During the first rounds of talks on the border in 1960 Dr S. Gopal, historian and son of Dr Radhakrishnan presented historical facts showing that Demchok was part of India since the 10th century.
I am publishing here some of the extracts of the minutes of a meeting held in Beijing at the end of July 1960.
There is no ambiguity about Demchok. The fact had also been accepted by China during the negotiations for the Panchsheel Agreement in April 1954.

Minutes of the Third Round of Talks (July 1960 - Beijing)
At first Ladakh was an independent state comprising a large part of western Tibet, but later, towards the end of the tenth century A. D., it was divested of most of its Tibetan possessions by a family partition. Even then in the tenth century, the traditional boundary of Ladakh with Tibet was well known and recognised by tradition. There is manifold proof of this. A Chronicle of Ladakh compiled in the 17th century and called –I will spell this LA-DVAGS-RGYAL-RABS, meaning the Royal Chronicle of the Kings of Ladakh, records that this boundary was traditional and well known. The first part of the chronicle was written in the years 1610-1640; and the second half towards the end of the 17th century. I would like to table extracts from this chronicle. References to page I am giving are from the English translation by A. H. Francke and published as a part of volume 2 of “ANTIQUITIES OF INDIAN TIBET”, published in Calcutta in 1926. The Ladakh chronicle describes the partition by King Skyid-lda-ngeema-gon of his kingdom between his three sons, and then the chronicle describes the extent of territory secured by that son who was given Ladakh. I am quoting from page 94 of this book. The following is the quotation:
“He gave to each of these three sons a separate kingdom viz., to the eldest, Dpal-gyi-ngon, Maryul of Mnah-ris, the inhabitants using black bows, Ru-thogs of the east and the gold Mine of the Hgog; nearer this way Lde-mchog-dkar-po at the frontier Ra-ba-dmar-po; Wam-le to the top of the pass of the Yi-mig roc... ”
(Mr. Gopal again read out the full extract). Now, Maryul, meaning lowlands, was the name given to Ladakh. Even at that time i. e. in the 10th century, the boundary of Ladakh was therefore known tolie –apart from Rudok which at that time belonged to Ladakh-at Lde-mchog-dkar-po, i. e. Demchok; and at the top of the pass of the Yimig rock, i. e. at the limis pass; and Wamle, i. e. Hanle, was known to be within Ladakh. The present Indian alignment runs past Demchok and through the Imis pass to include Hanle in India. So even in the tenth century the boundary alignment of Ladakh was, in this sector, where it is now.
In the later part, i. e., the second half of this same Ladakh Chronicle, there is a reference to the war that took place at the time (1681 to 1683) when this part of the chronicle was being written, when a mixed force of Mongols and Tibetans invaded Ladakh. This force was driven out by the Ladakhis with the assistance of the Mogul Governor of Kashmir, Ladakh in 1664 having become a part of the Mogul empire. The Ladakhi Chronicle states- I am quoting from page 116-that after the war Ladakh Tibet again decided that “the boundary shall be fixed at the Lha-ri stream at Bdemchog”. Bde-mchog is clearly Demchok and this quotation shows that in the 17th century, as in the tenth century 700 years earlier, the traditional boundary of Ladakh continued to lie east of Demchok.

Mr. [J.S.] Mehta: I just wanted to know whether it is proposed that documents or photostat copies of documents are to be exchanged or are they to be shown in original and not be given for study.


Mr. Chang [Chinese official]: They must just be shown