What about replacing the Human Species? 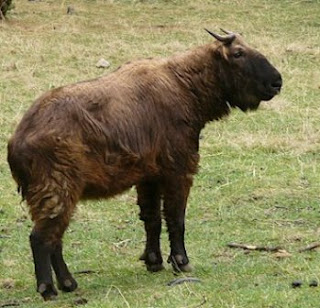 This Takin looks sweet. But it is today endangered, like many other species in the Himalayas.
The planet probably needs another Drukpa Kunley to make some news species, and perhaps one to replace the human species.

Bhutan’s national animal faces extinction threat
New Indian Express
Prasnata Mazumdar
December 26, 2009
GUWAHATI: When Lama Drukpa Kunley, (the divine madman) visited Bhutan in the 15th century, devotees urged him to perform a miracle.
The saint demanded that he be first served a cow and a goat for lunch. After devouring them with relish and leaving only bones, the Lama took the goat’s head and stuck it onto the bones of the cow.
He then commanded the strange beast to rise and graze on the mountain-side. Amazing all, the animal rose and ran up to graze.
The animal in question – Takin or Budorcas taxicolor, the national animal of Bhutan – is now under tremendous ‘hunting pressure’ from tribals in Arunachal Pradesh.
Found in the Eastern Himalayas, this fleshy goat-antelope was chosen as the national animal of Bhutan based on its uniqueness and strong association with the country’s religious history and mythology. There are four subspecies: Mishmi Takin, Shanxi or Golden Takin, the Tibetan or Sichuan Takin and the Bhutan Takin.
Posted by Claude Arpi at 7:30 AM