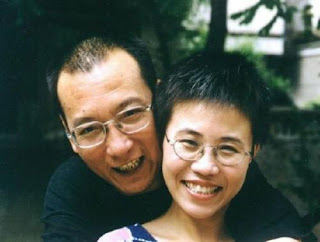 Two-hour trial is fast! One often wishes that justice should be faster in India, but not that speed. Here justice appeared to have been denied, tough justice was not delayed.

China dissident jailed 11 years
A Chinese court has sentenced a leading dissident to 11 years in prison for "inciting subversion of state power".
Liu Xiaobo, a 53-year-old academic, who was previously jailed over the 1989 Tiananmen Square protests, had been charged for co-authoring a document appealing for political liberalisation.
The verdict was handed down by a Beijing court on Friday after a two-hour trial on Wednesday in which prosecutors accused Liu of "serious crimes".
Liu's lawyer, Shang Baojun, said he had 10 days to appeal, but Liu's wife, Liu Xia, had said on Wednesday that her husband had no plans to appeal.
Condemnation
Friday's sentencing came despite calls by the US and EU for Liu's release.
"We are deeply concerned by the sentence of 11 years in prison announced today," Gregory May, the US embassy's first secretary in China, told reporters outside the courthouse.
Who is Liu Xiabao?
Liu Xiabao is a literary critic, a former professor of literature and human rights activist
He has called for the reform of China's one-party Communist system, and was jailed for 21 months for taking part in the Tiananmen Square protests of 1989
In 1996, he served another three years in a "re-education" camp for seeking the release of prisoners jailed in the Tiananmen demonstrations
Last year, he was arrested for co-authoring Charter 08 - a petition calling for freedom of assembly, expression, and religion in China
In June, Liu was charged with the "incitement of subversion of state power" and could have been jailed up to 15 years
"Persecution of individuals for the peaceful expression of political views is inconsistent with internationally recognised norms of human rights."
May was one of a dozen diplomats stopped by the authorities from attending the trial and sentencing.
Jiang Yu, a Chinese foreign ministry spokeswoman, told reporters this week that statements from embassies calling for Liu's release were "a gross interference of China's internal affairs".
The highly-sensitive case has also been criticised by human rights groups, which said the trial was deliberately timed to coincide with the Christmas holiday period, in the hope that international media and foreign governments will overlook the case.
New York-based Human Rights Watch (HRW) issued a statement condemning Liu's conviction on Friday, calling it a "travesty of justice".
Phelim Kine, an HRW researcher in Hong Kong, told Al Jazeera that "today, we have seen the true face of the regime, and the true face is that the Chinese government uses the judicial system to silence dissent".
"The fact is that it's a myth that China is now more tolerant of free speech. Liu Xiaobo is a high-profile figure, and they have used him to send a message that they will not tolerate these ideas."
Challenging one-party system
The case against Liu centres on his co-authoring of a petition titled Charter 08, which calls for the protection of human rights in China and reform of the country's one-party communist system.
Al Jazeera's Melissa Chan, reporting from Beijing, said Liu's conviction - the longest sentence for "inciting subversion" handed down since the crime was established in the 1997 reform of the criminal law - sent a clear message that the Chinese authorities do not tolerate his kind of opinions.
The charter co-authored by Liu sought amendments to the constitution and called for a multi-party system in China, which our correspondent said may have been seen as a direct challenge to the Communist party.
According to China Human Rights Defenders, a network of activists, the petition had been widely circulated online, and was signed by more than 10,000 people, including other dissidents and intellectuals.
Among the signatories was Bao Tong, an aide to Zhao Ziyang, the late general secretary of the communist party purged for sympathising with the Tiananmen protests.
Bao himself spent seven years in prison for sympathising with democracy advocates.
Liu is the only person to have been arrested for organising the Charter 08 appeal, but others who signed it have reported being harassed.
The petition, which said "we should end the practice of viewing words as crimes", specifically called for the abolition of subversion in China's criminal code - the very crime for which Liu was sentenced on Friday.
Posted by Claude Arpi at 1:35 PM