A few days ago, I posted Will China dam the Indus, quoting an article of The Financial Times affirming that Beijing has sent to Islamabad a proposal to invest 15 billions dollars to dam the Indus.
Unfortunately, the human, sociological and ethnic factors are generally not included in the cost estimate.
Look at what is happening in Burma: a Chinese company (or a conglomerate) comes, local people are displaced, then the construction starts under Chinese soldiers' protection, creating more tension and clashes.
Already in 2008, IDSA had mentioned these two dams in its Weekly Report:


A Chinese-Myanmarese joint project to construct a series of hydroelectric dams in Kachin State has met with resistance from the Kachin Independence Organization (KIO), said sources close to the armed ethnic group. The KIO, which signed a ceasefire with the junta in 1994, was reportedly unhappy that several projects to build dams in Kachin State. Tensions soared two weeks ago when Chinese authorities refused to pay tax to the KIO, which responded by deploying soldiers around the two dams in progress - Tarpein 1 and Tarpein 2 - which are being constructed on the Tarpein River in Momauk Township by Myanmar’s Ministry of Electric Power No 1 and a conglomerate of Chinese companies. Soon after two battalions of armed KIO soldiers took up positions around the dams the Chinese construction workers on the project fled, causing construction to be suspended. Sources close to the KIO said that the workers returned and the project resumed about one week ago after Chinese authorities paid 1.5 million yuan (US $220,916) to the KIO. The negotiation was reportedly mediated by newly appointed Commander of Northern Command Brig-Gen Soe Win. The Tarpein 1 hydroelectric dam is designed to generate a capacity of 240 megawatts and is located about 3.5 miles from Momauk Township, while Tarpein 2, which should generate 168 megawatts, is located about 6 miles downstream of Tarpein".

Perhaps the bosses of Pakistan (btw, who are the bosses in Pakistan?) should visit Burma and inspect the Chinese dams' sites to understand the danger of getting the Indus dammed.
The local populations in Gilgit-Baltistan may not believe in the 'all-weather-friends' concept, the way the generals do in Islamabad.
What about Tibet? Has the Chinese Academy of Sciences taken into consideration the lakhs of local villagers and herders who will have to be 'reallocated' for the grand diversion scheme.
These details do not probably bother Mr Guo Kai and his  friends. But it should!
To know more on the dams in Burma, visit the Burma Rivers Network website. 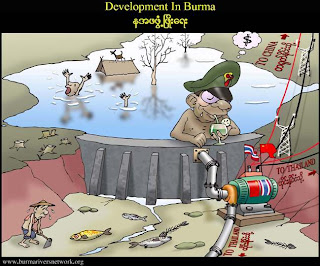 Myanmar blames Kachin rebels for fighting
The Associated Press
Yangon
June 18, 2011
In its first public comments on a week of fighting in northeast Myanmar, the government said Saturday that ethnic Kachin rebels fired first and the army had to act to protect a major Chinese-built hydroelectric power project.
The skirmishes were some of the fiercest in nearly two decades between government forces and the Kachin Independence Army. They erupted June 9, displacing at least 10,000 people over the course of about one week. The rebels have blamed the government for launching an offensive after militia fighters rejected a call to leave the strategic region.
The government says it did call on rebels to leave, but accused them of firing first after threatening Chinese technicians and detaining two army officers, according to a report Saturday in the state-run New Light of Myanmar newspaper.
The 8,000-strong Kachin militia is one of several minority ethnic rebel armies in Myanmar who say they are fighting for greater autonomy.
The government paper said Myanmar's military ordered rebels to withdraw from a camp near the Tarpein hydropower project, a joint venture between Myanmar's Electric Power Ministry and China.
The government said that during the fighting, militia fighters blew up power pylons that fed the project, as well as 20 bridges. The violence forced 215 Chinese employees to flee home across the border, the report said.
Military columns "had to inevitably attack the KIA just to rescue their officers ... who were detained without any reason and to protect the high-cost Tarpein hydropower project," the report said.
The U.S. Campaign for Burma, a Washington-based lobbying group, said last week the militias had returned six detained army soldiers during a lull in fighting. It was not immediately clear if the two officers reported detained by the government were among them.
Myanmar's central government has tenuous control of many parts of the country where minority groups are strongest. Many of those groups maintain their own militias. The government has reached cease-fire agreements with 17 rebel militias since 1989 and most have been allowed to keep their weapons and maintain some autonomy over their areas.
The Kachin militia reached a peace deal with the country's former ruling junta in 1994, but the truce broke down last year after the militia rejected a call by the government for them become border guards under army leadership. The junta made the appeal ahead of last November's elections, Myanmar's first in 20 years, which introduced the nominally civilian government now in power.
Posted by Claude Arpi at 7:06 AM