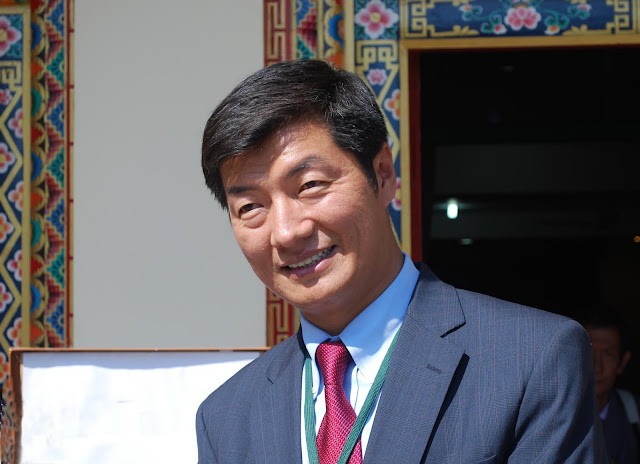 On March 10, the Dalai Lama dropped a bombshell: he had decided to stop all political activities. In one way, it solved the problem of 'succession' as all the executive powers were now to be concentrated in the elected prime minister.
A few days after the announcement, the ballot box spoke out: Dr Lobsang Sangay, born in India 43 years ago and educated first in India and then at Harvard Law School, was elected as the new Kalon Tripa (prime minster).
Many in the Tibetan community saw Sangay as a Tibetan Obama.
'Change' was the buzz word in Dharamsala, home of the Dalai Lama in Himachal Pradesh. Even the Tibetan charter (constitution) had to be amended to reflect the change: Article 1 of the charter now terms the Dalai Lama as the "human manifestation of Avaloketeshvara, the guardian and protector of the Tibetan nation," but with no political power.
Claude Arpi travelled to Dharamsala to record the newly elected prime minister's views on the election campaign, his objectives, his government's relation with China and the changes he would like to bring about in Tibetan society. Dr Lobsang Sangay candidly answered all the questions put forth to him.

Can you say a few words about yourself; your 'Indian' life and your 'American' life?

Both my parents fled Tibet in 1959 along with His Holiness the Dalai Lama. My father was a monk during the guerilla resistance; he fought some battles, then he came to India.
All his family members were left behind in Lithang in Kham province. From my mother's side, all the family members managed to come to India, with the exception of one, who went back to Tibet to fight the Chinese army; he never returned.
I grew up in a very small Tibetan refugee settlement between Darjeeling and Sonada in West Bengal. From there, I went to the Central Tibetan Schools of Sonada and Darjeeling. Then, I attended school at St Stephen's in Darjeeling and later went to University of Delhi where I obtained degrees in arts and law.
In 1995, I left for the United States as a Fulbright scholar (it was originally for two years, but later I got other scholarships). I pursued MA at Harvard Law School and completed my PhD in 2004.
While I was in Delhi, I was elected as a Tibetan student leader, and later joined the Tibetan Youth Congress as a member of the National Central Committee (CENTREX).
When did you decide to start campaigning for the post of Kalon Tripa?
At first, I did not have plans to run for the post of Kalon Tripa. Till the fall of 2009, I did not attend any special course. I remained in Harvard Law School, with the East Asian legal studies programme, mostly working on China-related programmes.
In early 2009, the Tibetan community started talking about the election of the Kalon Tripa, even a website was created. By fall 2009, I started to take courses in leadership, communication, election campaign and so on.
By spring 2010, it became serious; some national organisations began nominating me. I thought, "OK, why not give it a try". On Radio Free Asia, they had this weekly programme on democracy and the rule of law. I was often asked questions like, 'how to improve our legislative system?'
My answer was, "Candidates should go to the people, candidates should debate amongst themselves; they should share their policies and platforms, they need to be well-informed".
I said this all along. When this platform for the Kalon Tripa elections was offered to me, I thought I should do what I always preached: "Go to the people and debate about policies".
This was really appreciated by the people. Sometimes thousands turned out in monasteries, in schools, refugee settlements, everywhere. It was a first. I never asked for votes, I just said, these are my ideas, "If you don't like them, sorry to have wasted your time".

Continue to read
Posted by Claude Arpi at 2:10 PM