The last time we officially heard about the diversion of the Brahmaputra was in November 2006 when President Hu Jintao was about to visit India.
At that time, China decided to cool down the legitimate worries of the Indian State.
Water Resources Minister Wang Shucheng, a hydraulic engineer, affirmed  that the proposal was "unnecessary, unfeasible and unscientific. There is no need for such dramatic and unscientific projects."
He however admitted that there a plan in the drawers, but "the project involves major financial and technical difficulties".
Wang explained: "For example, we must keep an eye on possible floods when the Yellow River has 58 billion cubic metres of water. If another 50 billion cubic metres, not to mention 200 billion, is poured in, I am sure all the dams and protection embankments will be destroyed immediately."
Further, he said: "the cost of diverting water from the Yarlung Zangbo would be much more expensive than any of the current water projects."
At that time, Chinese Foreign Ministry spokesman Liu Jianchao also confirmed: "The Chinese government has no plans to build a dam on the Yarlung Zangbo River (the China part of the Brahmaputra) to divert water to the Yellow River."
The Chinese media criticized Li Ling's book Tibet's water will Save China. 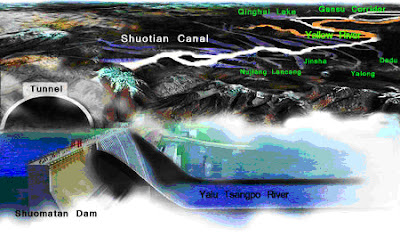 As President Hu was arriving, other Chinese 'experts' were engaged to denounce the plans of Li Ling and Gao Kai.
Qin Hui, a professor in School of Humanities and Social Sciences of Tsinghua University declared: "Without international co-operation it is impossible to launch any major water project for an international river like this. ...Plus, we have to take the international response into consideration. It is undoubted that the lower reaches of Yarlung Zangbo River are within India's Assam Province, where it is a lifeline for local agriculture and backbone of the economy, just as it is further downstream in Bangladesh."
Qin added: "It is so obvious that the proposed damming project will have a cascading effect leading to a natural disaster in the lower foreign reaches of the Yarlung Zangbo, Lancang (Salween) and Nujiang (Mekong) rivers."
Liu Changming, a hydrologist at the Chinese Academy of Sciences who has advised the government on these proposals declared: "It's just an idea that has floated around society, in books and media reports. People are confusing the two plans, the smaller Western Route and the Great Western Route, and they're mistaking private enthusiasm for official support."
Liu also confirmed that a team of water experts from the Chinese Academy of Engineers, an advisory group of prominent scientists had concluded that the proposal to tap the Brahmaputra River would be far too expensive, technologically unfeasible and  ...too controversial.
He however knew that: "There may be some retired officials that support the plan, but they're not the experts advising the government."
Now, Prof Wang Guangqian of the Chinese Academy of Sciences seems to say that China has no choice, but to do it. It is what I always argued.
However, there is a big difference between 2006 and now: with the opening of the tunnel to Metok (Motuo), the Chinese engineers have today the possibility to start the mega power plant which could provide the necessary energy to the diversion scheme, planned a couple of hundred kilometers upstream the Yarlung-Tsangpo, near the town of Tsetang.

China to Consider Diverting the Brahmaputra River
2point6billion.com In Science & Technology
June 8
Faced with severe challenges brought by reduced water resources and a severe drought [1] that has affected a large portion of the country, China has started to consider diverting water from the Brahmaputra River, the watercourse that originates upstream from southwestern Tibet (where it is known as the Yarlung Zangbo River) and finally enters India, a recent report by Xinhua News Agency says.
Wang Guangqian, a scholar at the Chinese Academy of Sciences, said on June 3 that Chinese experts have raised a new proposal to divert water from the upper reaches of the Brahmaputra River to the country’s northwestern province of Xinjiang. The water diversion route in the proposal, named the “Grand Western Canal,” is slightly different from the “western canal” mentioned in China’s well-known South-North Water Diversion Project approved by the State Council in December 2002.
While the previous canal aims to alleviate water shortages in Qinghai, Gansu, and Ningxia and plans to divert water from three rivers in the Yangtze River’s upper reaches – namely the Tongtian River (Qinghai), the Yalong River (Sichuan) and the Dadu River (Sichuan) – the newly proposed route is expected to start from the Brahmaputra River, from which China can reroute the water to Xinjiang along the Qinghai-Tibet Railway and the Hexi Corridor – part of the Northern Silk Road located in Gansu Province.
Wang admitted the serious water crisis across China has forced experts to think about the new water diversion scheme earlier than they had wanted to.
“We thought this would be a plan 50 years later,” he said.
Due to the increasing demand for water along the middle and lower reaches of the Yangtze River and the Yellow River – China’s two largest and most heavily-exploited domestic watercourses – the upper reaches of the two rivers have seen a significant decline in their water reserves. What is worse, as a result of surface water deficiency, almost all of China’s first and second-tier cities have the problem of groundwater overdraft and are threatened by potential risks brought by the lowering of the water table (the level at which the submarine pressure is far from atmostpheric pressure).
In fact, experts originally brought up various plans to reroute water from the largest river in Tibet a long time ago. One of the most famous proposals was raised in 1990 by Guo Kai, a water expert, suggesting a project that diverts 200.6 billion cubic meters of water every year from the Brahmaputra River to the Yellow River. However, according to a 2009 Xinhua report, Wang Shucheng, the previous minister of the Ministry of Water Resources, somewhat denied the feasibility of the plan.
At the time, Wang Shucheng believed the water diversion from the Yangtze River is enough for North China’s water supply and redirecting so much water from the Brahmaputra River every year is not even practical, because such a huge flush will destroy all the dams over the Yellow River.
Presently, Chinese experts and governmental officials are still studying the feasibility and possible impacts of distinct proposals.
Although China has claimed first-use-rights over the Brahmaputra and all of the other rivers in Tibet, the water resource exploitation of those international rivers is not only a domestic issue. Downstream, the Brahmaputra flows through India as well as Bangladesh and serves as a major fresh water source for a myriad of people. While China finally confirmed the construction of a dam project [2] over the Brahmaputra last year, India’s Minister of State for Environment and Forests Jairam Ramesh already commented that the project is “unacceptable” [3] and stressed the “great fear in India” would be China’s water diversion of the Brahmaputra, which may impact Northeastern India ecologically and bring the threat of drought to the region.