American values and freedom of information 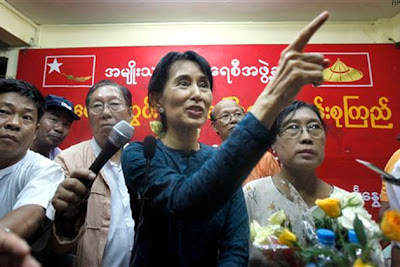 The Chinese media (and probably the Chinese government) believe that a free press' only objective is "to have American values infiltrate other countries".
I am usually not a defender of American values, but Voice of America or Radio Free Asia are doing an extraordinary work of information in several totalitarian environments.
Watch this video-message of Aung San Suu Kyi on the occasion of the 15th anniversary of Radio Free Asia.
Serious events are happening in Tibet, has Xinhua reported them?
Here is the information received through Radio Free Asia for 3 recent incidents which occurred in Tibet.


Tibetan monks at a restive monastery in southwestern China’s Sichuan province refused to take part in a religious rite on Wednesday, claiming that Chinese authorities were staging the event for purposes of “propaganda,” Tibetan sources living in India said.
The ceremony, which is normally held twice a month at the Kirti monastery chapel dedicated to “protector deities,” had been postponed since March 16, when a Kirti monk set himself on fire in a protest against Chinese rule in Sichuan’s Tibetan-majority Ngaba (in Chinese Aba) prefecture.
The monk’s protest sparked a crackdown by Chinese security forces, leading to the forced removal of about 300 monks for “political re-education” on April 22 and the beatings and detention of local Tibetans seeking to protect the monks, and drawing worldwide condemnation.
A few days before June 15, Chinese authorities announced that the long-delayed ceremony honoring the deities would again be held and invited members of the public to attend, said Kanyag Tsering and Lobsang Yeshe, Tibetan monks living at Kirti’s branch monastery in exile in India. Read on ...


Protests against Chinese rule have escalated in a Tibetan-majority region of southwestern China this week with demonstrators braving beatings and detentions, Tibetan sources in the region and in exile said.
Chinese authorities have also bolstered security amid the growing protests by local Tibetans in the town of Kardze (in Chinese, Ganzi) in the Kardze prefecture of China’s Sichuan province.
On Saga Dawa, a Buddhist holiday on June 15, nine Tibetans staged protests in downtown Kardze, a Tibetan resident of Kardze told RFA, speaking on condition of anonymity.
“One was a monk from Dhargyal monastery,” he said. “Four nuns, two [lay]women, and two youths also protested.”
“Their names and other details about them are not known. However, the movements of local people are restricted, and armed police are everywhere.” Read on...


Tibetan truck owners seeking work on road and railway projects in Tibet have been pushed aside in favor of drivers working for Chinese companies, sparking protests and clashes, Tibetan sources say.
Chinese authorities responded by sending riot troops and police to contain unrest in Shigatse in Central Tibet and Lithang in the east, sources said.
“On June 1, about 100 Tibetan drivers protested in front of Lithang county headquarters,” said Lobsang Gawa, a Tibetan living in India and citing contacts in the region.
“Because improvements to a section of the highway connecting Chengdu in China’s Sichuan province with the Tibetan capital Lhasa were planned for their area, they felt the work should be given to them,” Gawa said.
Instead, Gawa said, Chinese authorities assigned the work to 24 companies based in mainland China, which then brought in Chinese workers, sparking the protests. Read on...

The day when Xinhua is able to report in a fair and objective manner, it may not needed for 'American' radios to broadcast anymore.
In the meantime, we can only be grateful to them.

Xinhua Comments on U.S. “Shadow Internet” Endeavor
Source: Xinhua
June 15, 2011
A Xinhua article commented on the New York Times report that the U.S. plans to invest US$70 million to develop a "shadow" Internet system and a “communication network of mobile phones” to help the opposition in Iran, Syria, and Libya avoid Internet censorship. The article said, “The U.S. spares no effort to develop such techniques. Its purpose is nothing but to have American values infiltrate other countries. … In the past decades, the U.S. spread its values mainly through broadcasters such as ‘Voice of America,’ ‘Radio Free Europe,’ and ‘Radio Free Asia.’ With the Internet boom, the U.S. has obviously moved the main battlefield of ideology to cyberspace.”

The article called the U.S. a powerful country with hacking technology. “Although always advocating 'Internet freedom,' the U.S. controls all of the 13 root servers of the world Internet. Various countries in the world have repeatedly requested that the U.S. move control over the root servers to the U.N. or other international organizations, so as to effectively ensure the freedom and security of the Internet. The U.S. has always ignored them. People cannot help asking: is it Internet freedom or the freedom to infiltrate, sabotage, and attack other countries that interests the U.S.?