After the Dalai Lama 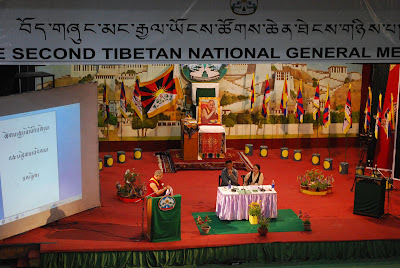 For the past three months, Tibetans in exile have gone through a political and historical tsunami, the most serious since March 1959 when a young Dalai Lama decided to cross the highest Himalayan peaks to take refuge in India. At that time, he abandoned his homeland along with some 85,000 of his countrymen; this was the beginning of long and traumatic years as refugees.
Today when the Tibetans are considered to be one of the most successful exiled communities, the Dalai Lama has decided to change the three-century old governance system of the Land of Snows and quit politics to consecrate his energy on other pursuits.
On March 10 in a public statement, the Tibetan leader explained the background for his decision: "As early as the 1960s, I have repeatedly stressed that Tibetans need a leader, elected freely by the Tibetan people, to whom I can devolve power. Now, we have clearly reached the time to put this into effect.”
In June 1991, the Tibetan Parliament in exile (also known as the Assembly of Tibetan People's Deputies) had adopted a ‘Charter’, a sort of Constitution providing a separation of power between the judiciary, legislature and executive powers of the Central Tibetan Administration (or Government in exile). The Charter assigned specific functions to the Dalai Lama as the Head of the State.
Penpa Tsering, the Assembly’s Speaker explained that on March 14 the Dalai Lama addressed the Deputies: “The message of His Holiness was very firm, very determined. It was very difficult for most of the members to digest the decision of His Holiness”. For a long time, the Deputies had had inklings of the Dalai Lama’s intention to retire, but “nobody could image that it would be so encompassing and so sudden”, noted Tsering.
After the Dalai Lama had officially rejected an appeal of the 14th Assembly to reconsider his decision, it became clear that there was no choice but to amend the Charter and adapt the provisions to the new situation.
It was a difficult task, though the Dalai Lama said: "It is to benefit Tibetans in the long run. It is not because I feel disheartened. Tibetans have placed such faith and trust in me." 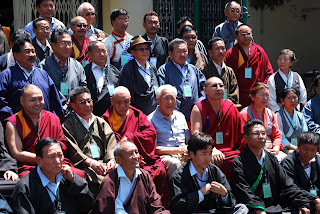 A five member 'Constitutional Amendment Drafting Committee' was formed, with representatives from the Kashag (Cabinet) and the Assembly to suggest a legal solution to the tricky situation.
In an interview in 2006, the Dalai Lama had told me: "I have three commitments in life: promotion of human values, promotion of religious harmony and promotion of awareness of the Tibetan cause."
He had further elaborated: "Out of three commitments, number one and two are mostly on volunteer basis. Till my death I committed myself to these causes. Regarding the third one (Tibet), in a way it not a voluntary commitment, it is due to past history and to the Dalai Lama institution.”
Now he has decided to withdrawal from this historic commitment.
While making a proposal, the Drafting Committee kept in mind both aspects of the issue: the past historical role of the Dalai Lamas and their special place for the Tibetan Nation as well as his request to be relieved of his political responsibilities.
The Committee finally presented the outcome of its deliberations to a National General Meeting held at Dharamsala from May 21 to 24. This enlarged consultative sesssion was attended by 418 ‘senior’ Tibetans such as ‘former ‘prime ministers’, members of the Cabinet, former ministers, present and former members of Parliament, representatives from the Tibetan settlements and eminent members of the civil society.
Everyone was overwhelmed by the momentous occasion, sensing that the Tibetan nation was at an important turning point of its history. Could Tibet smoothly walk from theocracy to democracy?
A large majority of the delegates favoured a constitutional system with the Dalai Lama as an honorific Head of State, (many spoke of the British system, though the example of the Queen was not a happy one). He refused.
Though the 'draft' provided the historical background of the previous dual role of the Dalai Lamas; it was decided that in the changed situation, the Dalai Lama should remain ‘Protector and the Symbol of the Tibetan Nation’: “[as] human manifestation of Avaloketeshvara, is the guardian and protector of the Tibetan nation. He is the guide illuminating the path, the supreme leader, the symbol of the Tibetan identity and unity, and the voice of the whole Tibetan people.” In one way, he could fulfill his historical role, without dealing with day-to-day issues.
While many nations, particularly in the Arab world try hard to overthrow by force their unelected leaders through ‘flower revolutions’, here is the example of a leader wanting to quit all his responsibilities and the masses begging him to remain at the helm in one way or another.
The ‘retirement’ has some serious implications.
First, there is undoubtedly a larger political dimension to the Dalai Lama’s retirement; it put the political leadership in Beijing in an awkward position. Beijing has no clue about a democratic process, having only known the dictatorship of a one-party rule since 1949.
Second, it solves the issue of a successor for the Dalai Lama; now constitutionally the political successor will be the elected Kalon Tripa.
The Deputies wanted the Dalai Lama to continue to provide guidance in various forms “in matters of importance to the Tibetan people, including the community and its institutions in exile”. The Dalai Lama did not agree, he knows perfectly well that his ‘advice’ is always considered as an ‘order’ by the Tibetans.
Dr Lobsang Sangay, the elected Prime Minister explained to us: “We were left to amend the Charter with a Preamble and 3 provisions [Article 1] which have been accepted with some dilution or explanations: The Dalai Lama, our most revered leader, will continue to represent the Tibetan people, he has accepted to ‘share his opinions’ with the Cabinet and the Assembly and now the Cabinet will appoint representatives and envoys, who will be allowed to use his name.”
The Dalai Lama will however continue to meet with world leaders and other important individuals and bodies; in international fora, he could continue o speak on behalf of the Tibetan people.
Another issue is the negotiations with Beijing. When we asked Dr. Sangay if he believes that the Chinese who have always said that they will only speak to the Dalai Lama’s Representatives, will now accept to meet Envoys nominated by him, he said: “They should talk both with His Holiness the Dalai Lama and the Tibetan Administration. We are for dialogue, for genuine autonomy. The [Chinese] are sometimes too much obsessed with technicalities.”
The Chinese have repeatedly stated that they would only discuss with the Dalai Lama “his own future and that of some of his supporters.”
The Dalai Lama has always countered this argument saying that he is not bothered by his status, but is only interested in the welfare of the 6 million Tibetans in Tibet.
It is perhaps because the situation has not moved forward for the past 30 years and that the future seems rather bleak that the Dalai Lama has decided to withdraw at this point in time.
After one week of suspense and several back and forths between the ‘Palace’ and the Assembly, the Dalai Lama has finally accepted the changes proposed by the Assembly and the amendments have now been ratified.
What an example for the world, a leader giving up his historically bestowed powers on his own, without a bloody revolution or even a flower revolution!
Posted by Claude Arpi at 12:58 PM