A treaty on river sharing with China? 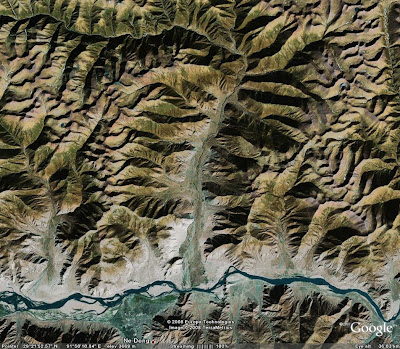 It is good if Indian officials  start batting for a 'credible' water sharing treaty with China on the lines of the Indus Water Treaty, as this article of Telhelka reported.
On May 21, 1997, the General Assembly of the United Nations adopted a Convention on the Law of the Non-Navigational Uses of International Watercourses.


The Convention "aimed at guiding States in negotiating agreements on specific watercourses and invited States and regional economic integration organizations to become parties to it. The Assembly took that action through its adoption, by 103 votes in favour to 3 against (Turkey, China, Burundi) with 27 abstentions (India is one of the nations which abstained).

The 37-article Watercourses Convention and its 14-article annex governs the non-navigational uses of international watercourses, as well as measures to protect, preserve and manage them. Viewed as a framework Convention, it addresses such issues as flood control, water quality, erosion, sedimentation, saltwater intrusion and living resources.

A number of States who abstained or voted against the text drew attention to a lack of consensus on several of its key provisions, such as those governing dispute settlement. A number of speakers said there was a lack of balance in its provisions between the rights and obligations of the upstream and downstream riparian States. Concern was also expressed that the Convention had deviated from the aim of being a framework agreement.

During the debate at the UN, Indian Permanent Representative Prakash Shah explained why India abstained. He regretted that:


the Convention had not been adopted by consensus. While a framework convention should provide general principles, the present Convention had deviated from that approach. Specifically, he had reservations regarding its articles 3, 5, 32, and 33. Article 3 had not adequately reflected a State's autonomy to conclude agreements without being fettered by the Convention. Article 5 had not been drafted clearly and would be difficult to implement. The Convention had superimposed the principle of "sustainable utilization" over the principle of utilization without appropriately defining the term "sustainable". India had abstained in the voting on draft articles 5, 6 and 7 in the working group.

Article 32 presupposed regional integration and hence did not merit inclusion, he went on to say. Article 33, on dispute settlement,contained an element of compulsion. Any procedure for peaceful settlement of disputes should leave the procedure to the parties. Any mandatory third-party dispute procedure was inappropriate and should not be included in a framework convention. He had voted against the provision in the working group and would have voted against had the article been put to a separate vote today. His country had therefore abstained in the voting.

It was rather technical objections which could be certainly sorted out.
One of the solutions to solve the debate on the diversion of the Brahmaputra would be for India to sign this Convention. It would put China in a very awkward position.
Another solution would be to have a bilateral Treaty/Agreement with China like the Indus Water Treaty with Pakistan. It is quite remarkable this Treaty survived several conflicts between the two neighbours.
Unless China agrees in a legal form that the rivers of Tibet do not 'belong' to China only, suspicion will remain.

Govt bats for Indus water-like treaty with China
Iftikhar Gilani
Telhelka
New Delhi
BATING for a “credible” water sharing treaty with China on the lines of the Indus Water Treaty (IWT) India has Pakistan, government officials here admitted there was no “verifiable system” of checking or probing China’s dam building spree particularly on the on the Yarlung Tsangpo River (aka Brahmaputra). Officially, however, India on Monday said it was verifying reports of such activity.
“We are seeking details from our Embassy in China. We are trying to get more details both from the government and depending on the reports we get, we will be able to make an assessment and take appropriate steps,” External Affairs Minister SM Krishna said.
“We have no reason to believe otherwise,” the government sources said, when asked if the satellite imagery has been indicating any activity along the river.
India’s worry mostly stem from the fact, that any Chinese activity of blocking waters would spell disaster on several hydropower coming up in Arunachal Pradesh.
Of India’s hydropower potential of 150,000 megawatts (MW), 50,000 MW is in the northeast. And AP, which is mainly fed by Brahmaputra’s tributaries –Siang, Subansiri and Lohit.
Posted by Claude Arpi at 7:44 AM