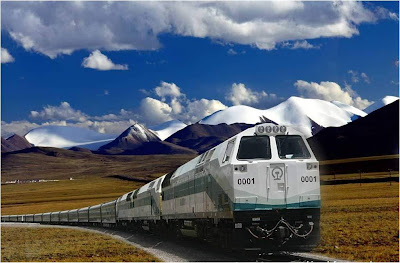 The argument that these new railways lines will be "a strategic investment that will link markets across the country", is true, but there is more.
As I mentioned in an earlier post, not only it will open new markets, but in many places, (particularly in Tibet and Xinjiang), it will facilitate the transfer of  millions of Han migrants in these 'minorities' areas.
It will also help the 'freight', in other words to take minerals from these areas back to the mainland and finally and perhaps more importantly, it will allow quick transpiration of troops in case of 'ethnic' or 'external' conflicts.
Taking all these factors into account, the investment may not be wasted.


China's railway boom hurtles into the red
Reuters
By Michael Martina and Xin Zhou
BEIJING (Reuters) - The numbers for China's relentless push for a high-speed rail network are impressive -- in terms of debt, not passengers.
The argument in support of the vast project -- with many lines connecting to more sparsely populated inland regions -- is that they are a strategic investment that will link markets across the country.
Detractors counter that while high-speed rail may suit the densely populated eastern corridor, investment is wasted on inland projects which are better served, and more cheaply, by short flights and slow trains.
"It will be a liability, not an asset, for China," complained Zhao Jian, a professor with Beijing Jiaotong University, a vocal opponent of the ambitious plans.
The Ministry of Railways, already deep in debt, is undeterred and expects to splurge another 2.8 trillion yuan between now and 2015 on the project.
State backing for the 45,000 km (27,962 miles) of high-speed track the ministry has pledged to lay by the end of 2015 means it can almost certainly find the money.
But outsiders, too, are weighing into the debate.
U.S. economist Nouriel Roubini spoke to reporters earlier this month in Singapore of his trip on the Shanghai-Hangzhou high-speed train, which connects the cities in 40 minutes.
" is half-empty and the brand new station is three-quarters empty. Parallel to that train line, there is also a new highway that looked three-quarters empty. Next to the train station is also the new local airport of Shanghai and you can fly to Hangzhou," Roubini said.
"There is a no rationale for a country at that economic level to have not just duplication but triplication of those infrastructure projects. The level of it and the cost of it is massive, and a third of it will generate zero cash," he said.
Even the landmark Beijing-Shanghai line, set to launch by the end of the month, faces uncertain profit prospects and many analysts are saying the investment in rail is too much too soon.
At a cost of 220.9 billion yuan, the 1,318-km line linking the capital and financial hub will cost one-way economy class passengers 555 yuan to start, just under the cheapest discounted air ticket.
Speeding passengers through the countryside at 300 kph, the new line will serve as the government's new model for passenger transport.
Professor Zhao cited the line from eastern Henan province's capital Zhengzhou to the Shaanxi city of Xi'an as the perfect example of a white elephant rail project.
"It is basically empty," he said. In the first six months after its launch in February 2010, the railway reported 1.98 million passengers. It was designed for 37 million a year.

NO SLOW DOWN
"We will not slow down the pace, and there will be no cut in investments," Vice Minister of Railways Hu Yadong told a news conference last week.
The ministry's 58.24 percent asset-liability ratio -- as of March -- is no deterrent, with rail development closely linked to national development in the world's most populous country and second biggest economy.
Wang Fang, a senior project officer who focuses on China's railways at the Asian Development Bank office in Beijing, said the MOR should not worry about its debt ratio.
"A debt ratio of 60 percent itself is not worrisome. Many expressways in China have a debt ratio of 70 percent of more. What should be worrying is profitability performance," she said.
JP Morgan rail sector analyst Karen Li said a 4-7 year post-construction profitability target hinted at by MOR's chief economist Yu Bangli was not unrealistic for the line connecting Beijing and Shanghai.
But other lines may be less lucky.
"Typically for infrastructure, healthy building should outpace demand by two to three years. For high-speed rail, at this point, we may be looking at 5 to 10 years ahead of demand, in my view," Li told Reuters from Hong Kong.
"I think much of the railway investment in the past three to five years should have been put into the freight rail side," she said, helping to lower logistics costs which are much higher than in developed countries.

KNOCK-ON BENEFITS
Some experts say the high-speed lines will have wider knock-on benefits for the freight sector and the economy.
New high-speed rails, in theory, will take passenger traffic off old tracks and open them up to freight. With per capita kilometres of rail low compared to developed countries, advocates say if it is going to build a new rail network anyway, China might as well build one that is first class.
Wang Shuang, an analyst with the Industrial Securities in Shanghai, estimates MOR operating losses in 2011 of 96.6 billion yuan, but said rail spending would still boost the economy.
"In terms of a whole region, railways will promote investment along the line in a noticeable way," Wang said, noting that every dollar spent on railway could generate three dollars in investment.
Even before the official launch of the Beijing-Shanghai line, Yu Shouhai, an investment promotion official at Taian, one of the 24 stations along the line, sees great promise. Projects, including a tourist spot called "Tropical Gardens", were launched ahead of an anticipated wave of visitors.
"The new railway line has tremendous meaning for us," Yu said. "Since the announcement of the railway blueprint, investors have been speeding up in putting money down here."
(Editing by Jonathan Thatcher)
Posted by Claude Arpi at 5:58 AM