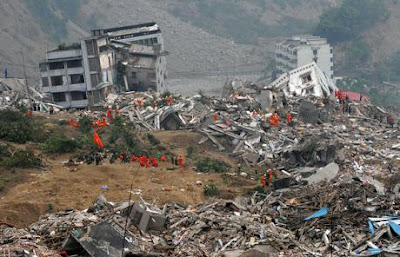 This article found on chinascope.org speaks about the poor quality of the construction in China.
The author says that the average lifespan of a building in China is 25 to 30 years.
I wonder if this rule also applies to other infrastructures such dams.
Remember the Zipingpu earthquake in 2008 in Sichuan.
According to Wikipedia:"The earthquake left at least 5 million people without housing, although the number could be as high as 11 million. ...Catastrophe modeling firm AIR Worldwide reported official estimates of insurers' losses at US$1 billion from the earthquake; estimated total damages exceed US$20 billion. It values Chengdu, Sichuan Province’s capital city of 4.5 million people, at around US$115 billion, with only a small portion covered by insurance.
...Reginald DesRoches, a professor of civil and environmental engineering at Georgia Tech, pointed out that the massive damage of properties and houses in the earthquake area was because China did not create an adequate seismic design code until after the devastating Tangshan earthquake in 1976. DesRoches said: "If the buildings were older and built prior to that 1976 earthquake, chances are they weren't built for adequate earthquake forces."
In the days following the disaster, an international reconnaissance team of engineers was dispatched to the region to make a detailed preliminary survey of damaged buildings. Their findings show a variety of reasons why many constructions failed to withstand the earthquake."
What about the dam itself. It also developed cracks. All this is quite ominous, if one look at the myriad of dams being built in China, more particularly on the rivers originating from the Tibetan plateau.

China’s Short-Lived Buildings
chinascope.org
[Editor’s Note: According to Mr. Qiu Baoxing, vice minister of China’s Ministry of Housing and Urban-Rural Development, the average lifespan of a building in China is 25 to 30 years. A survey by China Youth Daily shows 83.5% of the interviewees believe the primary reason for premature building demolition is “local government leaders want to build their image and embellish their job performance.” The following abridged translation is from an article appearing on www.163.com, one of China’s largest news portals, titled “Why are China’s Buildings Short-Lived?”] [1]
In the early morning on March 30, two high-rise buildings in Ningbo City were demolished in order to make way for the building of a subway. This led to a public controversy over the unique Chinese "short-lived building" phenomenon. Mr. Qiu Baoxing, Vice Minister of China's Ministry of Housing and Urban-rural Development, said China builds the largest number of new buildings in the world, with an average new construction area of two billion square meters each year, but the average life of a building in China is only 25 to 30 years. Many buildings are demolished not because of problems with quality, but because of a lack of careful urban planning and protection of the atmosphere, the worship of GDP growth, and commercial interests.
In a survey conducted by China Youth Daily, 85.8% of the people surveyed indicated that their cities have had "short-lived buildings," and 50.1% were unhappy with their city’s urban planning. When asked about the cause of the short-lived buildings, 83.5% of those surveyed responded, "Local government leaders want to build their image and embellish  their job performance;" 71.8% believed that urban planning lacked scientific principles; other reasons included shabby construction quality (39.6%), developers making a quick profit (36.3%), problematic demolition approval procedures (36.2%), and architectural design problems (28.8%).
Statistics show that, in 2002, a total of 120 million square meters of Chinese urban housing was demolished, which is equivalent to 37.5% of the total of 320 million square meters that were constructed in that same year. In 2003, a total of 161 million square meters of Chinese urban housing was demolished. That represents 34.2% of China’s annual growth, and equals 41.3% of the 390 million square meters of total construction for the same year. China is the world's largest builder in terms of new construction area, with average annual new construction of 2 billion square meters, consuming 40% of the world's cement and steel production, yet what we built can only last for 25 to 30 years.
In 2003, China demolished a total of 161 million square meters of urban housing. Assuming that 200 kg of cement and 60 kg of steel go into each square meter, a total of 32.2 million tons of cement and 9.66 million tons of steel were wasted. This amount is 8.9% of all the cement and steel used in new construction in 2003. If each ton of cement costs 300 yuan and each ton of steel costs 4,000 yuan, the demolitions resulted in a loss of at least 48.3 billion yuan. In addition, since it costs about 145 kg of coal to produce 1 ton of cement and 741 kg of coal to produce 1 ton of steel, a total of 11.83 million tons of coal was wasted.
According to a report by the State authorities of housing construction, the construction of every ten thousand square meters of housing will generate only 500 to 600 tons of construction waste, while the removal of each ten thousand square meters of old buildings will produce 7,000 to 12,000 tons of construction waste. Each year in China, construction waste accounts for 30% to 40% of total municipal trash, and 400 million tons of construction waste are produced each year. The transportation, processing, and storage of this waste have a negative impact on the environment.
International building design specifications are about the same as those in China. As an example, Eurocode 1 and ISO2394: 1998 - both require that housing and other common construction should last 50 years; monuments, other special or important structures, and bridges should last at least 100 years. However, the actual lifespan of buildings in foreign countries is much longer.
When we look at Paris, we do not see many high-rise buildings. Traditional architecture is spread throughout the city with a well-organized layout, giving Paris its unique elegance.
In the 1980s, Japan proposed a "century house" construction concept, using only concrete higher than grade 40 for housing. In China, most short-lived buildings used concrete grade 20. The gap in concrete quality alone shortens the life of Chinese housing by at least ten years. In Japan, 6.6% of all housing is more than 50 years old and 38% is more than 30 years old. In the United States, 31.1% of housing is over 50 years and 58.8% of housing is more than 30 years old.
In Budapest, the government expressly bans the demolition of buildings over 50 years old. In France, the government marks and protects all construction over 20 years old and structures that are known either nationally or internationally.
In Europe, the protection of old buildings is a symbol of civilization. In Britain, France, and other European countries, century-old homes are commonplace. Many old houses are marked with eye-catching Arabic numerals showing the year of construction. This indicates the builders' confidence in the durability of the building, which has been passed down for generations. Residents in today's Europe are also proud to live in older housing. The older the construction, the higher the value.
In China, the causes for many short-lived buildings are the following: a misguided urban development policy, valuing speed over quality, the blind pursuit of GDP growth, and enhancing job performance and developers’ profits. City officials and urban planners should pay more attention to this issue. They should make sure that Chinese cities maintain their own old construction and style during periods of rapid development and avoid demolishing valuable buildings in order to make way for new projects.