For a few beans more 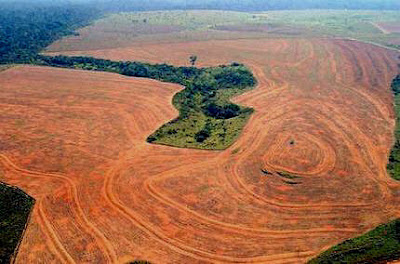 Many observers believe that soybean is planted at such a rate in Brazil that the demand is going to destroy the Amazon rainforest.
Earth First, an  environmental group wrote: "And if worldwide demand continues to multiply the way it has over the past decade, Brazilian officials will likely give in to economic pressure to continue clearing forests in order to plant more of the crop."
Lester R. Brown, the President of the Earth Policy Institute and author of the famous Who will Feed China commented:


Some 3,000 years ago, farmers in eastern China domesticated the soybean. In 1765, the first soybeans were planted in North America. Today the soybean occupies more US cropland than wheat. And in Brazil, where it spread even more rapidly, the soybean is invading the Amazon rainforest.
During the closing decades of the last century, Japan was the leading soybean importer, at nearly five million tons per year. As recently as 1995, China was essentially self-sufficient in soybeans, producing and consuming roughly 13 million tons of soybeans a year. Then the dam broke as rising incomes enabled many of China’s 1.3 billion people to move up the food chain, consuming more meat, milk, eggs and farmed fish. By 2009 China was consuming 55 million tons of soybeans, of which 41 million tons were imported, accounting for 75% of its soaring consumption.
Since 1950 the world soybean harvest has climbed from 17 million tons to 250 million tons, a gain of more than 14-fold. This contrasts with growth in the world grain harvest of less than fourfold. Soybeans are the second-ranking US crop after corn, and they totally dominate agriculture in both Brazil and Argentina.

Now China is buying lakhs of acres of land to plant soybeans in Brazil.
The Brazilian government is applauding: "We welcome Chinese investment in Brazil", this not land grabbing.
Fine, but Brazil still has a problem, if it ready to gave away its own fertile soil for a few beans (or yuans) more.
Moreover, this problem is very much linked to our previous posting and the possibility to divert the Brahmaputra.
China needs water to grow food: either it diverts the waters flowing to South Asia or it grows the food abroad. Or both!

China's Land Purchases in Brazil
China Review News
June 6, 2011
The cheap land in Brazil has attracted massive investment from foreign individuals and companies, including Chinese. By October 2010, China's state-run Chongqing Grain Group Co., Ltd. had developed 800,000 mu (131,790 acres) of soybean plantation farmland in Brazil. It plans to reclaim one million mu (164,736 acres) more farmland, for a total investment of over 5 billion Chinese yuan (US$771 million), making Brazil China's largest overseas soybean oil production base.
In addition, Zhejiang Province's Fudi Agricultural Co., Ltd. has invested 200 million yuan (US$31 million) in the purchase of 16,800 hectare of Brazilian land for a soybean plantation. Meanwhile, China National Cereals, Oils and Foodstuffs Corporation (COFCO), China's largest state-owned food giant, has also shown interest.
Ye Anping, an official from China's Ministry of Agriculture, denied that the purchase is a land grab. "Local business enterprises' land purchases overseas have nothing to do with the policies of the Ministry of Agriculture," said Ye. At the same time, the Brazilian Embassy in China stated, "We welcome Chinese investment in Brazil."
Posted by Claude Arpi at 7:26 AM