And Long and Dark shall be the Night 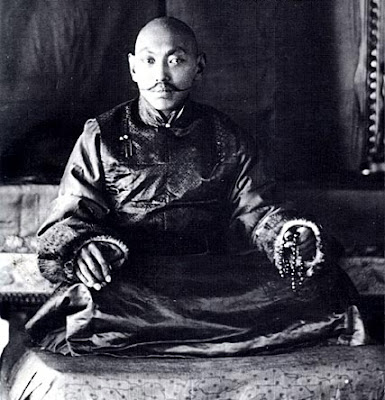 Very sad news heard on Radio Free Asia!
The house of the Thirteenth Dalai Lama has been demolished by the People's Liberation Army.
Can you imagine the house where Abraham Lincoln or Churchill or Napoleon Bonaparte lived, being brought down to build army barracks?
Is it the hallmark of a civilized society?
Once again, it shows that in Tibet, China acts purely as a colonizer .
Are we living in the 21st or the 19th century?
The Testament of the Great Thirteenth Dalai Lama comes to my mind:


However, the Gods whom I followed like a shadow, the venerable teachers, those who reveres me, those who offered me their wealth and property, the rich and the poor, they, my subjects, all have not only in words but in heart imposed upon me their hopes and aspirations. Because of this, I can not think of giving up my responsibilities. Therefore, with what little I know, I am trying my best to serve you all earnestly and honestly. But remember I am now reaching my fifty eighth year and as you all are aware that between me and the new reincarnation there will be a period when there will be no ruler.
Therefore take measures now. Maintain friendly relations with the two great powers, China and India, conscript able soldiers to guard the borders and make them sufficiently strong to ward off those countries with whom we have had border disputes. The armed forces should be drilled and disciplined so as to be effective and strong to overcome those who threaten us. These precautions should be taken at a time when the forces of degeneration are most prevalent and when Communism is on the spread.

Remember the fate that befell the Mongolian nation when Communists overran the country and where the Head Lama's reincarnation was for-bidden, where property was totally confiscated and where monasteries and religion were completely wiped out. These things have happened, are happening and will happen in the land which is the Centre of Buddhism [Tibet].

If you are not able to defend yourselves now, the institutions of the Dalai Lama, venerable incarnates and those who protect the Teachings shall be wiped out completely. Monasteries shall be looted, property confiscated and all living beings shall be destroyed. The memorable rule of the Three Guardian kings of Tibet, the very institutions of the state and religion shall be banned and forgotten. The property of the officials shall be confiscated; they shall be slaves of the conquerors and shall roam the land in bondage. All souls shall be immersed in suffering and the night shall be long and dark.

Now, when there is peace and happiness, when you have the power, work, work earnestly and wholeheartedly for the general welfare. Use peaceful methods where peace is due, use force where force is necessary: work and persevere now, that there are no regrets later. In your hands, officials of the Government, the holders of the Teachings and my people, lies the future of the country. Without employing wrong and base methods, rise up together and work for the general good of the land. If you do, we too will have the assurance and protection given by the State Oracle to Guru Rinpoche and the lineage of the previous Dalai Lamas.

For my part, to those who work and persevere for the general good, I offer them my prayers and blessings. For those who only work for their own welfare, the fate and Karma will take care of them. Though they might prosper for some time, leaving aside their Government duties and watching the time pass, all I see is disaster in the future. It would be too late then to regret.
In my lifetime conditions will be as they are now, peaceful and quiet. But the future holds darkness and misery. I have warned you of these things because of my experience and other important reasons.

More I cannot say or advise.

13th Dalai Lama's Home Demolished
2011-06-15
Chinese authorities reject family appeals to protect historic site.
A backhoe demolishes the former family home of the 13th Dalai Lama in Thakpo, Tibet, June 10, 2011.
Chinese authorities have demolished the century-old Langdun family residence of Tibet’s 13th Dalai Lama despite appeals to protect the heritage site, a Tibetan source close to the Langdun family said.
The house of Thupten Gyatso, predecessor to the current Dalai Lama, the exiled spiritual leader of Tibet, was situated close to the Kyichu river, south of Lhasa, capital of the Tibet Autonomous Region.
It was located in an area controlled by the Lhasa Military Center and was declared a "historic structure to be protected," said the source, who lives in Tibet.
He said that demolition of the house began on June 10.
“This historic house about 100 years old with ties to the 13th Dalai Lama was demolished within a short time,” he added.
The 13th Dalai Lama, often referred to by Tibetans as the “Great 13th,” was born to a peasant couple in Dakpo in southern Tibet.
“Family members of the Langdun household appealed to the Lhasa city government to protect [the residence] from demolition, but they were disappointed," the source said.
"City authorities explained that they were helpless when the house is located in the area controlled by Lhasa Military Center.”
Authorities tightlipped
Contacted for details of the demolition, a female official of the Lhasa Military Center said, "I am sorry, I don’t know about it.”
Thupten Gyatso was recognized by Tibetan religious authorities as the reincarnation of the 12th Dalai in 1877.
The 13th Dalai Lama ruled Tibet during a British invasion of the country in 1904 and a Chinese invasion in 1909/10, but survived both experiences with his authority enormously enhanced, according to the website of the current Dalai Lama.
He later predicted China’s 1950 invasion of Tibet and died at the age of 57 in December 1933 after urging modernization of the Tibetan Army.
The current Dalai Lama, who fled to India after a failed 1959 national uprising against Chinese occupation, has been the face and symbol of the Tibetan freedom struggle for more than five decades.
Reported by Yeshi Tashi for RFA's Tibetan service. Translated by Karma Dorjee. Written in English by Parameswaran Ponnudurai and Richard Finney.
Copyright © 1998-2011 Radio Free Asia. All rights reserved.
Posted by Claude Arpi at 7:09 AM