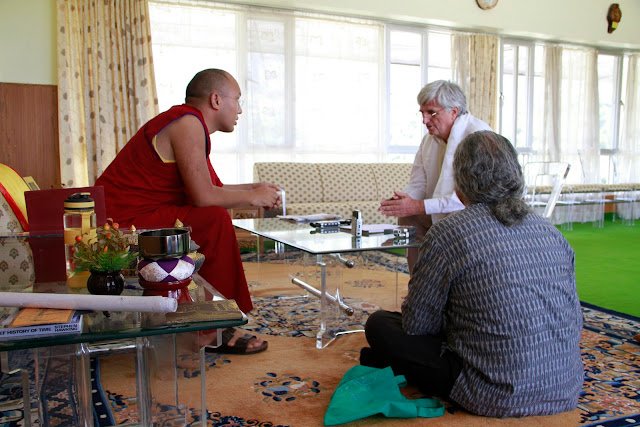 While approaching the Gyuto Ramoche monastery in Sidhbari near Dharamsala in Himachal Pradesh, one is immediately struck by the pervading peace of the complex. Since 2000, the Gyuto or Upper Tantric College, has offered as temporary accommodation, a wing of its premises, to the 17th Karmapa Lama, Ugyen Thinley Dorje, who has been in the news in recent months.
The 26-year old Lama lives here, surrounded by relatively tight security, with the majestic Dhauladhar range as a background.
Till now, apart from a few statements issued by his office, the young Lama has refused to come out of his reserve and comment on the accusations levelled against him, particularly the cash donations received by his monastery but not deposited in a bank, and his relations with India.
For the first time, he agrees to speak to Rediff.com in an exclusive interview to Claude Arpi, who also interviewed the newly elected prime minister of Tibet, Lobsang Sangay, in Dharmsala.
Throughout the interview, one discovers a remarkable calm young man, deeply interested in Indian culture, in art and the environment of the Himalayas, who is able to see the deeper meaning of the controversies that have surrounded him since he fled from Tibet in 1999, under amazing circumstances.
He takes time to answer each question, knowing perfectly the importance of his words. He usually prefers to speak through his interpreter, except for the last questions where he showed his proficiency in English and his sense of humour.

Your Holiness, can you tell us about your relations with India, which is often misunderstood?

My relationship to India is not something limited to the life of a single individual. This important relationship between the Karmapa lineage and India has a long history that goes back 900 years.
This relationship cannot be separated from this context. The Buddhist lineage was introduced more than 1,200 years ago in Tibet. The beginning of my own [Karmapa] lineage started 900 years ago, and its traditions are firmly rooted in India. The entire history of our lineage goes back to India. The lineage transmitted by the Karmapa comes from India, and was passed through the great Indian Mahasiddha Tilopa and Mahapandita Naropa, whom we revere as our forefathers in this Dharma lineage. Without these Indian sages as predecessors, the history of the Karmapas lineage would have not come into existence. Thus the Karmapa lineage itself is rooted deeply in the very soil of India.
Continuing with this historical background, at the end of the 1950s, when Tibet went through a critical period, Tibetans turned to India. Not only did they turn to India, but India responded warmly and since then has truly been a generous host for the Tibetan people -- not only for His Holiness the Dalai Lama but also for the many tens of thousands who took refuge [in India] and who now form the Tibetan diaspora. India has been a great host; India extended her hospitality to the displaced Tibetan people, for whom that hospitality was not a mere formality, but a matter of life or death.
On top of this, India has provided a sanctuary for the preservation of our Buddhist religious and cultural heritage as well as our Tibetan culture in general.
When the times were so difficult, when we were in such an utterly helpless situation, to whom did we turn? To India! And India provided the refuge we so desperately needed.
Even someone like me, born after 1959, I have heard so much about the kindness and generosity of the Indian people after 1959. It is much talked about among Tibetans. In my generation, there is a general attitude of gratitude towards India to the extent that when Tibetans think of a place for refuge, a land of peace and freedom, where the meaning and purpose of our life can be fulfilled, we immediately think of India. This is why the Tibetan people, myself included, have eagerly turned to India for refuge. We have the feeling that just by reaching the holy land of India, we have accomplished something of great meaning in our lives.