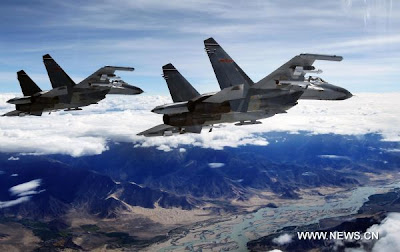 In August 2010, in an article in The South China Morning Post, John Garnaut asserted: "A Chinese two-star general has warned his conservative Communist Party masters and firebrand People's Liberation Army colleagues that China must either embrace US-style democracy or accept Soviet-style collapse."
Lt General Liu Yazhou was then Political Commissar of the PLA's National Defense University. His declarations caused quite a stir in China.
Ten months later, an article in the China Brief of the Jamestown Foundation speaks of the probable promotion of General Liu.
Dr Zhang, an Associate Professor in the Department of Leadership and Strategy at the Air War College (USAF), in an article The Leadership of the PLAAF after 2012 said that General Lui "is inline as the next Political Commissar of the entire PLAAF."
Dr. Zhang explained: "As one of the few PLA generals who have had Western experience, Liu spent one and half years at Stanford University as a visiting scholar in 1986 and 1987. He has written extensively about PLAAF strategy, having been recognized by many Chinese analysts as the 'Douhet of China' [Douhet was an Italian general, proponent of strategic bombing in aerial warfare] because of “his reputation as a daring forward thinker of air power theory” against the PLAAF’s traditional mindset."
The China Defence Blog commented: "If Dr Zhang's prediction is correct, expect to see a different PLAAF five years from now under General Liu's new leadership."
According to Dr Zhang: "As early as 2000, Lt General Liu Yazhou proposed that Chinese military authorities consider reorganizing the PLAAF into functional air commands by separating the air force from the PLA military region (MR) system to become a true independent service. Ostensibly to make the PLAAF a more offensively oriented air force, he further recommended the use of the U.S. Air Force’s “expeditionary force” model to organize air force units into air strike groups with a mix of fighters, bombers, and early warning aircraft. His advocacy for eliminating the ground force dominated military system, however, has received little support from the PLA military establishment."
We have recently seen the limits of this theory in Libya, but the other issue is: what will happen to General Liu Yazhou's ideas about democracy, if he makes it to his new post? Will he try to implement them?
Let us watch.

China must reform or die
JOHN GARNAUT
August 12, 2010
A Chinese two-star general has warned his conservative Communist Party masters and firebrand People's Liberation Army colleagues that China must either embrace US-style democracy or accept Soviet-style collapse.
As officers of similar rank rattle their sabres against US aircraft carriers in the Yellow and South China seas, General Liu Yazhou says China's rise depends on adopting America's system of government rather than challenging its dominance off China's eastern coast.
''If a system fails to let its citizens breathe freely and release their creativity to the maximum extent, and fails to place those who best represent the system and its people into leadership positions, it is certain to perish,'' writes General Liu Yazhou in Hong Kong's Phoenix magazine, which is widely available on news stands and on the internet throughout China.
The fact of General Liu's article suggests China's political and ideological struggles are more lively than commonly thought, ahead of a rotation of leaders in the Central Military Commission and then the Politburo in 2012.
''The secret of US success is neither Wall Street nor Silicon Valley, but its long-surviving rule of law and the system behind it,'' he says. ''The American system is said to be 'designed by genius and for the operation of the stupid'.
''A bad system makes a good person behave badly while a good system makes a bad person behave well. Democracy is the most urgent thing, without it there can be no sustainable rise.''
General Liu was promoted recently from deputy political commissar of the PLA Air Force to political commissar of the National Defence University. His father was a senior military officer and his father-in-law was Li Xiannian, one of Chinese communism's ''Eight Immortals'' - and a one-time president of China.
While many of China's ''princelings'' have exploited their revolutionary names to amass wealth and power, General Liu has exploited his pedigree to provide protection to push his contrarian and reformist views.
But General Liu's latest writings are extraordinary by any standards. His article urges China to shift its strategic focus from the country's developed coastal areas, including Hong Kong and Taiwan - ''the renminbi belt'' - towards resource-rich Central Asia.
But he argues that China will never have strategic reach by relying on wealth alone. ''A nation that is mindful only of the power of money is a backward and stupid nation,'' he writes. ''What we could believe in is the power of the truth.
''The truth is knowledge and knowledge is power.''
But such national power can only come with political transformation. ''In the coming 10 years, a transformation from power politics to democracy will inevitably take place,'' he says.
General Liu inverts the lesson that Chinese politicians have traditionally drawn from the collapse of the Soviet Union - that it was caused by too much political reform - by arguing that reform arrived too late.
Since 2008 the Communist Party has steadily tightened the political screws to stifle dissent.
Many Chinese are concerned that reforms have been blocked by powerful military, security, corporate and family groups that benefit from the status quo.
General Liu was famously outspoken until he stopped publishing his essays about five years ago.
It is unclear how his latest article appeared and whether he has backing within the system.
Last year Hong Kong's Open magazine published a leaked report of one of General Liu's internal speeches which raised the taboo topic of how some generals refused to lead troops into Tiananmen Square in 1989.
General Liu returned to the subject of Tiananmen in his Phoenix article, saying ''a nationwide riot'' was caused by the incompatibility of traditional power structures with reform.
Read more: http://www.smh.com.au/world/china-must-reform-or-die-20100811-11zxd.html#ixzz1OduHJZDw
Posted by Claude Arpi at 7:11 AM