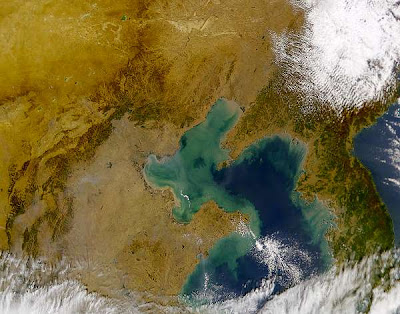 Apparently, the diversion of the Brahmaputra is in competition with another diversion: the idea is to pump water from the Bohai Sea, the innermost gulf of the Yellow Sea on the coast of Northeastern China and push it up to Xinxiang.
The Chinese press reported that on November 5, 2010, the Xinjiang People’s Government Development Research Center and Institute of Western and Eastern Economy sponsored a conference in Wushi to discuss 'The Plan for the Diversion of Sea Water to Western China'.
Over 120 experts from throughout China gathered to find a solution to the water issue which is obstacle for Xinjiang's development: “Huo Youguang, a professor at Xian Transportation University, along with Chen Changli, a professor at China University of Geosciences, came up with the basic idea of diverting seawater from the Bohai Sea to Xinjiang. They believe that such a diversion project can thoroughly improve the deteriorating environmental conditions of north and northwest China.”
Later, it was announced that the Development and Reform Commission [Planning Commission] of Inner Mongolia and Liaoning province had approved the project and that five construction sites related to the project had become operational. This was later denied.
On November 17, 2010, Xinhua published a news item under the title Experts: Water diversion from Bohai to Xinjiang unfeasible (see below).
A similar discussion will probably take place for the Great Western Diversion (the diversion of the Brahmaputra).
Some scientists/bureaucrats will say it is ‘impossible’; some will argue, 'we can do it'.
The fact remains that today, China is badly in needs:
1- To stop the desertification in Xinjiang, Gansu and Inner Mongolia
2- To have the Yellow running again
3- To feed its people (for which water is required)
If such grandiose and seemingly unrealizable projects are even thought of, it is because the situation is quite desperate and nobody is able to foresee any better solution.
But Beijing should look again into the disastrous performances of the Gorges Dam and the two first legs of the Diversion scheme (Eastern and Central parts) before taking a hurried decision.

Experts: Water diversion from Bohai to Xinjiang unfeasible
November 17, 2010
Source:Xinhua
A proposal to divert water from the Bohai Sea on China's eastern coast to Xinjiang Uygur Autonomous Region in the far west to fight deserts and sandstorms is "unfeasible" and an "illusion," water resources scientists and experts said Tuesday.
They made the remarks while responding to questions at a press conference in Beijing concerning a study on Xinjiang's water strategy and sustainable development.
Shi Yulin, an academician at the Chinese Academy of Engineering and a research fellow at the Institute of Geographic Sciences and Natural Resources Research of the Chinese Academy of Sciences, said the salt contained in the huge amount of diverted sea water could further encrust the saline land in Xinjiang.
Li Zechun, an academician at Chinese Academy of Engineering, and former director of National Climate Center, said the sea water could not produce sufficient vapor to create enough rainfall to affect the climate in northwestern regions.
Ning Yuan, former deputy director and research fellow of the South-North Water Diversion Project Commission (SNWDPC) of the State Council, said the Bohai Sea was 5,000 km from Xinjiang, five times the distance of the South-North Water Diversion from Danjiangkou, in central Hubei Province, to Beijing.
That meant the laying of a pipeline, the huge cost of the project, and the water distribution were all problems "beyond imagination," Ning said.
In a widely reported meeting on November 5 in Urumqi, capital of Xinjiang, researchers and local government officials discussed the proposal to divert water from east China to the west.
According to the proposal, the huge amount of sea water, if diverted to the west, could form man-made lakes and rivers and serve as vapor source to create more rainfall to contain the threat of desertification in north and northwest China.
Posted by Claude Arpi at 7:53 AM