While India is busy with Games 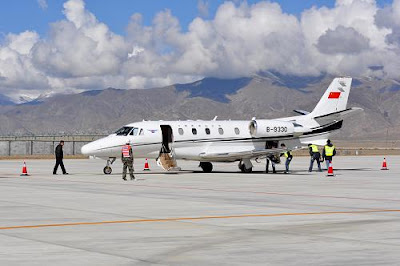 While India is busy with the postmortem of  the Games, China is working hard to develop a modern infrastructure of roads, railway line and airports in Tibet.

What to say?
It is irritating as the Chief of Army Staff recently said: "We have two irritants. One, mainly in terms of how the situation is, in Pakistan where there is a problem of governance, where there is certain amount of support that is being given to some terrorists and where the internal situation is not very good, ....Similarly, we have a rising China, both economically and militarily. Although we have CBMs in place, although we have a very stable border, yet we have a border dispute."
In the meantime, the government continues to 'appease' China. DNA reported: "Anticipating the matter to come up in talks between prime minister Manmohan Singh and his Chinese counterpart Wen Jiabao in Hanoi, Vietnam, on October 29, the government has told Delhi-based Jamia Millia Islamia University to suspend conferring an honorary doctorate on Tibetan leader in exile the Dalai Lama. Dalai Lama was to get the honour in November. The government obviously does not want to create further tension."
This is also irritating.


New Airport in Shigatse (Xigaze)
Tibet to open 5th civil airport next month
English.news.cn
2010-10-21
LHASA, Oct. 21 (Xinhua) -- The fifth civil airport in China's Tibet Autonomous Region will open early next month, civil aviation authorities said Thursday.
Xigaze Peace Airport, located in Xigaze Prefecture, 48 km from Xigaze City, is 3,782 meters above sea level.
The airport terminals, decor, facilities and flight tests were completed, allowing it to officially open in early November, said Zhu Feng, secretary of the airport's Communist Party of China (CPC) branch.
However, Zhu said, no exact date had yet been set for the opening.
Construction, with an investment of 489 million yuan (74 million U.S. dollars), began on April 29 last year.
The airport is expected to have handled 230,000 passengers and 1,150 tonnes of cargo by 2020, according to the Civil Aviation Bureau of Tibet Autonomous Region.
Tibet has four other civil airports in Lhasa, Nyingchi, Qamdo and Ngari.
In the past five years, China has invested heavily in building transport infrastructure in Tibet, pouring money into construction of highways, railways and airports to stimulate Tibet's weak economy and tourism. 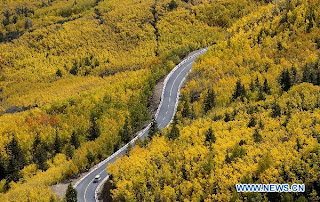 Chamdo West Road inaugurated
2010-10-22
Jan, Mu Yuan & Drolma
China Tibet Online
The inauguration ceremony of Chamdo West Road is held at the newly built Conference Center in Chamdo Prefecture, Tibet Autonomous Region (TAR), photo taken on Oct. 21 by Drolma from China Tibet Online.
On Oct.21, the ceremony marking the completion of Chamdo West Road renovation project was held in Chamdo Prefecture, Tibet Autonomous Region (TAR).
Chamdo West Road, the main road in Chamdo County, takes on a modern look after the 6-month renovation.
"The Chamdo Conference Center is not only a key project dedicated to the 60th anniversary of the liberation of Chamdo, but also a project (including the construction, installation and decoration) of an extra aid-Tibet project with the fund allocated by the Prefectural Party Committee and Prefectural Government. 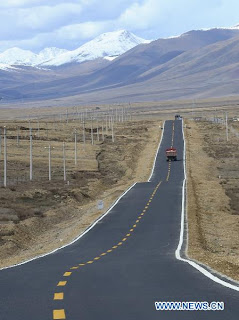 The Center covers an area of 18036.4 ㎡with a total investment of 99 million yuan. The construction of the center formally broke ground in June 2009 and was completed in Aug. 2010. As the host to various important events in Chamdo, the center is composed of a conference hall of 750 pax, a ballroom of 350 pax, Video Conference Rooms, etc. " said Wang Wei, Secretary General of Chamdo Local Administrative Office.
The renovation project of Chamdo West Road started on April 28th, 2010 with a total fund of 32.6 million yuan. The project included painting 39 buildings along the street with a total construction area of 88295 ㎡, fixing outdoor stairway of 2568 ㎡, decorating buildings and side walks, reinforcing guardrails, etc.
"Extending along dilapidated houses, the street used to look very old and shabby. Thanks to the renovation, the environment of the urban area has been improved with accessible transport facilities,"Dawa Tsering, the 55 year-old citizen of Chamdo, said happily. 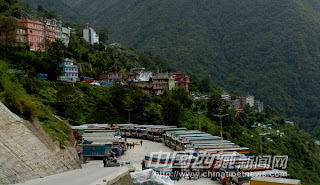 First large parking lot open at Zham Port, Shigatse
2010-10-21 elle li
China Tibet Online
Photo shows the newly opened parking lot at Zham Port, Shigatse Prefecture, southwest China's Tibet Autonomous Region (TAR),photo from Tibet Daily.
The first parking lot was recently opened at the Port of Zham of Nyalam County, Shigatse Prefecture of southwest China's Tibet Autonomous Region (TAR).
With an overall area of 12,000 square meters, the parking lot cost 18 million yuan and is expected to hold over 300 trucks.
The new facility has largely improved the infrastructure of the Port, ensuring further development of the local border trade.
In the past, there wasn't a large parking lot at Zham Port and its development was restricted somewhat by traffic congestion.
Posted by Claude Arpi at 7:26 AM