Visit of the French Chief of Defence Staff 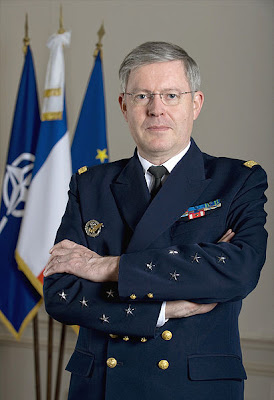 On the occasion of the visit of the French Chief of Defence Staff (Chef d'Etat major des Armées, CEMA) to India, I post here an article on The French Connection — Friendship to Partnership written a few years ago and published in the Indian Defence Review. Click here to read.


French military chief on India tour ahead of Sarkozy's December visit
Times of India
Oct 15, 2010
NEW DELHI: Ahead of French President Nicolas Sarkozy's visit to India in December, the country's chief of defence staff Admiral Edouard Guillaud will be coming here on Saturday to discuss ways to further bolster bilateral defence cooperation.
Admiral Guillaud, during the four-day visit, is scheduled to hold talks with national security advisor Shivshankar Menon as well as the three Service chiefs -- Air Chief Marshal P V Naik, Admiral Nirmal Verma and General V K Singh.
The admiral will also be visiting Mumbai-based Western Naval Command and Mazagon Docks, where the Rs 23,562 crore French Scorpene submarine project is currently underway. The project, under which six submarines were to roll out one per year from 2012 onwards, has been hit by a three-year delay and huge cost escalation.
The French CDS' visit comes at a time when the two countries are also poised to clinch the over $2.1 billion deal to upgrade the 56 multi-role Mirage-2000s, first inducted in the mid-1980s, in IAF combat fleet. The deal is likely to be inked during Sarkozy's visit, as reported earlier.
India and France have been negotiating the upgrade of the Mirage-2000s for over three years but it is only now that they have narrowed down their differences over the project cost.
The upgrade price earlier being demanded by French companies Dassault Aviation (aircraft manufacturer), Thales (weapons systems integrator) and MBDA (missile supplier) was around 30% more than what India was ready to pay.
In the upgrade, the fighters will get new avionics, radars, mission computers, glass cockpits, helmet-mounted displays, electronic warfare suites, jam-proof communication with data links, weapon delivery and precision-targeting systems, including all-weather, fire-and-forget MICA (interception and aerial combat missiles) systems.
The first four to six Mirages will be upgraded in France, while the rest will be upgraded in India by Hindustan Aeronautics with transfer of technology.
The French Rafale fighter, incidentally, is also one of the six contenders in the race to bag the $10.4 billion project for the acquisition of 126 medium multi-role combat aircraft (MMRCA) for IAF.
Read more: French military chief on India tour ahead of Sarkozy's December visit - The Times of India http://timesofindia.indiatimes.com/articleshow/6749302.cms?prtpage=1#ixzz12U1QOZCu
Posted by Claude Arpi at 7:44 AM