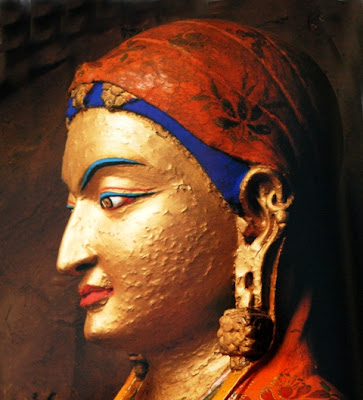 After marrying a Nepalese and a Chinese Princess, King Songtsen Gampo converted to Buddhism. These two marriages played a
crucial role in the spread of the new faith in Tibet.
More than hundred years later, King Trisong Detsen invited Shantarakshita, the Abbot of Nalanda to teach the Buddha Dharma and ordain the first monks. Shantarakshita immediately faced serious difficulties due to the strong opposition from the indigenous Bon. He convinced the king that only way out was to invite the Tantric Master, Guru Padmasambhava; he alone could subdue the forces adverse to Buddhism.
Shantarakshita also predicted that a dispute would arise between the two schools of Buddhism, the Indian and the Chinese. The issue was sorted out through the famous Samye Debate. After 2 years of intense discussion, the Indian path prevailed and a proclamation was issued stating that the Indian path was thereafter the orthodox faith.
Chinese historians have a tendency to forget that Bhrikuti, the Nepalese princess ever existed. For example in the White Paper on Tibet's Ownership published by the State Council in 1992 there is no trace of Bhikuti.
The White Paper says "Tibet is located in southwest China. The ancestors of the Tibetan race who lived there struck up links with the Han in the Central Plains long before the Christian era. Later, over a long period of years, the numerous tribes scattered on the Tibet Plateau became unified to form the present Tibetan race. By the Tang Dynasty (618-907), the Tibetans and Hans had, through marriage between royal families and meetings leading to alliances, cemented political and kinship ties of unity and political friendship and formed close economic and cultural relations, laying a solid foundation for the ultimate founding of a unified nation. In Lhasa, the capital of the Tibet Autonomous Region, the statue of the Tang Princess Wen Cheng, who married the Tubo tsampo [Songtsen Gampo], king of Tibet, in 641, is still enshrined and worshiped in the Potala Palace."
Now Bikruti has reappeared, just because Nepal is needed by Beijing to extend its influence over the Himalayan region. Nepal has fast becoming China's ally against India. Read the report of the Nepali President's visit to Lhasa.


Prez Yadav visits Potala Palace
The Himalayan Times
2010-10-27
LHASA: President Dr Ram Baran Yadav visited the Potala Palace, a place of historic, archaeological and religious importance, here this morning.
The Potala Durbar was listed in the list of Word Heritage Sites in 1994 by the UNESCO.
President Dr Yadav was welcomed by the deputy chief of people’s government of Tibet Autonomous Region (TAR).
The Potala Durbar was built by Songtsen Gampo some 1,300 years ago. Songtsen Gampo had married to Nepali princess, Bhrikuti, who is also the national luminary of Nepal. The 12-storied palace built into a stone like structure has 1,000 rooms.
The rooms are well decorated with the artistic idols of the Dalai Lamas, religious gurus, Songtsen Gampo, his wife Bhrikuti and another queen Wencheng.
The room having the idol of Bhrikuti was opened today.
Similarly, there is a large idol of the Dalai Lama Zamling Gyanchi weighing 721 kgs.
It had taken some 40 years to construct the palace where the tourists are allowed to visit in limited numbers based on the weight bearing capacity of the structure.
The palace has also relics inscribed in Nepali language depicting the art and culture of Nepal.
President Dr Yadav also visited Chokhang temple here and acquired various information about it.
The temple built circa 850 AD was named after Songtsen Gampo’s queens Wen Cheng and Bhrikuti.
Famous pilgrimage site for the Buddhists, the temple has the main gate facing Nepal, the birthplace of Bhrikuti. One can see the letters carved in Nepali language in various places of the temple where the idols of Lord Buddha have been installed.
On the occasion, President Dr Yadav also visited the Nepali market on foot at local Bharbor for some twenty minutes and acquired information about it.
Full of hustle and bustle as in Asan and Indra Chowk of Kathmandu, the bazaar is dwelt by the local Nepali community which is involved in trade.
Present on the occasion were the members of the visiting team and Consular General Ngaindra Prasad Upadhyay and other employees.
Moreover, President Dr Yadav inspected a new University in Tibet today.
The largest and well facilitated university of TAR has 1,070 people including the lecturers and employees.
The University Chief, Professors and the officials had welcomed President Yadav and briefed him about the university.
The President's entourage comprises the President’s daughter Anita, Minister for Tourism and Civil Aviation Sharat Singh Bhandari, President’s advisor duo Dr Surya Prasad Dhungel and Hari Sharma, Nepali Ambassador to China Tanka Prasad Karki, Secretary at the President’s Office Baman Prasad Neupane, Foreign Secretary Dr Madan Kumar Bhattarai, Protocol Officer Muktinath Bhatta, Consular General at Lhasa Ngaindra Prasad Upadhyay, Chinese Ambassador to Nepal Qiu Gouhong, high level officials and journalists.
President Dr Yadav will leave for Sian today on completion of his two-day visit to Tibet.
The President had arrived here on Tuesday on a weeklong goodwill visit in connection with his participation in the concluding ceremony of the Shanghai Expo-2010.
Meanwhile, chief of the People's Government of Tibet Autonomous Region (TAR) of China, Padma Choling paid a courtesy call on President Dr Ram Baran Yadav here today.
On the occasion, President Dr Yadav reiterated Nepal's commitment to one-China policy and expressed the determination to not allow Nepali territory to be used against China.
During the meeting, Dr Yadav also urged to speed up the campaign to extend road network up to the border transit points.
Noting that constitution writing and peace process is underway in Nepal, President Dr Yadav said, "Nepal expects support from China and Tibet in this regard."
The President also stressed on the need for a common concern and interest in improving the living standard of the people of the two countries through collaboration in the industry and trade sector.
On the occasion, Chief of the People's Government of Tibet, Padma expressed the confidence that activities against Tibet and China would not take place in Nepal, as Nepal has been giving high priority to one-China policy.
Referring to the cooperation of the Central Government to Nepal in expansion of road network, hydropower, infrastructure development, education and health among others, Padma said Tibet is also ready to provide cooperation as much as possible in the economic and commerce sector along with building the road network.
President Dr Yadav also attended a reception organized in his honour by the Chief of the People's Government of Tibet.
Also present on the occasion were Dr Yadav's daughter Anita, Minister for Tourism and Civil Aviation, Sharat Singh Bhandari and other members of the entourage.
Posted by Claude Arpi at 8:52 AM