Where are the Waters? 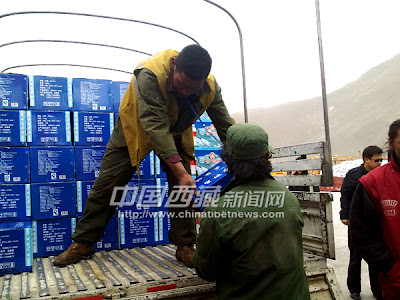 This article in Xinhua (in Chinese) highlight what many believe to be the No 1 problem of China. How to solve it? The only place where one can still find water is Tibet. Why not to divert some of the Roof of the World's rivers to the mainland, particularly to North China? Many are thinking about it, simply because there are no other solution.


Deputy Minister of Water Resources: Serious Water Shortage in the North
Xinhua,
October 7, 2010
Hu Siyi, the Deputy Minister of Water Resources, recently announced that the situation regarding the lack of water in northern China is getting worse due to the double pressure of global climate change and large-scale economic development. For example, the Haihe River Basin surface water level dropped 41% during the past two to three decades. The urbanization of China is speeding up rapidly. Meanwhile, the acceleration of industrialization is resulting in a rapid increase in water usage. During the past four years, just the energy and heavy chemical industries alone consumed 10 billion cubic meters more water. Hu believes that water conservation faces unprecedented challenges.
Posted by Claude Arpi at 7:10 AM