My interview with Hervé Morin 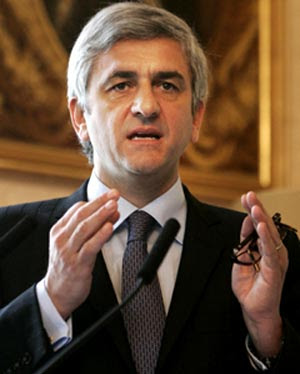 Though the PTI communiques do not mention my name, my interview with Mr. Hervé Morin, the French Defence Minister for the Indian Defence Review is getting a good coverage.

France pitches of India joining operations overseas
New Delhi, Oct 17 (PTI)
Ahead of French President Nicolas Sarkozy's visit to India this December, France has made a pitch for the two nations to cooperate in operations where both their armed forces are deployed, including in the anti-piracy efforts in Gulf of Aden.
French Defence Minister Herve Morin also wants to further enhance consultations between the two counties on regional issues such as terrorism and situation in Afghanistan, apart from looking at joint development of arms taking a cue from Maitri surface-to-air missiles and Kaveri engine for the 'Tejas' fighter jets.
"As I had the opportunity to convey to Defence Minister A K Antony during my visit in December 2009, we can go even further in enhancing our consultations on the regional situation -- I am specifically referring to Afghanistan, where France is engaged -- but also on major international issues," he said in an interview in the coming issue of the 'Indian Defence Review' magazine.
"We could also intensify our cooperation at the theatres of operation where both our armed forces are deployed, piracy in the Indian Ocean and the Gulf of Aden being such a case.
"Lastly, we could develop more armament programmes that are efficient and adapted to the needs of both armed forces," he said to a question of how Indo-French strategic partnership could be improved in the Defence sector.
Morin's remarks come at a time when French Chief of Defence Staff Admiral Edouard Guillaud is here on a four-day visit since yesterday.
Referring Sarkozy's emphasis on several occasions that Indo-French partnership contributing to stability and peace not only in the region but also globally, Morin said the French President's December visit would enable progress in bilateral relations even further in all its facets, "be it facing common threats, or intensifying operational cooperation, or bringing the projects for equipping the Indian armed forces, launched together, to their fruition."
He said the cooperation between the two nations "concerns the very heart of our security: counter-terrorism."
"This is even more indispensable as we often face similar kinds of threats in Afghanistan, in Europe and in India, as borne out by the attacks in Mumbai in November 2009. Further, we have a very promising operational cooperation, be it regarding anti-piracy, joint exercises or officer exchanges," he added.
The French Defence Minister also pitched for his country's 'Rafale' fighter jet that was a competitor in the USD 11 billion Medium Multi-Role Combat Aircraft (MMRCA) 'mother of all deals' tenders, saying it was "an exceptional aircraft" which met the needs of the Indian Air Force (IAF).
PTI

INDO-FRENCH 2LST (SUNDAY)
With regard to defence equipment, Morin said France's own history had made it "extremely sensitive" to India's desire to favour local production and development of its defence industries.
"This relation has always been characterised by mutual trust and technological cooperation. As always, we are following the true course of partnership," he said, listing the supply of Mirage-2000 fighter jets since the late 1980s and construction of the Scorpene submarine by Mumbai-based Mazagon Docks in collaboration with French companies as examples.
"Scorpene is a project to which we feel totally committed, in support of our Indian partners," he added.
On the modernisation of the IAF's Mirage-2000 fleet, Morin said he earnestly hoped that the upgrade programme for the fighter jets would be executed by French companies Dassault, Thales and MBDA. "I am confident that the negotiation of this contract will reach speedy conclusion," he added.
Regarding the Maitri missiles project, the French Defence Minister said the MBDA-DRDO joint effort was "unprecedented" involving extremely ambitious transfers of technology.
"The anti-aircraft defence system (is being) developed in India, which will use this missile to meet the requirements of the IAF and the Navy, as well as the Army, should the latter wish to join the programme. I am confident of the completion of this project, which perfectly illustrates the spirit of our strategic partnership as it implies the joint development of a new weapon system.
He also was hopeful of French industries supplying the reconnaissance and observation helicopters to India, apart from participating in the second phase of six conventional submarines for which Navy has already issued a Request for Information.
"We must together explore other possible areas of applying the renewed cooperation, accompanied by real transfer of technology," he added.
Pointing out to the bilateral naval exercise 'Varuna' and air force exercise 'Garuda' between India and France, Morin said the two were "major manoeuvres that enable us to develop and implement new tactics, which can be directly used, for instance, to fight piracy."
"These joint manoeuvres are also internationally recognised for their high standards and stir much interest, as reflected in the participation of the Singaporean Air Force in the 'Garuda' exercise held in France in June 2010," he noted.
PTI
Posted by Claude Arpi at 11:24 AM