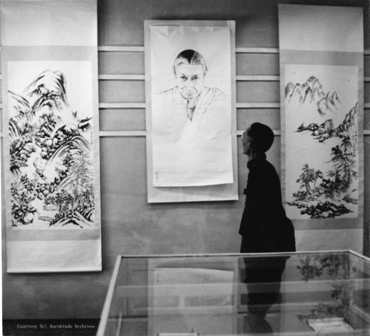 Have you heard of Xu Fancheng? Never heard of him? You are not the only one.
Those who visited the Pavilion of Puducherry at the World Exhibition in Shanghai may have come across a panel depicting Xu Fancheng’s amazing odyssey in India: ‘The key man in cultural exchanges between India and China’ as one panel depicts him.
This assertion might be true, but strangely enough, he is unknown in India; even the South Block Mandarins, always quick to find living symbols of the Chini-Hindi brotherhood, are unaware of him.
Ironically, it is a Communist publication, The China Daily (the largest English-language newspaper in the mainland) which first paid homage to the great scholar, artist and spiritual seeker.
In December 2009, The China Daily published a surprising article explaining the special place of Xu for the Chinese people who “cannot imagine that a scholar …could find [in India] a place to immerse himself in his quest for spirituality.” It noted that: “it is exactly what Xu Fancheng (1909-2000), a leading researcher with the Chinese Academy of Social Sciences did in India.”
It is worth quoting a few more lines from the Chinese newspaper: “In ancient times, Chinese scholars used to travel to India to study Buddhism and to bring back Buddhist scriptures, some of which have been well documented in history. But Xu spent a much longer time there than any of them, although he did not have to walk or ride horses and camels across deserts and snow-capped mountains to reach his dreamland”.
The Communist paper continued: “For 33 quiet and, for most part, penniless years, Xu worked as hard as the ancient pilgrims, studying and translating India's classical and modern writings. He was unaffected even by the loss of family members and the change of the national government back home. He spent most of those years in Sri Aurobindo Ashram.”
But who was really Xu Fancheng or Hu Hsu as he is still remembered in Puducherry?
Hu Hsu was born in Changsha, in the southern province of Hunan on October 26, 1909 into a well-off family. At that time, even though his family was involved in business, it was the normal practice for boys to get a classical education in literature and arts.
The discreet Xu once told one of his friends in the Ashram that Mao Zedong had been his history teacher in primary school. It is a fact that in 1917, the future Great Helmsman founded a night school in Hunan. Later Mao was later appointed assistant librarian at the University of Beijing. It is probably around that time that Xu met him this ‘very good teacher’.
Unfortunately for China, Mao’s destiny was not to remain a ‘good’ teacher.
A few years later, the young Xu came into contact with Lu Xun, one of the most prominent Chinese writers in the 1920’s and 1930’s. Lu had a large following among young intellectuals and is still considered today as the founder of modern Chinese literature. The two became friends.
Hu Hsu continued his studies at the Sun Yat-sen University in Guangdong. Interestingly the university’s motto was: "Study extensively; enquire accurately; reflect carefully; discriminate clearly; practice earnestly". During his entire life, Xu Fancheng faithfully followed this path.
He later moved to the Fudan University to study Western Literature. In 1929 with Lu Xun’s support, he obtained a scholarship to study Fine Art and Philosophy in Heidelberg, Germany where he stayed 3 years.
He came back to China in 1932 where he started to translate the works of Nietzsche into Chinese; soon becoming a Nietzsche expert.
In 1945, at the end of the WWII he decided to come to India. Flying from Kunming to Calcutta was an adventure in itself (during the war, 594 aircraft were lost, missing, or written off and 1,659 personnel killed or missing). But this was nothing for the young spiritual aspirant. 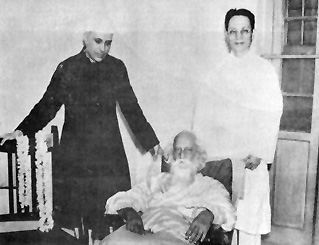 For several years, he lived in Visva-bharati in Santiniketan studying Sanskrit while teaching the History of Chinese Buddhism at Cheena Bhavana, the centre co-founded by Rabindranath Tagore and Tan Yun-shan in 1937.
It is at Tan’s initiative, let us not forget, that Jawaharlal Nehru visited China in 1939. A close friendship and mutual respect is said to have been forged between the two thereafter.
It is probably Tan who spoke about Sri Aurobindo and his Ashram to Xu Fancheng. In 1939, after having visited the Ashram and meeting the Mother, Tan had Sri Aurobindo’s darshan. He later wrote: "...As in the past China was spiritually conquered by a great Indian, so in the future too she would be conquered by another great Indian, Sri Aurobindo, the Mahayogi who, is the bringer of that light which will chase away the darkness that envelops the world today."
In 1951, Xu landed in Pondicherry. He remained there for 27 years, deeply immersed into studying, painting, teaching, translating, writing or simply being an ‘integral yogi’.
He translated into Chinese several Indian classics such as the Bhagavad Gita or the Upanishands, but also the major works of Sri Aurobindo, particularly The Life Divine. It is Xu who organized the first Chinese printing press in Pondicherry with the Mother’s support.
On October 30, 1962 (the Chinese had invaded India 10 days earlier), the Mother told one of her disciples: “I suddenly realized that the Chinese can't translate the way we do! In Chinese, each character represents an idea rather than a separate word; the basis is ideas, not words and their meanings, so translation must be a completely different kind of work for them. …But how interesting it must be [for Xu] to work with new ideas that way! The man is a genius!”
The death of Mao Zedong in September 1976 heralded a new era for China and the world. Those who had suffered the brutal repression of Mao’s policies began dreaming of a brighter and more peaceful future.
On December 18, 1978, hardly two years after the end of the Great Proletarian Cultural Revolution, a small man (in size) climbed the rostrum for the Third Plenary Session of the Eleventh Central Committee of the Communist Party of China. Deng Xiaoping was to change the face of China. 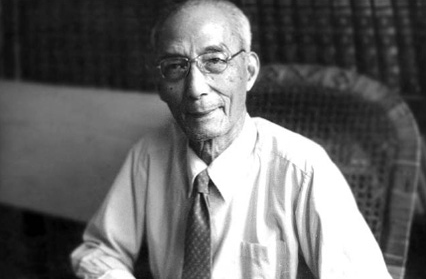 The same year, Xu decided to return to China and worked as a researcher in the Department of Religion in the Chinese Academy of Social Sciences in Beijing. He continued to work quietly until he passed away on March 6, 2000.
Can you believe that it is The China Daily which asked: “Why are an old, lonely scholar born a century ago and the stuff that used to be called ‘Oriental mysticism’ and spirituality, drawing people's attention today when most students in China and India are being taught Western rationalism?” and then adding: “When Xu was pursuing his vocation single-mindedly, Chinese youths were flocking to Western countries' embassies or consul offices to apply for student visas”.
Yang Xusheng, a professor of Sinology in the Renmin University admits: “We have come to realize that seeing some of us become morally and spiritually hollow is as much painful an experience as seeing other people inadequately nourished and sheltered. Xu's research is unique for it reminds people that in order to seek a balanced life and economy, we have to go back to the questions raised by the first thinkers of our civilizations.”
Thirty years ago, though Deng Xiaoping announced that ‘to be rich is glorious’, the masses’ lives still remain hollow; it is perhaps time for China to meditate on the life and contribution of the last Chinese pilgrim. Hu Fancheng has definitively a message to teach to China's youth.
Posted by Claude Arpi at 4:58 PM