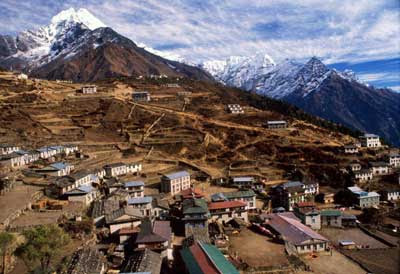 Though the journalist got it wrong, the  Khampa bases in the 1960's were in western Nepal (north of Pokhara) and not in Solukhumbu, this article shows once again that the Maoists are on the payroll of China. As we have seen in a previous posting, Beijing seems to every day strengthen  its position in the erstwhile Himalayan Kingdom.
It is god to see that the Indian Ambassador was not bullied by the Maoist tactics. Ultimately, one can only hope that the Nepalese people will reject Prachanda and his goons.

Kathmandu, Oct 6 (IANS)
Maoist supporters Wednesday tried to obstruct the Indian ambassador to Nepal, Rakesh Sood, from inaugurating a healthcare project that will benefit hundreds of school children because it was near the Tibet border, a sensitive area for China that remains wary of Tibetan uprisings from Nepal.
Nearly three dozen people, led by former Maoist minister for culture Gopal Kirati, who had earlier spearheaded the attack on Indian priests at the Pashupatinath temple in Kathmandu, waved black flags at the Phaphlu airport in northern Nepal and raised anti-India slogans when the envoy reached there to inaugurate an eye camp.
A regional association of the Maoists, the Sherpa Rastriya Mukti Morcha-Nepal, had issued a statement earlier, asking the envoy to call off his visit to Solukhumbu district in northern Nepal or face 'strong protests'.
The warning was delivered on behalf of China, with whom the Maoists have been strengthening their ties, especially after the fall of their government last year.
Northern Nepal remains a sensitive spot for Beijing that continues to be haunted by an uprising by Tibetans in the 1950s against the annexation of China.
The Khampa warriors of Tibet who resisted the invasion had guerrilla bases in northern Nepal and were trained by the CIA and supported by India.
The Morcha alleged that the Indian government had stepped up 'so-called charitable and religious projects' in northern Nepal in a bid to stoke another anti-China movement.
However, unfazed by the protests, the Indian envoy inaugurated the newly set up district branch of the Nepal-India Human Development and Friendship Association at Salleri and an eye camp by the Nepal Netra Jyoti Sangh (NNJS) at Lukla. The eye camp at the Mahendra Higher Secondary School will examine more than 800 children.
Since 2001, India has been providing assistance to NNJS for eye care programmes in Nepal through free eye camps organised as part of the India-Nepal Economic Cooperation Programme. It has treated over 75,000 people for cataract and trachoma and distributed optical devices and spectacles to over 18,000 school-going children.
Sood was given a thumping welcome by the school children, who lined up the road to welcome him. The Indian envoy was also welcomed by the local leaders of the major political parties - except the Maoists - who submitted proposals for an additional 12 projects related to education and health.
Posted by Claude Arpi at 7:34 AM