The Long Arms of the Mandarins 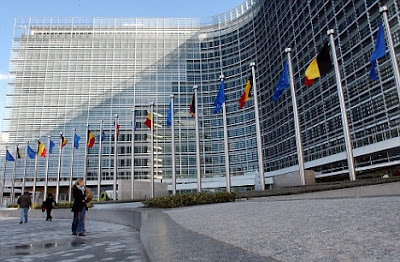 The European leaders speak big about the Human Rights (see Ms Viviane Reding in the case of the Romas' expulsion from France) but when it comes to the Middle Kingdom, they fall silent. They are aware who is powerful and who is not.
Read this article, you won't believe it, but it is the sad truth.


Chinese reporter tells story of 'EU censorship'
ANDREW RETTMAN AND ANDREW WILLIS
October 11, 2010
The EU Observer
EUOBSERVER / BRUSSELS - One of the reporters temporarily excluded from the China-EU summit last week has talked to EUobserver about his "surprise" at facing Chinese-style censorship in the bosom of the European Union.
Lixin Yang, who has full press accreditation in the EU institutions in Brussels, was first denied entry when he and three colleagues arrived at the metal detectors at the summit venue, the EU Council's Justus Lipsius building, at 2pm local time last Wednesday (6 October). He works for the government-critical media The Epoch Times and New Tang Dynasty Television, which have links to the repressed Falun Gong movement.
He returned at 4pm and was blocked again. Fellow reporters from Associated Press and Reuters interjected on his behalf. A senior Council security officer arrived and Mr Yang was allowed to proceed. The officer refused to say who had ordered him to be kept out.
An hour and a half later the Council announced that the post-summit press conference was cancelled.
"I asked the Council press person why I was being blocked and he told me it was for security reasons," Mr Lixin recalled. "My colleagues had similar problems and one of them took camera footage of the Council's press team talking to Chinese officials. It was very clear that the Council staff had been given a blacklist of names."
"The Chinese impose media censorship everywhere they go. But what surprised me was that it was in the Council, an EU building, and that the Council staff wouldn't admit it. It's censorship imposed from authoritarian regimes on the EU. What does this mean for the EU-China 'strategic' relationship?"
The Brussels-based International Press Association (API) later reported that Council officials had initially excluded the reporters because China said they posed a security threat. It added that China cancelled the press conference when it learned that they had been let through. API criticised EU leaders Herman Van Rompuy and Jose Manuel Barroso for also canceling their press appearance in deference to the Chinese side.
The episode caused discomfort for European Commission officials at their regular press briefing on Friday.
A spokesman initially read out a statement that the China-EU press event was cancelled due to "scheduling problems." Following a series of questions by API, commission officials then asked the cameras to be switched off and, in an off-the-record session, corroborated API's account and admitted that the whole incident was "embarrassing" for the EU.
EU chiefs the same day had to handle another tricky development when the Norwegian Nobel Committee awarded its 2010 peace prize to imprisoned Chinese dissident Liu Xiaobo.
News of the Nobel award was heavily censored inside China. Chinese authorities reportedly blocked links to foreign news websites, deleted Mr Liu's name from Twitter feeds and blanked out CNN and BBC World bulletins on TV.
The strongest statement of EU support came from foreign relations chief Catherine Ashton. Ms Ashton did not explicitly call for Mr Liu's release but said: "I hope he will be able to receive his prize in person." Mr Barroso said only that the Nobel decision "is a strong message of support to all those around the world who ... are struggling for freedom and human rights." Mr Van Rompuy said nothing.
China is the EU's second largest trading partner after the US and bought €82 billion worth of EU products last year.
Chinese premier Wen Jiabao in a show of economic strength last week visited Greece, Italy and Turkey as well as Belgium. He promised to buy Greek government bonds as soon as they came up for sale, signed €2.25 billion of new investments in the Italian energy and telecommunications sectors and promised to take part in a massive railway project in Turkey.
Posted by Claude Arpi at 7:44 AM

Dear Claude,
As most Western countries are near bankruptcy, Chinese greed is going to impose all kind of restrictions on people, ideas and lifestyle.
We begin to see the impact in our daily Western lives of having been buying cheap products from China for the last 20 years: less jobs, less public services, less democracy, less freedom. The future is bleak is the West keep going that way. The only hope will be the implosion of China from inside.