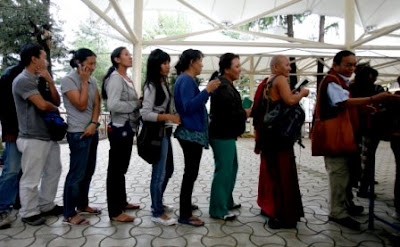 We knew that China did not like democracy. For Beijing, it is synonymous of the Party loosing its control over the Middle Kingdom.
But now Beijing impose its way of thinking on its neighbours by asking them to steal ballots for what should have been considered as an internal democratic exercise of the Tibetan Diaspora.
Sadly, Nepal has become a Chinese colony. Today, Kathmandu receives yuans from  Beijing and obeys to its orders. It is an ominous sign for Nepal's southern neighbour (the largest democracy in the world!).


Nepal police disrupt Tibetan elections in Kathmandu Phayul
Phayul.com
October 03, 2010
By Phurbu Thinley
Dharamsala, October 3: Nepal police in Kathmandu on Sunday disrupted Tibetan preliminary polls by confiscating ballot boxes already filled with thousands of ballots just an hour before the polls were due to be closed.
Several armed police arrived at different polling booths located in different parts of Kathmandu valley and confiscated ballot boxes filled with thousands of votes, a Tibetan voter from Boudha, a landmark Tibetan area in Kathmandu, told Phayul.
Hundreds of thousands of Tibetan exiles across the world on Sunday went to polls to cast their ballots to nominate candidates for the post of Prime Minister of the Tibet’s government in exile and members of the Tibetan Parliament-in-exile for the next year’s general elections.
The voting is to take place simultaneously from 9.am to 5.pm local time around the world.
Around 50 or 60 armed policemen arrived around 4.pm and confiscated all the ballot boxes and put them into police van, the Tibetan voter who identified himself as Wangdu, said.
According to Mr Tsering Dhondup, a local election officer in charge of Boudha-Jorpati area, police took away ballot boxes from at least three polling booths located in areas of Swayambu, Boudha and the main Kathmandu city circle.
“We have been told that the last-minute order was issued directly from the Home Ministry. Otherwise we have duly informed the concerned Nepali authorities well in advance about our poll schedules and at that time we have only been told to restrict our polls within the limit of the approved venues. Other than that there were no other objections from their side initially,” Dhondup added.
According to Dhondup, although no arrests were made, in some cases police even resorted to mild lathi-charge before forcefully taking away the ballot boxes.
He said efforts are underway to talk to concerned higher authorities about the matter.
“We don’t know yet where they took away the ballot boxes and everyone here is looking confused and helpless. Some of the Tibetans at the election scene even decided to stage protests, but the Tibetan elections officials stopped them from doing so,” Wangdu said.
Nepal government has lately vowed to check "anti-China activities" to strengthen friendly ties with China, a major donor for the impoverished country.
The forced disruption of Tibetan polls on Sunday follows a visit by 21-member high-level Chinese delegation led by He Yong, Secretary of the 17th Central Committee of the Communist Party of China, to Nepal last month.
During the visit, the Chinese delegation reportedly expressed satisfaction over “Nepal’s ‘one China’ policy and the alertness adopted by the country over the Tibet issue”.
Prior to the Chinese delegation’s visit, the governments of the two countries had even agreed to set up a joint mechanism to help share intelligence on "anti-China activities" in Nepal.
Nepal, which is home to some 20,000 Tibetans, has accommodated Tibetan exiles for decades, but has come under increasing pressure from China to crack down on the political protests.
Under Beijing's influence and lack of stable government in the impoverished nation, rights groups say Tibetans refugees in Nepal are increasingly vulnerable and at risk of arrest and repatriation.
Posted by Claude Arpi at 7:28 AM