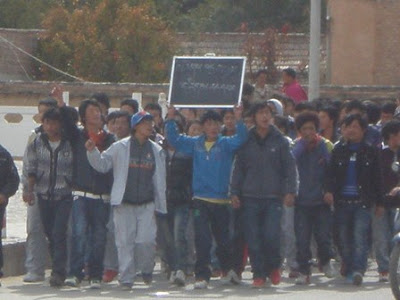 Two years after the unrest of March/April 2008, the Tibetans of Amdo (Northeastern Tibet) are again in the streets. This time, it is the young students who demand a proper curriculum in Tibetan language.
These few photos are impressive.
By the way, it needs more courage to demonstrate in Rebkong or anywhere in Tibet than in the streets of Paris.
This reminds me of a recent interview with the Dalai Lama. He spoke about the problem of curriculum.
"More than 10 years ago, when Chen Kuiyuan was Party Secretary in Tibet [1992-200] , at a Party meeting, he mentioned that the ultimate threat to China (its separation from Tibet) is the Buddhist faith of the Tibetans.
Two weeks ago [interview took place in April 2010], I was in Switzerland, I met some Tibetans. They know very well about the Tibetan University in Lhasa; they told me that the level of Tibetan studies before Chen Kuiyuan was quite good. After Chen became Party Secretary, it changed. The Tibetan texts were banned. Only the Chinese curriculum was allowed and translated into Tibetan; the courses were [conducted] according to this curriculum.
Chen Kuiyuan saw the unique Tibetan culture heritage as a threat to separate Tibet from China. So, he systematically eliminated Tibetan [culture] from Tibet. This is one thing.
Then, last year, I met a Tibetan who has settled in Australia and visits Tibet from time to time and brings money to build schools in his native place. Last year, after he returned, he told me that one of his friends who works in the education field told him the present Party Secretary [Zhang Qingli] convened a meeting of Han officials only.
The Central government had asked Zhang to make some suggestions. In order to make these suggestions, he convened this meeting with Han officials only. For the education, they made the [following] suggestions to the Central Government: Chinese language should be the first language; it should be taught from Kindergarten. Then, all schools should emphasize about learning the importance of China and all monasteries should become like in the mainland, just museums with very few monks as caretakers.
Zang Qingli made these three suggestions.
The Chinese faced so many problems from the monasteries in March 2008. This meeting was held in 2009 to suggest a new education policy with these three points. If it is true or not, I have no way to cross-check [my information].
When someone asked the Dalai Lama if the term ‘cultural genocide’ used by him was not too strong, he explained that when he mentioned about 'cultural genocide': “I did not speak of strict ‘cultural genocide’, it was ‘conditional’, I said ‘a sort of cultural genocide’.
Two things: one, as mentioned earlier, officially, there is a lot of restrictions about Tibetan studies. When Chen Kuiyuan was there, whatever had a religious meaning was removed [from the curriculum]. Then when Jiang Zemin came, new restrictions [were put in place]. Before Party officials could have [in their house] an altar with some Buddha statues; they usually had an excuse like, “my old mother likes this statues”; although they are supposed to be genuine Communists, non-believers. When Jiang Zemin became Chairman, it was not possible anymore. In the meantime, some very high Chinese Party officials, including from the PLA had my picture on their mobile, the Demon’s picture! [laughing]”.
As long as the hardliners continue to rule China, the Tibetan issue will never be solved. 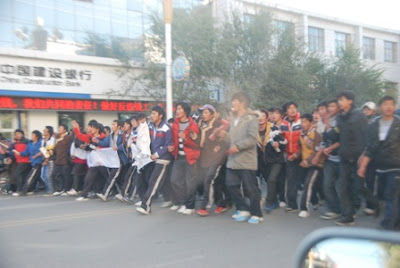 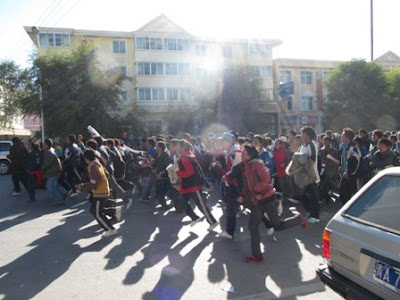 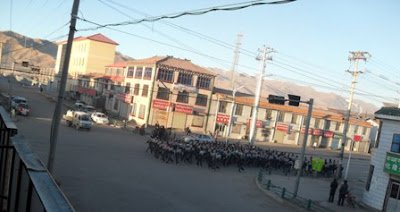 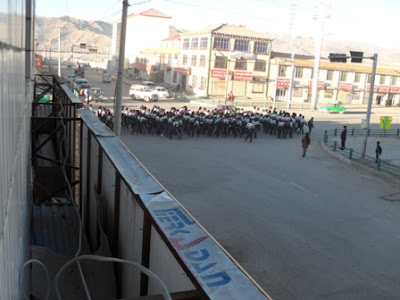 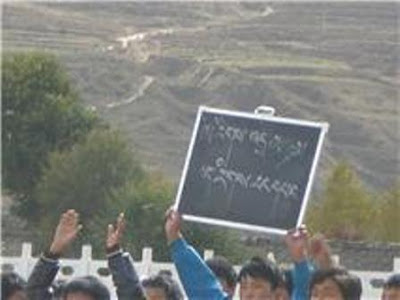 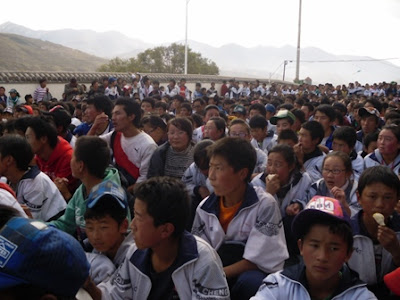 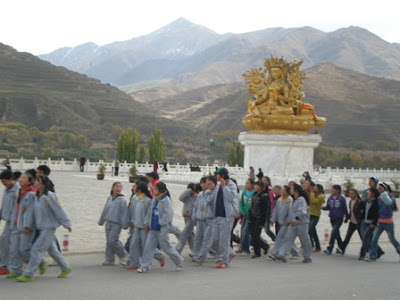 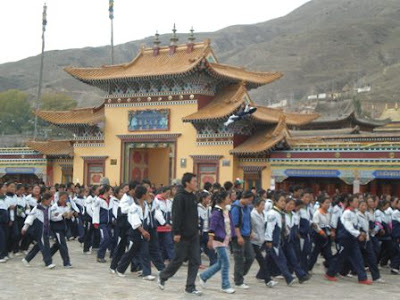 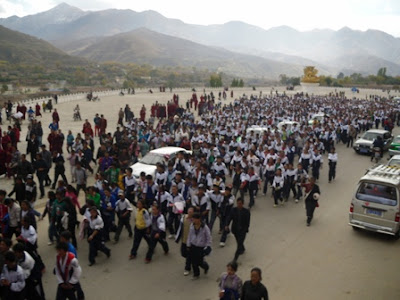 Following large protests, Chinese authorities dispatch security personnel to Tibetan areas.
HONG KONG—Chinese authorities in the remote western province of Qinghai dispatched large numbers of security personnel to Tibetan areas following large-scale student protests over education policies this week.
Local sources said thousands of Tibetan high school and college students took part in the demonstrations on Monday and Tuesday in Tsolho (in Chinese, Hainan) and Rebkong (in Chinese, Tongren) amid fears they will be forced to adopt a Chinese-language-only curriculum.
An official who answered the phone at the Rebkong county education department said there were no demonstrations on Thursday.
"Things are calm now," she said, but declined to comment further. "You should ask my boss these questions," she said.
A monk at the Longwu temple who took part in the demonstrations said there were dozens of army vehicles and personnel still on the streets Wednesday, according to exiled Tibetan sources.
"There are large numbers of them, but we can't be sure of the exact number," said Dzoege, a researcher at the International Campaign for Tibet. "We only know that there were between 20 and 30 army trucks."
The protest began on Tuesday, sparked by students from the Tongren County No.1 Middle School. They shouted slogans such as "Racial equality! Free education!" as they marched.

Teachers protest monk participation
The monk said that when he and others from the Longwu monastery joined the march, some of the teachers at the scene objected, saying the issue was an educational one, not a political one.
An official who answered the phone at the Rebkong country education department said that all the top-level officials were out dealing with the incident.
Authorities on Wednesday moved to calm tensions as the protests spread.
A local governor addressed students and assured them that the Tibetan language would remain in the school curriculum even though an official document said the Chinese language would be the main language of instruction.
The education department official said the authorities had not backtracked on the plan to use Chinese in schools.
"No, we haven't [changed our language policy in response to the protest]," she said.
"Classes are still running normally," she said, adding that the high school students who protested were "unlikely" to be punished for taking part.
Calls to the Rebkong county police department went unanswered during office hours on Wednesday.

'Kicking up a fuss'
An employee who answered the phone at the Telecommunications Guesthouse in Rebkong's county seat said the march was not as large as 1,000 students.
Estimates of protest size given by Tibetan sources ranged from as low as 1,000 to as high as 5,000-8,000.
"There weren't very many people. They were all from a single school," she said. "Before, Tibetan was the main medium of instruction, and now it will only be an available subject, and Chinese will be the main language of instruction."

"That's why they are kicking up a fuss."
A local resident surnamed Lan said Chinese had been the main language of instruction in all the schools he had attended in the region.
"There is a school here which specializes in Chinese-medium teaching, and one which specializes in Tibetan-language instruction," Lan said.
"You can be taught in Tibetan or Chinese from year one, as if it's your native tongue."
"A lot of the Tibetans here are herders. Of course they can't understand Chinese," Lan added.
U.S.-based Chinese political analyst Wang Juntao said a number of misunderstandings had occurred between Tibetans and Han Chinese during the Tibetan unrest of 2008.
"We all know that the language you use to teach people in a given country or region is a clear sign of ethnic identity," Wang said.
"If all the teaching gets done in Mandarin, with Tibetan relegated to the status of special subject, then that's probably going a bit far," he said.

China "otherizing" ethnic groups
Dawa Tsering, spokesman for the Tibetan government-in-exile based in northern India, said the Chinese government appeared to be in the process of "otherizing" different ethnic groups in China.
"There has been a long-running dissatisfaction of this kind in Tibet," he said. "Now, some Tibetan students are standing up ... because previously they were teaching dialectical materialism and Marxism ... but they were doing it in Tibetan."
"The Chinese government can't tolerate this," he said. "There is a direct connection between [this protest] and cultural and religious freedoms."
The Dalai Lama, who fled Tibet in 1959 after a failed uprising against Chinese rule, has accused Beijing of perpetrating "cultural genocide" in Tibet.
Beijing has run a high-profile "patriotic education" campaign among Tibetans since unrest spread across Tibetan regions from Lhasa in March 2008, requiring local people to denounce the Dalai Lama, whom the government rejects as a "splittist."
Original reporting in Cantonese by Bi Zimo, and in Mandarin by Tang Qiwei and Qiao Long. Translated and written in English by Luisetta Mudie.
Posted by Claude Arpi at 11:36 AM