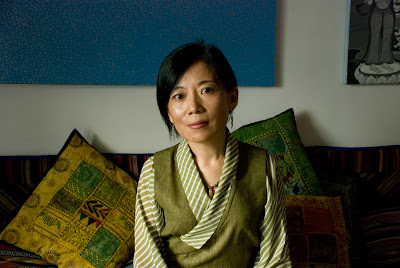 Tsering Woeser is a courageous person. Despite the tight security in China, she never misses a chance to inform the readers of her blog of the situation inside Tibet.
Woeser is one of the signatories of the Charter 08 drafted by the Nobel Peace Prize Laureate Lui Xiaobo.
Her Chinese husband, Wang Lixiong has also written extensively on Tibet. He recently published a Road map of Tibetan Independence.  He says: "This roadmap derives from the watershed. I had not taken the possibility of Tibetan independence into serious consideration before the incident in Tibet in 2008. It serves as the watershed that compels me to realize that Tibetan independence, for a long time being a fantasy, has turned into an emerging issue and reached the eyesight of the public. This change is brought by none other than the 'anti-secession' institutions in China’s bureaucratic system."
"The Party ideology sees China, during the mid 19th to mid 20th Century, as a victim of Western imperialism. The Chinese consequently have remembered the humiliations, but have rarely considered China itself as an imperial power."
One can only admire people like Woeser or Wang. They bring hope that tomorrow's China will be different and more open.
Wang Lixiong who is apparently more free to move around than Woeser recently twitted with the Dalai Lama.

Beijing-based RFA Contributor Wins Women’s ‘Courage’ Award
But Chinese Authorities Bar Woeser from Accepting Honor in Person
Radio Free Asia
WASHINGTON, DC
Today, Radio Free Asia contributor and freelance Tibetan blogger Tsering Woeser was honored with the 2010 Courage in Journalism Award by the International Women’s Media Foundation at a ceremony in New York. However, Woeser, who is based in Beijing, has long been denied a passport from the Chinese government, and could not attend the ceremony held in New York’s Waldorf-Astoria Hotel to accept the award in person.
“Courage is the defining trait in Tsering Woeser’s life and work,” said Dan Southerland, Radio Free Asia’s Vice President and Executive Editor, who attended the ceremony. “If only she were here in person to receive this distinguished award and know firsthand the recognition and respect she commands among her journalistic peers.”
Undeterred by orders and threats from official quarters, living under constant police surveillance, and subject to repeated attacks on her blogs and e-mail accounts, Woeser has persevered in reporting human rights abuses in the Tibetan region. Woeser continues to publish commentary on Radio Free Asia’s website and break stories about crackdowns in Tibet on her Chinese-language blog, Invisible Tibet. Because Woeser is a banned writer in China, her website is hosted abroad.
In April 2009, The New York Times cited Woeser’s blog as one of the few reliable news outlets for those able to circumvent China’s Great Firewall. Unfortunately for Woeser, this recognition also means living with risk. Sources and friends with whom she speaks are subject to detention and interrogation.
Woeser originally was a reporter and eventually became an editor for a government-controlled Tibetan literary journal.  After the publication of her best-selling book Notes on Tibet, which was banned in late 2003, Woeser was told by authorities to change her point of view in order to keep her job. She refused. Woeser then moved to Beijing and began blogging.  In a 2006 interview with Radio Free Asia, Woeser said she would never stop writing.
She said, “While I was working in an office in Lhasa, I was paid well.  But I never felt free, and it bothered me ... When I was fired from the job, the incident led me to the freedom to express myself in writing.”
Posted by Claude Arpi at 7:21 AM