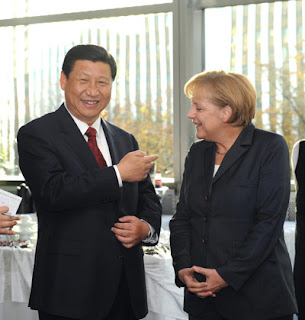 
He has forgotten his boss' name, but reads Old Jiang's books.


Hu ignored in Vice-President’s German visit?
Tibetan Review
October 16, 2009
China’s Vice-President Xi Jinping departed from a long-standing Chinese diplomatic protocol during his meeting Oct 12 with German Chancellor Angela Merkel in Berlin by failing to begin by conveying to his hosts the greetings of President Hu Jintao, noted prominent China specialist Willy Lam, writing in AsiaSentinel.com Oct 13.  Xi, the apparent front runner to succeed President Hu, it may be recalled, failed to make it to the Chinese Communist Party's Central Military Commission at the Sep’09 plenary session of the party Central Committee.
Willy Lam felt that Xi thereby apparently blamed Hu for not inducting him into the policy-setting military commission, which has been headed by the president since 2004.
Xi, 56, was, in fact, reported to have departed from the protocol for a senior Chinese cadre on overseas tour throughout his ongoing trip to five European countries, even hardly mentioning Hu.
And during the meeting with Merkel, it was the 83-year-old former President Jiang Zemin who dominated the exchanges. It was reported that before their official discussion began, Xi handed to Merkel the English editions of two books -- on energy and on information technology — written by Jiang. Xi then, as per a Xinhua report, "passed along Comrade Jiang Zemin's greetings and good wishes" to the German leader. Merkel reciprocated by asking Xi to send her greetings to Jiang.
There was no reference to Hu throughout the two leaders' tete-a-tete. As the highest-ranked Fifth-Generation politician in the Politburo Standing Committee, Xi is slated to succeed Hu as party general secretary at the 18th CCP Congress in Oct 2012 – and as state president a few months later. Hu’s favoured candidate to succeed him is said to be Vice-Premier Li Keqiang, who, for now, is expected to take over the premiership from Wen Jiabao in early 2013.
Willy Lam sees Xi's apparent decision to openly side with Jiang -- and his failure to appear deferential to Hu — as a good indication that factional rivalry and jockeying for position has begun some three years before the 18th Party Congress when the fifth generation of Chinese leaders are set to assumed office.