Where were the People? 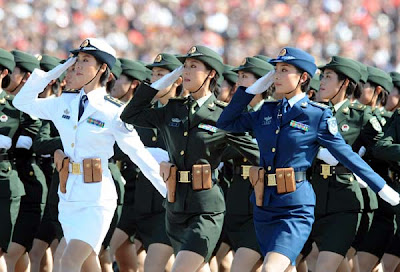 The parade was great.
The New York Times agrees: “The celebration of the founding of the People’s Republic of China was immense, powerful and flawless, down to the crystalline skies that, just a day earlier, had been laden with smog.”
Sixty years earlier, Dr Li Zhisui, Mao Zedong’s private physician was on the rostrum of Tiananmen Square to attend the ceremonies of the foundation of the People’s Republic of China. He later wrote of “the crisp, clear, and chilly day that makes autumn in Beijing the most magnificent season”. The organizers of the 60th anniversary couldn’t afford not to have a ‘crystalline sky’ in 2009.
But let us come back to 1949. The Great Helmsman appeared on the stage, Dr Li recalled: “Mao was a truly magnetic force. Mao's voice was soft, almost lilting, and the effect of his speech was riveting. ‘The Chinese people have stood up’, he proclaimed, and the crowd went wild, thundering in applause, shouting over and over, ‘Long Live the People's Republic of China!’. I was so full of joy my heart nearly burst out of my throat, and tears welled up in my eyes. I was so proud of China, so full of hope, so happy.”
Though a foreign correspondent described the celebrations as ‘slightly kitschy and indisputably retro’, Xinhua News Agency reported: ‘a total of 52 types of new weapon systems, all Chinese made, including new generation tanks, missiles and warplanes were displayed. Ninety percent of the weapons were paraded for the first time”.
The Second Artillery Force stole the show with a display of five types of missiles, ‘China's core strategic deterrent’. Xinhua affirmed that “the gigantic weapons in camouflage colors rolled by on long-bed trucks, triggering cheers from spectators.” Experts already knew that that the dreaded DF21 medium range ballistic missiles could be well camouflaged and launched from trains (from the Qinghai-Tibet train, for example), but to see them all at the same time was awesome.
It was followed by 151 warplanes which flew over Tiananmen Square, including China's most advanced J-10 and J-11 fighter jets, airborne early warning and control aircraft (AEW&C), bombers and aerial tankers.
Though Dennis J. Blasko in the last issue of the China Brief of the Jamestown Foundation had warned: “No judgment about Chinese military capabilities can be rendered simply by watching this parade. And more importantly, based on the weapons on display no judgment can be rendered as to the Chinese intention behind the deployment of these weapons,” but one can guess what the probable targets are. 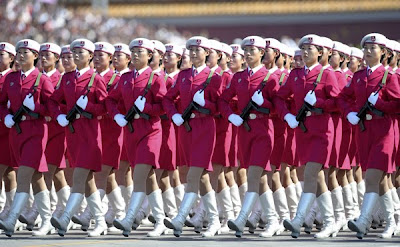 If there was Glamour Award, it would have gone to the ladies (said to be a female militia unit) clad in red miniskirts with white jackboots carrying the latest submachine guns (probably making our antediluvian-equipped AK47 NSG, jealous).
The kitsch part of the grandiose parade was President Hu Jintao reviewing the troops in an open roof 12-cylinder Red Flag limousine dating from Mao’s times. For the occasion Hu was dressed in a high-collar Mao-style jacket (while other members of the Standing Committee of the Politburo and former President Jiang Zemin wore ordinary suits and ties). During the review, the President stood stiffly in front of four microphones fixed on the limousine, shouting “Greetings, comrades!” with the troops answering “Serve the people!”
In his speech, Hu proclaimed that the Chinese people “cannot be prouder of the development and progress of our great motherland,” however observers noted the main absentees at the celebrations, the People of China. Apart from a few thousands apparatchiks, some foreign diplomats and journalists and 100,000 extras, where were the Chinese People?
They were told to remain inside their homes and not emerge. To make sure that the Party’s instructions were followed to the letter, some 800,000 ‘volunteers’ had been engaged. Such tight security had not been seen in 60 years (it is said to have been even tighter than during the Olympics). Does it mean that the Party is scared of its own people? 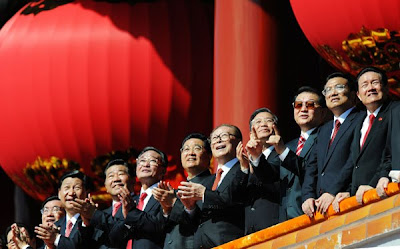 What else to conclude? Sixty years after its foundation, the ‘Republic’ (from the latin res publica or ‘public matter’) is not for the ‘public’, but for a Party. China is still not a ‘republic’.
This is the tragedy of modern China.
This is visible at all levels of the State, even at the highest level such as the Standing Committee of the Politburo.
It is probably the most serious failure of the Middle Kingdom which has been unable to introduce a modern system of governance. Though the word ‘people’s’ is recurrent in all State organs, the nation is run by a single Party since 1949. Ordinary people have no say in State affairs.
National People’s Congress Chairman Wu Bangguo recently declared that China will ‘never go down the devious path’ of ‘Western institutions’. But whether Beijing agrees to it or not, human rights, basic personal laws or universal suffrage are today values accepted by all non-rogue nations.
Supreme opacity adds to the undependability of the system; glasnost (transparency) has never been a Chinese forte.
This issue is so serious that China’s stability could be endangered. It has recently been reported that Xi Jinping, the Chinese Vice-President was not elevated (as expected) to the all-powerful Central Military Commission. Nobody knows what happened; it can only be guessed that Hu Jintao does not see eye to eye with Xi.
The Chinese heir-apparent is the son of Xi Zhongxun, one of the senior-most leaders of the First Generation of the CCP. In 1962, he fell out of favour, accused of disloyalty to Chairman Mao. Is Old Xi’s son following the same road?
Interestingly, some of the opacity was lifted by Zhao Ziyang, the former General Secretary of the CCP. In his secretly recorded memoirs, he explained that he once wrote to Deng Xiaoping, the paramount leader about ‘perfecting the system of the central leadership’ and ‘how to really establish democratic centralism within the Central Committee, especially within the Politburo and its Standing Committee’; in other words, to have a tested and accepted system to succession.
Zhao told Deng: “Maintaining the stability of the fundamental laws of the nation is certainly one aspect; however …I believe that fundamentally and most importantly, we must tackle the system of the Party leadership.” He proposed “to establish a much-needed system of leadership for our Party and then to personally inspect and seek compliance so as to make it a custom and culture that will not shift according to the changing of individuals, so it will pass on through the generations.”
We know what happened to Zhao during the Tiananmen incidents in 1989. He was unceremoniously removed and kept under house surveillance for the rest of his life; he had tried to listen to the students’ grievances.
Today, China has become a Power to reckon with. Napoleon Bonaparte, the French Emperor is supposed to have pronounced the famous sentence: “When China awakes, the world will tremble”
Certain aspects of the Middle Kingdom’s rise to a Superpower are indeed scary. We see it everyday in the Indian press.
It was been exacerbated by Beijing’s new nationalism fueled by the economic rise of China and the success of the Beijing Olympics Games.
But before wanting to teach others lessons, it is perhaps time for the ‘people’s republic’ to look inside and integrate its ‘people’ into its system of governance and succession.