Chaoistan and the Italian Strategy 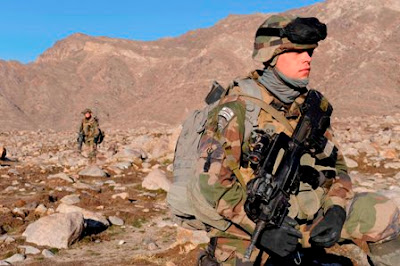 While the Indian media is busy with the intrusions and other Chinese aggressive postures on northern front and the utter mess in Pakistan in the west, interesting things are happening in Afghanistan.
It was first reported that General Stanley McChrystal, the new NATO top Commander had argued with the Obama’s Administration that without more troops the United States could lose the war against the Talibans. “Resources will not win this war, but under-resourcing could lose it," wrote McChrystal in a report addressed to his boss in the White House and reproduced by the Washington Post.
He explained: “The stakes in Afghanistan are high. …President Obama’s strategy to disrupt, dismantle and eventually defeat al Qaeda and prevent their return to Afghanistan have laid out a clear path of what we must do. Stability in Afghanistan is an imperative; if the Afghan government falls to the Taliban – or has insufficient capacity to counter transnational terrorists – Afghanistan could again become a base for terrorism, with obvious implications for regional stability.”
Unfortunately in the meantime, the tenant in the White House was awarded the Nobel Peace Prize putting him in a terrible dilemma. Considering that he got the coveted Prize on his declarations of intention, President Obama is now in two-minds about sending more US jawans to Afghanistan.
But there is more interesting.
Let us go back a year ago. While France moaned about the too few Gold Medals earned by the nation in the Beijing Olympics, 10 of her soldiers were killed on a reconnaissance mission in Afghanistan after a fierce battle with the Talibans. The French commandos were part of the contingent of 70,000 serving under a 40-nation NATO coalition called the International Security Assistance Forces. They were ambushed in a mountainous region of Surobi about 50 kilometers east of Kabul. It was the deadliest attack on international troops in Afghanistan since in June 2005 when 16 American soldiers were killed in their helicopter which was shot down by a rocket-propelled grenade.
Some the surviving soldiers complained that once they had fallen into the trap, they had to wait for four hours before NATO planes arrived. They then missed their target and hit the French troops. It was neither confirmed nor denied, though General Michel Stollsteiner, the NATO Commander of Kabul Region commented that the French troops had been ‘overconfident’. France went into a deep shock.
The public began to grumble louder: President Sarkozy's decision to increase the French contingent in Afghanistan by 700 troops (to 3,300) was widely criticized “just because the US had asked its NATO allies to share burden in Afghanistan”.
Le Figaro echoed the general feeling: "If the aims are just, are the tactics being used to achieve them correct?"
After seeing the ten coffins covered with the tricolor flag, the public opinion took a stronger view. The common question was: which price are we paying for what?
The French President decided however to send a 700 reinforcement force. In a typical Sarkozy style, he said: “It is here that the peace in the world is at stake and therefore it is here that war [is waged] against terrorism, poverty, and also for Human Rights and for the rights of the women.” Many were not convinced.
Fourteen months later, The Times in London broke a sensational piece of news: “Italians bribed the Taliban all over Afghanistan”. A Taliban commander and two senior Afghan officials would have confirmed to The Times reporter that “Italian forces paid protection money to prevent attacks on their troops”.

It was immediately denied by the Office of the flamboyant Italian Prime Minister Silvio Berlusconi: “The Berlusconi Government has never authorised nor has it allowed any form of payment toward members of the Taliban insurgency.” However from May 2006 to May 2008, it was Romano Prodi who was heading the government and the present government refutation is not a denial that the Italians have not done it.
Mohammed Ishmayel, a Taliban commander explained to The Times that “a deal was struck last year so that Italian forces in the Sarobi area, east of Kabul, were not attacked by local insurgents.”
The French forces who took over the area from Italian troops were apparently unaware of the ‘deal’ with the local commanders resulting in the death of the French soldiers.
Ishmayel said that it had been agreed that “neither side should attack one another. That is why we were informed at that time, that we should not attack the NATO troops.” When the French troops attacked the Talibans, the latter presumed that the deal had been broken.
The French newspaper Le Monde affirmed that sources close to the NATO see it differently: “it would simplistic to explain such an attack only by the lack of proper information [about the ‘protection money’?]. It would be more correct to point to the difference of strategy between the Italians and the French”.
Italian Defence Minister Ignazio La Russa acquiesced: “the behaviour of our military, which is very different compared to that of other contingents”; their orders is to support the local population and help for the reconstruction and development of Afghanistan; something France has only begun after the death of its soldiers.
A usually well informed French blog, run by a journalist of the newspaper Liberation said that though the bribing information could not be confirm or deny, “several times we heard from serious military sources, accusations against the behavour of the Italian troops in Surobi district. …The accusations were of two types: one, absence of patrols in certain areas like Uzbine [where the French troops were killed] and a wide tolerance for the culture of opium”. The blogger however admitted that he never heard earlier about downright payments to the Talibans.
In a speech recently delivered in London, General McChrystal would have said that people constantly suggest to him schemes ‘for fixing Afghanistan’s problems’. One of these ‘recommendations’ advocated a plan called 'Chaosistan.' The idea was to let Afghanistan become a “Somalia-like haven of chaos that we simply manage from outside”.
Some U.S. intelligence officials believed that the reference originates in a secretly published CIA analysis titled ‘Chaosistan’.
With or without the CIA covert schemes, it is clear that Afghanistan has become Chaosistan. The last presidential election is yet another proof of it. But western governments continue to put a brave face. During a recent visit to Kabul, French Foreign Minister Bernard Kouchner declared: “the present period is crucial in the history of this nation… these elections will mark a new step in the consolidation of the rule of law, the reconstruction of nation and the foundation of stable institutions”. Serious observers don’t believe that this will happen soon, though Kouchner announced that Karzai and his opponent Abullah Abdullah have agreed to work together. Whoever is aware of the past history of Afghanistan knows the impermanence of this type of alliance.
Though the NATO forces are technologically far superior to the Talibans, they will always be in a state of inferiority in terms of ground knowledge and intelligence gathering.
In these conditions, there is no way to win a ‘war against terrorism’, especially under the aegis of puppet (or divided) government, while the terrorists continue to roam free in the neighbouring country.
In an editorial, Le Monde summed up what many people think: “The Afghan electoral imbroglio send us back to the contradictions of the international coalition and the ambiguity of objectives which mix counter-insurrection and tentative nation building.”
Moliere, the greatest French playwriter of all times once put in the mouth of one of his characters, a phrase that the persona keeps repeating: “What the hell are we doing on this boat?”
Many in France believe that this could apply to Afghanistan.