Dam or no Dam 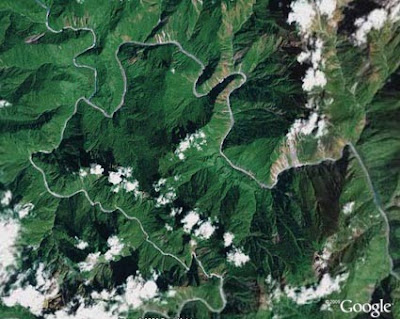 Utter confusion seems to prevail.
How can the Prime Minister say that there will be no dam on the Yarlung-Tsanpo?
In any case, dam or dams do not necessarily mean 'diversion'.
The media seems to also confuse the resettlement of 3 lakhs of people in Hubei and Henan provinces of China (probably linked to the Central Diversion) with the diversion of the Brahmaputra.

Stop China dam, urges Arunachal CM
Headlines Today
New Delhi,  October 19, 2009
Arunachal Pradesh Chief Minister Dorjee Khandu met Prime Minister Manmohan Singh on Monday and raised concerns about the dam coming up on the Chinese side of the Brahmaputra.
Khandu told Singh that steps should be taken to get China to stop construction of the dam.
"The PM assured me that the matter would be taken up with China," Khandu said after the meeting.
Khandu's meeting with Singh came amid reports that China was planning to relocate over 3 lakh people who might be displaced by the dam. The report also raised concerns about diversion of water from the Brahmaputra. 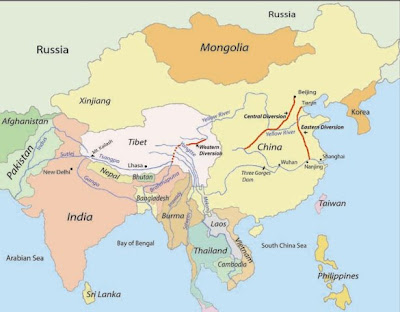 No Chinese dam over Brahmaputra: PM assures Arunachal
Indo-Asian News Service
Guwahati, October 20, 2009
China has formally clarified to India that it is not building a dam over the Brahmaputra river on its side, Arunachal Pradesh Chief Minister Dorjee Khandu said on Tuesday.
Prime Minister Manmohan Singh met a group of legislators and MPs from the northeastern state led by Dorjee Khandu in New Delhi on Monday.
"The Prime Minister assured us that there was no dam being constructed over the Brahmaputra by China. In fact, Beijing had formally communicated this to the Indian government," Khandu told IANS on telephone from New Delhi.
The controversy follows media reports that Beijing was constructing a $167 million hydropower plant in Zangmu, 140 km southeast of Tibet's capital Lhasa, besides diverting water to its parched northwest and northeast territories, which includes the Gobi desert.
The 2,906-km long Brahmaputra is one of Asia's largest rivers that traverses its first stretch of 1,625 km in Tibet, the next 918 km in India and the remaining 363 km through Bangladesh before converging into the Bay of Bengal.
"We are happy with the prime minister's assurance," the chief minister said.
There were fears expressed by both the Assam and Arunachal Pradesh governments that diversion of water from the Brahmaputra would lead to a natural disaster in the region.
Assam Chief Minister Tarun Gogoi is meeting Manmohan Singh Tuesday night to express fears about the reported dam construction.
Media reports of Chinese incursions into India and Beijing's opposition to the Indian prime minister's visit to Arunachal Pradesh -- a region Beijing claims -- also figured in Monday's meeting.