Official Spokesperson about a Chinese dam on Brahmaputra river 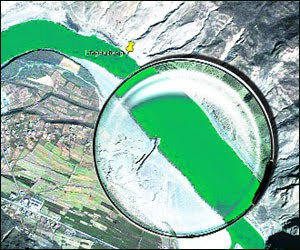 It is good that the Government takes seriously the dams and other constructions on the Yarlung-Tsangpo in Tibet.
Ultimately, the only solution seems to have a river-water Treaty signed between India and China (and Bangladesh), like the one between India and Pakistan inked in the early sixties. Why can't a similar accord be arrived between the three nations for the use of the Brahmaputra/Yarlung Tsangpo waters, in order to assure a decent life for all in the region?


New Delhi
October 15, 2009
In response to a question about a report in a leading Indian newspaper about construction of a dam on Brahmaputra by China, the Official Spokesperson said:
The Brahmaputra flows for about 1625 kilometres inside the Tibet Autonomous Region of the People's Republic of China and for a further 918 kilometres inside India.
Keeping in mind that the river is an economic resource for the development of the local communities in the two countries, India and China agreed in November 2006 to establish an Expert Level Mechanism to discuss trans-border river issues in an institutional way. Three meetings have been held so far.
During these meetings, the Indian side has taken up with the Chinese side, reports about the construction of a large scale dam or diversion project in the Brahmaputra. The Indian side has conveyed that such a project may have significant impact on the socio-economic condition of people living downstream. The Indian side has also expressed the hope that the Chinese side will not undertake such a large scale project or divert the waters of the Brahmaputra.
The Chinese side has categorically denied that there is a plan to build any such large scale diversion project on the Brahmaputra river.
We are looking into the said newspaper report to ascertain whether there are recent developments that suggest any change in the position conveyed to us by the Government of China.