The Federation of American Scientists  gives an interesting piece of information. The missiles displayed during the October 1 parade in Beijing were probably not DF-31A, but DF-31 missiles only. Have the Second Artillery Corps bluffed to impress the onlookers and miliatry experts?
Another interesting (or funny)  news is that the beautiful red girls who marched on Tienanmen Square were hired models.
Should the Indian MoD planned a similar display for the next Republic Day? Without miniskirts (with saris instead), of course! 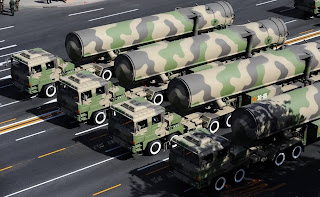 Missile Mystery in Beijing
By Hans M. Kristensen
The mysterious DF-41 missile did not appear at the Chinese National Day parade on October 1st, but the Chinese Ministry of National Defense says the DF-31A did. But did it, or was it in fact the DF-31?
The military parade at China’s 60th National Day celebration last week was widely rumored to be displaying a new long-range ballistic missile described in the news media as the DF-41. The rumors turned out to be, well, rumors.
Instead the Chinese Ministry of National Defense identified two other missiles: the nuclear DF-31A and the conventional DF-21C, to my knowledge a first.
But was it the DF-31A that rolled across the square or the shorter-range DF-31 already displayed ten years ago at the 1999 parade?
Read on...


Pretty Models On Parade in Beijing 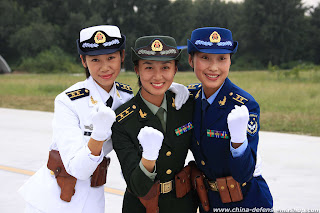 China has hired professional female models to march in a parade. This was seen as very important for the survival of the communist government. The October 2nd parade in China, to celebrate 60 years of communist rule, wants to make China, and its government, look good. To that end, the parade organizers are having contingents, from all the military organizations in China, march past the high def TV cameras. Being a communist police state, there are lots of uniformed groups. Many have female components. The parade organizers particularly wanted to insure that the women in uniform looked good. Not just military good, but good.
When they discovered that the female contingent from the People's Militia did not measure up, they proceeded to hire models, from as far away as Singapore, to pretty-up the women's contingent of the People's Militia.