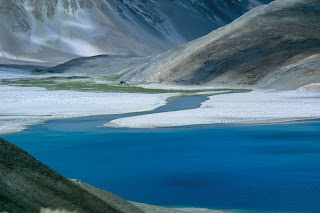 Five chief ministers to sign declaration on environment
(Source: IANS) 29 Oct 2009
Shimla: Concerned over the impact of global warming, chief ministers of five Himalayan states will sign the Shimla Declaration Friday, the concluding day of a two-day meet on environment that began here Thursday.
A spokesperson for the state government said: "Chief Ministers of Himachal Pradesh, Jammu and Kashmir, Uttarakhand, Arunachal Pradesh and Sikkim would Friday issue a detailed action plan to save environment. The action plan Shimla Declaration would take up environmental issues that are affecting the hill states."
Union Minister of State for Environment and Forest Jairam Ramesh would preside over the conclave, he said.
Experts from the five states discussed the impact of climatic changes on the flora and fauna of the states on the opening day of the conclave.
Posted by Claude Arpi at 6:49 AM