The Dalai Lama is now a burden on India! 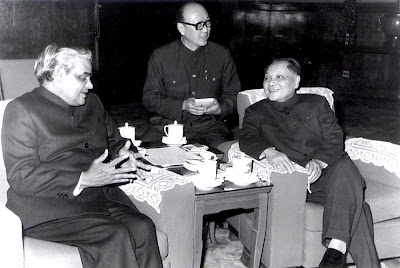 Deng Xiaoping, the architect of China’s economic liberalization is also the Chinese leader who initiated the dialogue with the Dalai Lama who had taken refuge in India in 1959.
A meeting between Deng and Gyalo Thondup, the Dalai Lama’s brother is often cited as the first step towards a rapprochement between Beijing and Dharamsala.
The encounter took place in Beijing on March 12, 1979. Deng immediately blamed the Gang of Four for the difficult situation in Tibet. It was then the standard excuse for all that had gone wrong in China (and in Tibet) since the mid-sixties. Deng said that he was however keen to improve the lot of the Tibetan population. He told Thondup that he would like to invite the refugees in India and abroad to return to Tibet, “It is better to see once than to hear a hundred times”.
It was during this meeting that Deng Xiaoping said: “The door is opened for negotiations as long as we don’t speak about independence. Everything else is negotiable”.
On his part, the Dalai Lama was keen to send fact-finding missions from Dharamsala to visit Tibet and get first-hand information on the situation on the Roof of the World. This was accepted by Deng.
It is in these circumstances that three delegations visited their native land in 1979/1980, after a gap of 20 years. These events marked the beginning of 30 years of contacts between Dharamsala and Beijing.
Deng’s meeting with Thondup brought a new hope for the Tibetan Diaspora. Was the end of the tunnel in view? Deng’s offer was certainly sincere, they thought.
Indian Foreign Minister A.B. Vajpayee’s visit to China in February 1979 (it occurred a few weeks before Gyalo Thondup’s meeting with Deng), showed another face of Deng. True, the paramount leader had introduced an ‘open-door economic policy’ and taken the initiative to invite the Indian Foreign Minister to China; he was keen to reestablish at the highest level the contacts between Delhi and Beijing (interrupted after the 1962 Sino-Indian war). But India discovered another facet of Deng when China suddenly attacked Vietnam, an ally of India in the midst of Vajpayee's visit. The Indian Foreign Minister had to be recalled. This incident already shows Deng’s double-dealing methods.
Some other hints tend to prove that Deng was not a great lover of Tibet. In December 1975, the US president Gerald Ford visited China and met Deng Xiaoping, then Vice-Premier of the State Council. Deng brought some ‘small issues’ to the attention of the US President. One was the fact that the Dalai Lama had opened ‘a small office in your country [in New York]’.
The US President told his interlocutor: “Let me assure you, Mr. Vice Premier that we oppose and do not support any governmental action as far as Tibet is concerned. “
Though Ford insisted that the opening of the Office in the US was a private initiative, and not a government decision, Deng insisted: “Things might be easier if you refused them visas.” Kissinger intervened and jokingly said: “When they become Communists, then we have a legal basis to refuse them visas.”
They all had a good laugh as the Communists were still being harried by the US Administration. Deng commented: “After [the Dalai Lama] went back to Tibet he staged a rebellion and left, fled the country [in March 1959]. At that time actually it was possible for us to have stopped his leaving the country. It was entirely within our capacity to stop him from leaving. But Chairman Mao said it is better to let him go. [The Chinese all laugh.]”
As the talk ended, Ford told Deng: “I may just add that we do not approve of the actions that the Indians are taking as far as Tibet is concerned”, the Chinese leader retorted: “We do not pay much attention to that because it is of no use. And to put it in more explicit terms, the Dalai Lama is now a burden on India”.
The Chinese burst out laughing. The Chinese Vice-Premier added that if the Dalai lama wanted to return to Tibet, Beijing “might even welcome him back for a short visit” to see the progress made. Deng spoke of the “progress wrought by the serfs that he [the Dalai Lama] had so cruelly ruled.”
Ford joked: “I do not think you want to relieve India of any extra burdens that it has.”
In the same mood, the Chinese replied: “We do not want to. Let them carry it for 100 years! We will think about it after that. The Dalai Lama must be in his 30’s, at the most 40. He was very young at that time. He might still live another 60 years, to 100. So let India carry that burden for another 60 years at least.”
At the end, Deng told the US President: “So, no matter what the Dalai Lama can boast about himself, he cannot affect the prospects of Tibet.”
President Ford retorted: “He should stay in India”.
Deng concluded showing once again his disregard for the Dalai Lama: “Yes, and we wish him a long life and a long stay there. [Laughter]”
This is one of the several such anecdotes retold by Claude Arpi, in his The Negotiations that never were, which tend to show that the Chinese leadership, whether in the 1970’s or today, has never been in a hurry to accommodate the more-than-reasonable demands of the Dalai Lama. 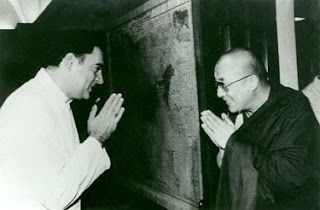 Another interesting document quoted by Arpi is a letter from the Dalai Lama to Rajiv Gandhi in September 1987. As the Tibetan leader was leaving for the United States to present his famous Five-Point Peace Plan, he decided to fully brief the Indian Prime Minister on his new proposals: “In the second week of September I am planning to visit the United States. I will be in Washington for about two days and will be having the opportunity of meeting with some of the U.S. Senators and Congressmen who have been very supportive of the Tibetan issue. I intend to use the occasion to make an announcement incorporating the following points:
(1) That the transfer of large numbers of Chinese into Tibet must stop.
(2) That discrimination and human rights abuses in Tibet must stop.
(3) That Tibet be declared a ZONE OF PEACE and that Chinese military forces be withdrawn for the sake of peace and stability, particularly in this part of the world. And,
(4) That the Chinese should stop destroying the Tibetan ecology, stop using Tibet as a nuclear base and stop dumping their nuclear wastes in Tibet.”
A fifth point was later added about the necessity to start negotiations at the earliest in order to find a reasonable settlement between Dharamsala and Beijing. The Dalai Lama explained to Rajiv Gandhi: “As an introduction to these points I will briefly explain the case of Tibet being historically an independent nation. An immediate solution to the Tibetan issue may not be possible, but I am sure Your Excellency will agree with me that at least the Chinese must heed to the above demands if the Tibetan people as a race and a cultural entity are to survive.”
It is not known if the Indian Prime Minister ever replied to the Dalai Lama, though The Negotiations that never repeatedly show that the Sino-Indian talks on the border dispute as well as the Indo-China relations at large are deeply linked to the Tibetan issue.
This book will help the student of foreign relations to understand the way the Chinese diplomacy functions and often (not to say always) gets the best of its opponent.
Posted by Claude Arpi at 5:57 AM

Email ThisBlogThis!Share to TwitterShare to FacebookShare to Pinterest
Labels: The Negotiations that never were

Do you provide the source document for the conversations between Ford and Deng about the Dalai Lama?

And I am looking for it desperately. Thanks if you can help.

Try http://history.state.gov/historicaldocuments/frus1969-76v18/d137
The Obama Administration has changed the Website and URL
Regards
Claude

Thanks Mr. Arpi for the link.

Regarding the Dalai Lama, I don't think the Chinese will let him return any time soon - no matter under whose leadership.

Dalai Lama has to stop dreaming about "One Tibet One People/Nation".

Tibetan culture is not at risk. It will accept influence from the Han culture, as well as globalisation and modernisation. The Dalai Lama should accept that, and embrace it wholeheartedly. Cultural influence flows both way. The Dalai Lama can also affect overall Chinese culture if he returns under present conditions.


Otherwise, the Indian-Tibetans and Chinese-Tibetans will become two completely "disharmonious" communities in another 50 years.
(Think about Taiwan and Hong Kong. After the long separation, many cannot adapt to mainland culture).