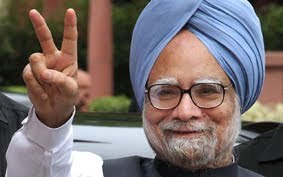 Obama can't, but India did it! She stood to China.
The United States' President does not even have the excuse to have 4000 km of border with China!
It is just a question of courage (and wisdom).
At the end of the day, India will earn more respect from Beijing than Obama's Administration. To stand to the bully is ultimately good for world peace.
Is it too late to withdraw the Nobel Peace Prize from Obama and give it to Manmohan?

THE WALL STREET JOURNAL
OCTOBER 28, 2009
Dalai Lama Lesson
India shows the world how to stand firm with China.
As Barack Obama prepares for his trip to Beijing next month, he’d be wise to cast an eye toward New Delhi, where Prime Minister Manmohan Singh is showing the rest of the world how to deal with Beijing when it gets into a bullying mood.
At issue is the Dalai Lama’s proposed trip next month to visit Tibetan Buddhist believers in Arunachal Pradesh, a province governed by India but claimed by China since the border war in 1962. Chinese spokesperson Ma Zhaoxu said last week the trip "further exposed the anti-China and separatist nature of the Dalai clique."
But India stood firm. During a regional summit over the weekend Prime Minister Manmohan Singh says he "explained to Premier Wen [Jiabao] that the Dalai Lama is our honored guest; he is a religious leader." The prime minister went on to imply that the Dalai Lama was free to travel where he pleased, so long as he did not engage in political activities.
Mr. Singh’s stance stands in sharp contrast to Mr. Obama’s decision not to meet with the Dalai Lama earlier this month. His cave-in broke Presidential precedent and emboldened Beijing to step up anti-Dalai Lama rhetoric, particularly in—guess where—India, which has hosted the Tibetan government-in-exile for more than 50 years.
Mr. Singh will face further China tests soon, given the other conflicts with his northern neighbor. China and India still dispute their 2,200-mile long border, and according to the Indian ministry of defense, Chinese incursions into Indian territory are on the rise. The countries are also butting heads in Kashmir, where China supports construction projects in territory claimed by India, and in Nepal, where Chinese influence has increased since the change of government there last year.
Those irritants are more reason for Mr. Singh to stand firm on the principles for which India stands—the very same principles of democracy and freedom that America holds. Therein lies a lesson for Mr. Obama, too.

Email ThisBlogThis!Share to TwitterShare to FacebookShare to Pinterest
Labels: Tawang