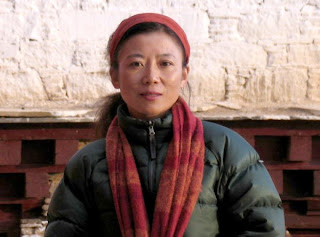 
She is the Voice of Tibet, the Voice of courage inside Tibet; she dares the mighty Chinese Empire with her blog.
Her writings as well as those of other writers and poets are now available in English on the site of International Campaign for Tibet.
Here is Woeser's voice:


Voice is an important word. And to issue a voice is a more important act. In Tibet’s monasteries, the sound of monks’ clapping hands can often be heard as they debate the scriptures. And the voices debating scriptures, among all the voices in Tibet, are but one kind of voice, a symbol of the Great Dharma which like pure gold fears no fire. And aside from this, what other voices are there in this land of Tibet?
One person, or one group of people, they have voices that comes from within, a voice that pours deep sentiments across this land; a voice that coalesces the people’s valuable spirit; and a voice that speaks to themselves living outside Tibet and that considers, reflects back upon and expresses historical memory – one that spreads far and wide as soon as it’s issued but that’s likely to be immediately subjected to various censures in today’s Tibet. And among these censures it seems the most righteous one heard is: “You eat what we give you, you use what we give you, and yet you attack us – you are devoid of gratitude.”
What does it tell us that Tibetans living in their own land suffer such censure? Why would an ancient people with a long history live debased lives to this day by always relying on the benevolence of others?

Email ThisBlogThis!Share to TwitterShare to FacebookShare to Pinterest
Labels: Woeser