A few weeks ago, I mentioned  the construction of dams by the Chinese authorities, north of the McMahon Line. The  work seems to progress very fast. The Spokesperson of the MEA objects to the construction of dams in POK, it is good, but he should also complain about these dams on the Brahmaputra which will directly affect the INDIAN State of Arunachal Pradesh.

Pranab Dhal Samanta
Oct 15, 2009
New Delhi : So far, Beijing has denied any plans to build a dam on its side of the Brahmaputra river. But strong evidence has now emerged to suggest that China has begun constructing a dam on the river which it calls the Yarlungzangbo (better known as Yarlong Tsangpo to the Tibetans).
It’s learnt that the Zangmu hydroelectrical project was inaugurated on March 16 this year and the first concrete was poured on April 2.
The 1.138-billion Yuan (1 Yuan = $0.15) project has been awarded to a five-company consortium with China Gezhouba Group along with NIDR (China Water Northeastern investigation, design and research) involved in its construction.
Involved in its financing is the Huaneng Corporation, one of China’s biggest power companies.
From preliminary information available with India, the Chinese plan to have a series of five medium-sized dams along the river in the Nanshan region of Tibet at Zangmu, Jiacha or Gyatsa, Zhongda, Jiexu and Langzhen. 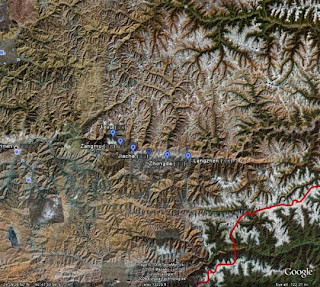 Of this, sources said, detailed information so far is available on the Zangmu dam.
This dam is expected to generate 540 MW; its height will be 116 m and length 389.5 m, it’s 19 m wide at the top and 76 m wide at the bottom.
According to information that is being circulated by companies involved in the project, the Zangmu dam is a gravity dam with water-blocking structures which could mean construction of a reservoir.
Some academic articles had set off fears of hydroelectric projects and water diversion plans on the Brahmaputra in Tibet about three years ago.
A worried India, as a lower riparian country, had taken up the matter with China. Beijing had then assured New Delhi that these were just articles in the press and “no concrete decision” had been taken.
The assumption here was that China was only looking at tributaries of the Brahmaputra but the Zangmu dam project is well after all tributaries have joined the river.
The two countries had then agreed to establish a joint mechanism for sharing technical data on rivers like the Brahmaputra and Sutlej.
This exchange, however, has been restricted to flood season data and Indian efforts to widen the scope of information-sharing have not moved forward.
China, sources said, never informed India about its plans or this specific project.
Significantly, according to information received here, the Nanshan Regional Administration issued orders as early as October 30, 2007 for evacuation of people from the area from November 1, 2007.
According to the order, the dam site will include all areas up to 3310 m above sea level and people inhabiting these heights were asked to vacate. 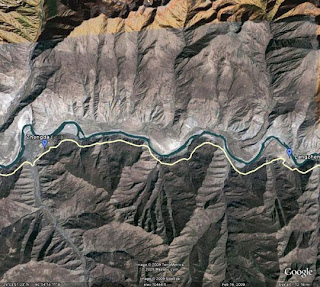 Earlier this month, the Gezhouba group is said to have gone public saying it had successfully completed setting up the concrete feed line.
Satellite images from February show construction activity in Zangmu and Jiacha with evidence of labour quarters.
The consequences to India from this project and the others about which little information is known — can only be ascertained if more information is shared and teams are allowed to access the site.
It’s learnt that the tendering process for this entire project is being overseen by the Three Gorges International Corporation.
Along with India, Bangladesh is another country that would be affected by dams and has often voiced concerns in this regard.

The news of construction of dam on brahmputra river is now out in open. Indian Satellites have captured crystal clear view of Dam construction. Chinese leadership is full of liars, it lied to its neighbors that it is not constructing the dam. This country will bring severe catastrophe to all the neighboring countries and is a big threat. It has a selfish motive, and its leaders are liars to their own people as well to the entire world.

A country which reaches to other parts of world with the hand of friendship (Pseudo), but does not have good relationships with its neighboring countries, cannot be trusted.

They have killed unknown number of Tibetans and few of ethnics belonging to certain ethnic provinces, which are in minority, has an aggressive bent of mind to capture territories of other countries by any means. China is by no means a peaceful country, it will always finger around everywhere.

It is exploiting Africans for their resources and in return providing money & weapons to the separatists and terrorists, which in turn protect the interests of chinese in africa.

The infrastructure projects in Africa is a coverup, the real motive is something else.

I have never heard china being constructive, its roles are dubious in nature. From North Korea to Pakistan, Iran to Myanmar, China is involved in clandestine nuclear and missile proliferations.

Some day it will put all the dangerous countries which don't want to gel with the remaining peaceloving countries of the world,sitting on time bomb waiting to explode and create an enormous destruction.