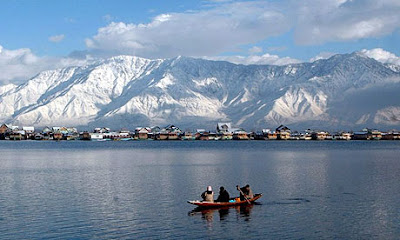 The PRC authorities have introduced a new Kashmir visa policy!
This will not help creating an atmosphere of friendship and brotherhood between Delhi and Beijing.


THE HINDU, OCTOBER 1, 2009
Delhi upset over separate Chinese visas for Kashmiris
Siddharth Varadarajan
In a move that has puzzled and annoyed South Block, the Chinese embassy in New Delhi has begun issuing visas to Indian passport holders from Jammu and Kashmir on a separate sheet of paper rather than stamping them in their passports as is the norm with other Indian citizens. Though it is not clear when the new Chinese policy started or what prompted Beijing to adopt it, immigration authorities at Delhi airport first started noticing the standalone visas a few weeks ago. The Bureau of Immigration, which is run by the Ministry of Home Affairs, initially assumed these visas to be fake and turned the unfortunate travellers – all of them Kashmiri students or businessmen – away. But when some of them returned with letters from the Chinese embassy declaring the visas to be genuine, the matter was referred to the Ministry of External Affairs.
With the Chinese issuing “stapled visas” to the handful of Indian passport holders from Arunachal Pradesh who have travelled to China since 2007, the MEA saw in Beijing’s latest move an attempt to question the status of Jammu and Kashmir. The immigration authorities were told to treat any visa that is not stamped on a passport as invalid for the purposes of travel. Simultaneously, the issue was taken up with the Chinese authorities, MEA officials told The Hindu.
Although the People’s Republic of China embassy in Delhi said it would not officially comment on the matter, Chinese diplomats told The Hindu that the practice of issuing visas on a separate piece of paper is not new. “This kind of visa is one category of Chinese visa. It is valid. This has been practised for many years. Upon the implementation of this, a note was sent to your immigration authorities. All the visa holders of this kind have not met any problem in the past in your custom/border control,” an embassy official said on condition of anonymity.
The MEA denies the contention that India has only now started objecting to some pre-existing Chinese practice of issuing Kashmiri domicile passport holders visas on a separate sheet of paper. “What the Chinese are doing is definitely new and we have taken a serious view of it,” an MEA official said.
Posted by Claude Arpi at 11:51 AM