The same old thing in Tibet?

A relatively large contingent of Communist leaders posted in Tibet have made it to CCP's Central Committee (CC) (full-fledged or alternate).
Nobody, of course, was promoted in the Politburo, though eight leaders posted in Tibet are now members of the Central Committee.
More interesting Lt. General Yang Jinshan, the PLA Commander of the Tibet Military District has been promoted to Full CC membership, while Gongbo Tashi, the head of the TAR United Front Department was promoted Alternate CC member.
However, Jampa Phuntsok (Qiangba Puncog), former Chairman of the government of Tibet Autonomous Region from 2003 until January 2010 and later Chairman of the Standing Committee of the People's Congress of the Tibet Autonomous Region is out (retired).
It has also to be noted that Zhu Weiqun, the Executive Deputy Minister of the United Front, who in the past handled day to day Tibetan affairs is not a member of the CC anymore.

Tibetan hardliner Ragdi, who has no official position any longer escorted Hu Jintao into the Great Hall of the People to meet and spend an hour with the TAR delegation after the opening of the 18th Congress.
Hu Jintao will probably keep a finger in the Tibetan pie through his protege Ling Jihua, the new boss of the United Front Work Department. Though Ling did not make it to the Standing Committee of the Politburo (due to his son's Ferrari accident, he was found found naked and probably dead with 2 'ethnic' girls), Ling remains a powerful force.
Du Qinglin, the former Director of the United Front has switched place with Ling in the Secretariat of Central Committee.
Tibet policy is not going to change soon. 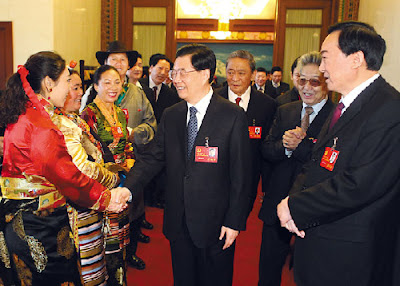 Regarding the Central Military Commission (CMC), the passing of power was apparently smooth, but no 'Tibet' experts seem to be amongst the 10 uniformed members.
However, the strengethning of the Air Force with the appointment of  General Xu Qiliang, the former PLA Air Force Chief as Vice-Chairman of the CMC may provide new 'air' opportunities for the Chinese defense forces in case of a conflict with India.

Xi Jinping commands special military commission meeting
South China Morning Post
Minnie Chan
At a special meeting of the Central Military Commission, Hu Jintao gives ringing endorsement of his successor's ability to unite comrades
Xi Jinping has shown the world that he is now in charge of the People's Liberation Army - chairing a special meeting of the Communist Party's Central Military Commission (CMC) a day after being put in charge.
And President Hu Jintao, who on Thursday passed the chairmanship of the body that controls the PLA, along with the leadership of the Communist Party, gave his ringing endorsement to his successor at Friday's meeting.

The incoming and outgoing top brass were all present.
Hu told the special meeting that Xi was "a competent party general secretary and CMC chairman", and highlighted his successor's experience.
"Comrade Xi Jinping can, for sure, shoulder the great responsibility of being chairman of the Central Military Commission, and uniting and leading the commission to fulfil great and historic missions," state media quoted Hu as saying yesterday.
Xi told his audience that Hu's own decision to step down as CMC chairman with immediate effect had "shown his foresight as a Marxist statesman and strategist, and his broad mind and noble character".
Hu's predecessor Jiang Zemin remained chairman of the military commission for two more years after handing over the post of party chief in 2002.
Xu Guangyu, a senior researcher at the China Arms Control and Disarmament Association in Beijing, said: "[Hu and Xi] were telling all retired leaders not to cling to power any more and to trust the next generation of leaders."
The speech also marked another major departure from the past. When Hu inherited the top military post from Jiang in 2004, he stressed in his inaugural speech that under the PLA's "political principle" it "would make no promise to give up the use of force" to secure reunification with Taiwan.
Eight years later, Xi's inaugural address sidestepped the Taiwan issue completely.
"Cross-strait relations have improved since Ma Ying-jeou came to power in 2008 - it's unnecessary to mention such a sensitive issue to provoke Taiwanese compatriots," Xu said, adding that Xi had spent 17 years in Fujian , just across the strait from Taiwan, and was clearly confident on the subject.
"Xi also realised that the real knotty problem now is in the East and South China seas, which need both Beijing and Taipei to work together to defend our national sovereignty," Xu said, referring to territorial disputes over various islands.
Taipei-based political commentator Lin Baohua, also known as Ling Feng, said Xi also wanted to show Japan and the US that he would continue to use economic means to solve the Taiwan problem. "Xi realises that if he uses military force to liberate Taiwan, the cost would be much higher than the use of economic forces," he said.
Hu and Xi also reiterated the army's absolute loyalty to the party. Xi made it clear senior officers should set examples for troops in anti-corruption campaigns.
Posted by Claude Arpi at 7:55 AM