The only solution for Tibet issue 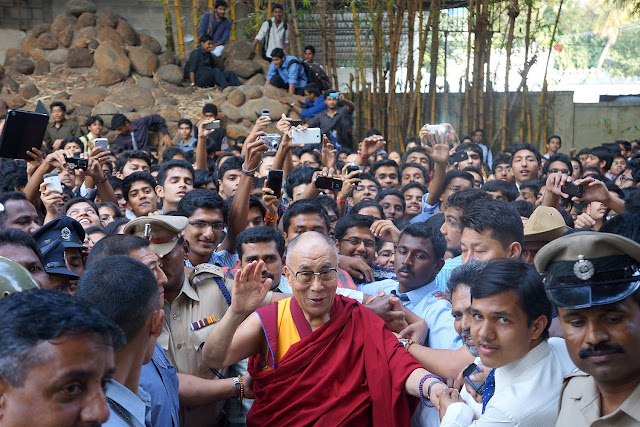 My article The only solution for Tibet issue appeared in the DNA today.

The Dalai Lama is in town. I was to travel to Bangalore when I heard that the Dalai Lama would be in the city for 2 days. Immediately, I thought I should try to have his Darshan; the easiest way was to attend his lecture on ‘science and religion’ held at the Christ University.
In recent years, each time I have attended a public discourse by the Tibetan leader, I have been astounded by his immense popularity; some observers have spoken of a ‘pop star’ phenomenon. It is not the correct definition, as he lacks the ‘ego cult’ of the pop stars; on the contrary, he has remained a ‘simple monk’.
When he arrived at the venue, despite the security measures taken by the University staff and the police, the crowds went crazy. The photographers were the worst; I always marvel at his security personnel managing to keep their cool in the melee.
The 2000-seat Auditorium which was packed to the brim suddenly went silent as he began talking. The Tibetan leader started with a small survey. He asked how many in the auditorium were less than 20-years old; very few arms went up. Then, between 20 and 25, most of the hands were up. He continued, above 60? A few honorable professors, acknowledged their seniority. Then, he lifted his arm to indicate that he was more than 70. A couple of ‘senior’ members of the faculty and the Vice-Chancellor admitted being in the last category. He started laughing and said: “the world does not belong to us, because we belong to the past century; most of the present problems (he particularly cited environmental issues) have been created during the past century by us, ‘old people’; it is up to you to now rectify these predicaments. He continued: “The 21st century belongs to you, it is your duty to change the world; do not think that your lonely voice can’t do anything; you should and can do it”.
Once again, he cited environment pollution, corruption, violence, hatred or social inequality as the main issues to ‘change’.
He insisted that change it can only happen through love, compassion and understanding of the ‘others’. He told the audience an anecdote: one day, a Cuban refugee came to see him and told him that she was a Christian and everyday she was praying that Fidel Castro should depart from this world; but in her prayer, she requested the Lord to find a place for the Leader Maximo in Paradise. It was the correct way, explained the Dalai Lama; “you should pray that even your enemy’s life ends peacefully”.
I thought to myself that it would be a good way to sort out the Tibetan issue, if all the leaders of the Communist Party of China were sent to Heaven. But with my less-compassionate mind, I immediately thought that leaders like Jiang Zemin or Li Peng would certainly continue to pull some strings from their (Marxist) Paradise.
The students were spell-bound. At last here was someone who spoke to their latent idealism and higher aspirations for a better world; and this, in simple words.
The ever-increasing popularity of the Tibetan leader in India and abroad raises the issue of the situation in his homeland. One can’t stop thinking: what would happen if the Dalai Lama was allowed to return to Tibet (even for a brief visit)? One still has in mind the riotous scenes when 3 fact-finding delegations from Dharamsala visited Tibet in 1979-1980.
Huge crowds assembled wherever they went, even in the most remote nomadic areas; they surrounded the delegates to get a close darshan of the envoys of the ‘living god’ (or more rightly, the incarnation of Avalokiteshvara, the Bodhisattva of Compassion); the hair of the poor delegates were pulled to be kept as relics, their chubas (Tibetan traditional dress) were torn; local nomads ate the dust of the tyres of the envoys’ vehicles as prasad. Considering that most of the 85 Tibetans who have immolated themselves, left notes before their fatal gesture asking for their leader’s return, one can imagine what would happen in Tibet.
At the same time, the Dalai Lama is the only leader which can stop Tibet burning and China disintegrating. How many in the Politburo realize this? Perhaps, the soon-to-be President Xi Jinping does; but will he be able to take along his colleagues on the reconciliation ‘middle path’? Some probably still think in terms of using yet more force to repress the ‘restive minorities’? But has force worked since 1959? Is there then a realistic solution?
Yes, Xi Jinping, whose father Xi Zhongxun knew the Dalai Lama well in the 1950’s and early 1960’s, should personally meet the Tibetan leader in a Chinese (or Indian) embassy abroad and have a preliminary discussion with the Dalai Lama to prepare a road map to stop the immolations and bring about a genuine reconciliation between Tibet and China.
Will Xi Junior have the courage to take this step? Will he be allowed by his new Politburo? What other choice does China have?
Like the Cuban refugee, let us pray to God (or Buddha) that He supports a win-win solution for all the parties concerned. It is not an easy task, even for God.
Posted by Claude Arpi at 4:25 AM