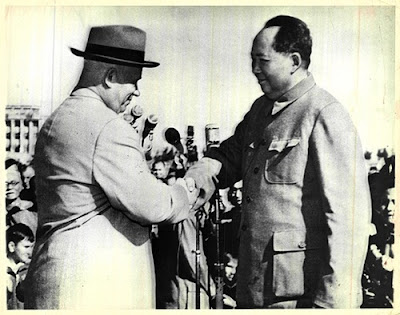 Despite the comprehensive coverage of the 1962 conflict in the India press/media, one angle has not been studied and analyzed: it is the views from Moscow.
I am posting two documents (published by  the Cold War International History Project of the Woodrow Wilson International Center for Scholars in Washington, D.C.) which bring some light on the Soviet's position.
First a report from a Romanian delegation led by Foreign Minister Corneliu Manescu; after visiting Indonesia, India and Burma, and before returning to Bucharest, they had a stop-over in Moscow; they were invited for dinner by N. S. Khrushchev, the First Secretary of the Communist Party of the Soviet Union and as Chairman of the Council of Ministers with whom they shared their impressions of their trip.
Moscow has just decided to take Beijing's side in the border conflict.
India had no friends left.
The second document is a Journal entry by Benediktov, Soviet Ambassador to India, describing a conversation with the General Secretary of the Communist Party of India, E.M. Nambudiripad.
The encounter took place a day after the Soviet leadership had dramatically announced its new policy on the Sino-Indian conflict (in an article in Pravda on October 25).
This document shows the servile attitude of the Indian comrades.

Report of the discussions of the government delegation of PRR [Romania] with the CPSU [Soviet Communist Party] and the Soviet leaders including N. S. Khrushchev on October 23, 1962.

After mentioning their visit in Indonesia and Burma, the Romanian Foreign Minister Corneliu Manescu reports:

Comrade N. S. Khrushchev insisted more on the attitude of [Indian Prime Minister] Nehru and the Sino-India problem. In this context, comrade Khrushchev generally mentioned that Nehru had oscillated between the line of imperialist countries, neutrality and the socialist countries. Lately, [being] under the influence of the ruling party, of the reactionary forces, Nehru seems to be closer to the line of imperialist countries.
The position he occupies in the last time, toward the issue of border conflict with China, is downright reactionary. The Chinese side (the Soviet ambassador in China was informed directly by Zhou En-Lai about this) recently proposed the withdrawal of Chinese and Indian troops at 20 km on each side of the border. Also under the pressure of the reactionary forces, the Indian side rejected this proposal on the grounds that the border should remain the McMahon line. [Manuscript comment: at[tention!]
Comrade N. S. Khrushchev said that this is not fair because the McMahon line was established by the British in 1912, when India was a British colony and, of course, the British had every incentive to take as much Chinese territory as possible.
Therefore, based on proposals of the Chinese side, now would be normal to start bilateral negotiations. [Manuscript comment: v[ery] i[mportant].
The point of view of the Soviet side was communicated to the P.R. [People's Republic] of China on 8 October and India on 20 October, through a confidential discussion of the Soviet Ambassador in India with J. Nehru.
Basically, Nehru considered that the USSR’s opinion is good, but in fact he didn’t give any practical response that could show the decision that will be taken by him. Manuscript comment: at[tention!]
But most troubling is the fact that the General Secretary of the C[ommunist] P[arty] of India [E.M.S. Namboodiripad] was in a wrong position this time, supported the view of J. Nehru. This is dangerous because it can lead to divisions among the Party.
He has taken measures in order to know the opinion of CPSU, including the opinion of General Secretary of the C[ommunist] P[arty] of India.
After the brief presentation Comrade N. S. Khrushchev toasted to the Romanian-Soviet friendship.

Description: Journal entry by Benediktov describing a conversation with General Secretary of the Communist Party of India, E.M. Nambudiripad. The encounter took place a day after the Soviet leadership had dramatically modified its policy on the Sino-Indian dispute (in an October 25 article in Pravda), suddenly taking a pro-China position, evidently due to the danger of global war breaking out as a result of the Cuban Missile Crisis, then peaking. While taking pains to welcome the Pravda article as helpful in correcting misunderstandings among Indian Communists, the CPI leader acknowledged that the party secretariat had concluded that “this publication in all probability will inaugurate a new period of anti-Soviet hysteria in India”, pushing the Indian Government toward the West, and he pleaded with the Soviets to influence China to resolve the border dispute "without damage to the prestige of India and of Nehru himself."

Today at my own initiative, fulfilling the commission of the CC CPSU, I met with E.M. Nambudiripad and informed him of the statement of the CC CPSU on the Indian-Chinese border conflict. He listened most attentively to the statement of the CC and promised immediately to convey its contents to the members of the secretariat of the National Council of the CPI.
Nambudiripad said that four members of the secretariat, who were in Delhi, today carefully studied and discussed at length the Pravda article of October 25 on the border question. "We ask that you transmit this to the CC CPSU, - he continued, - that the publication of this article and the advice of the CPSU contained in this letter of the CC CPSU, truly will help our party get out of the extremely difficult position it is now in. Before this [help] there were moments when we felt ourselves to be simply helpless, but now the party will be able to remedy this situation. We are grateful to the CC CPSU for this help; you can transmit this personally from me and from Comrade B. Gupta."
He pointed out the whole array of difficulties the CPI faces in correcting its earlier positions and statements on the border question. The most typical mistake of many communists, in his words, is that they cannot clearly distinguish [between] patriotism and bourgeois nationalism. Some of the members of the party considered it possible [that there would be] support for the Indian position in this dispute from a number of communist parties of the socialist countries in light of the ideological differences between the CCP PRC and other fraternal parties, although - he continued, - I knew that this was impossible and incorrect. Moreover, it is very difficult in general to sharply reformulate the whole system of views on the border conflict held by members of the party, since these views in many cases were contradictory to those expressed in Pravda and in this letter of the CC CPSU. In particular, the CPI for three years considered the McMahon line the real border between the two states. Many rank and file members of the party and some members of the leading organs, in solidarity with the widespread opinion among the population, hold to the view that the PRC is [the] guilty [party] in the origin and exacerbation of the border conflict." "Undoubtedly the article in Pravda will have an influence on these comrades, he said, it will force them to think through the whole question again." Members of the secretariat Nair and Sharma at today's meeting pointed out that the Pravda article, while in fact criticizing the position of the Indian communists and India's relation to this question as a whole, did not express any critical comments with regard to the PRC and the Chinese comrades.
Nambudiripad reported that the secretariat of the CPI after the discussion of the Pravda article today reached the conclusion that "this publication in all probability will inaugurate a new period of anti-Soviet hysteria in India." The campaign that is going on everywhere against the PRC will, obviously, be extended to the Soviet Union, and then to all countries of the socialist system....He expressed the opinion of the secretariat that in connection with this statement of the Soviet press and in connection with the pressure on India from many neutral countries regarding a more rapid peaceful settlement of this conflict, the Indian government... can reach the conclusion that only western countries are our true friends...
"In this connection we very much would like to find out if Soviet leaders could help the CPI give an understanding to the Chinese comrades that it is extremely desirable to give the possibility to Nehru to move toward peace negotiations and cease military actions without damage to the prestige of India and of Nehru himself, - Nambudiripad stated. The Secretariat has unanimously reached the conclusion that such a step by the PRC would have a huge significance for the cause of world peace, for all progressive forces, for the anti-imperialist struggle..."
Posted by Claude Arpi at 6:48 AM