Time for India to wake up 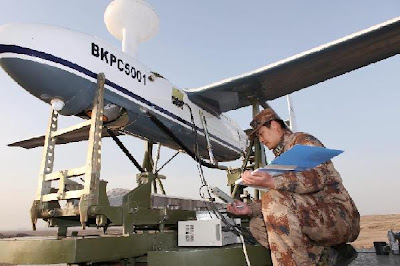 The Times of India reported  that A.K. Antony, the Indian Defense minister had urged the Army to go on  a 'fast-track' for the "China border projects".
The daily stated that 'in view of the current security scenario', the minister reviewed the development of new infrastructure including airfields along the China border in the northeast.
A K Antony asked the military top brass to go beyond the expected schedules for completion of the projects.
The meeting to review infrastructure development on the northeast border was attended by the Chiefs of the Army and IAF, the Defence Secretary, the chief of BRO (Border Roads Organisation) and other senior officials, .

In the meantime China is furthering its advance in other domains.
On November 23, 2012, China Military Online reported the launch of high-altitude drones and the undertaking of patrolling-and-inspection tests
The Chinese site says:


China Aerospace Science & Industry Corp., the nation’s biggest maker of non-military drones, expects to double unmanned aerial vehicles sales next year as sovereignty disputes spur government orders.
The country intends to increase monitoring at sea amid a row with Japan about the ownership of islands in the East China Sea, Huang Xingdong, deputy head of CASIC’s drone-making arm, said in a Nov. 13 interview at the Zhuhai airshow. The state- owned company signed an agreement to supply an undisclosed number of drones to an oceanic agency at the expo.
“The government is attaching greater importance to ocean intelligence gathering as the islands disputes heat up,” Huang said. He declined to give an exact sales forecast. The company also makes missiles and parts for China’s space program.
Aviation Industry Corp. of China, the nation’s largest aerospace company, separately debuted the armed Wing Loong UAV at the show, as China translates economic growth into increasing military might. The country, the biggest spender on defense after the U.S., began sailing its first aircraft carrier this year and it’s working on more sophisticated fighter jets, naval vessels and cyberwarfare technology
CASIC showcased six civilian and military drones at the Zhuhai show, and unveiled a new brand name, Hiwing, which means Sea Hawker in Chinese. Its UAVs can fly as fast as 700 kilometers per hour (435 miles per hour) and carry as much as 130 kilograms (287 pounds).
The company sold several dozen UAVs in the past few years, with prices ranging from less than 1 million yuan ($160,000) to about 10 million yuan, Huang said. The local non-military UAV market may eventually grow to as big as several billion yuan a year, he said. He didn’t give an estimate for defense sales.
‘Upward Cycle’
The China drone market is not big, but it’s starting an upward cycle,” Huang said. The company also announced an order from a government surveying agency at the show.
The dispute over East China Sea islands caused China’s relations with Japan to reach their lowest since at least 2005 in September. Demonstrators marched in cities across China and attacked Japanese businesses after Japan’s government bought the islands from a private owner. 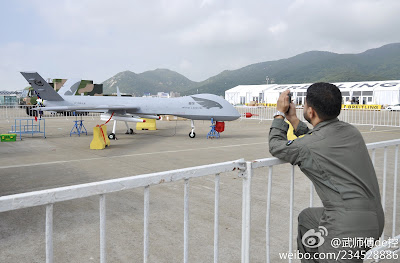 Western Tibet (Ngari Prefecture), on the Himachal/Ladakh border also comes under the Lanzhou Military Region.
And I do not mention that China has successfully conducted flight landing on its first aircraft carrier, the Liaoning. A new J-15 fighter jet was used as part of the landing exercise.
In the meantime, DRDO is building revolutionary eco-friendly toilets.
It is time for India to wake up.