Is China a fascist State? 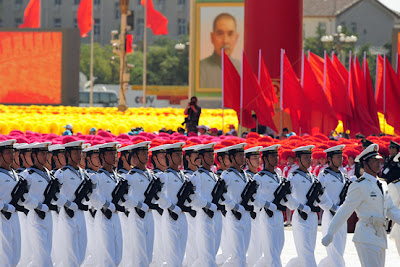 Is China a fascist State?
This is the question asked by The New York Times' columnist.
Ironically, in the Middle Kingdom everything is 'for the People' : the People's Republic of China, the People's National Congress, the People's Liberation Army, the People's Daily, etc..
Unfortunately, like in all fascist States, 'People' do not participate to the governance.
According to a Chinese publication, China Gate, Xi Jinping recently admitted that the 'Party's legitimacy is in danger', probably because the Party has forgotten The People of China, in an other word, the masses.
On October 28, 2012, China Gate reprinted an article from Hong Kong’s Trends Magazine titled “Xi Jinping Admits, in a Secret Meeting, that the Crumbling Legitimacy of the CCP’s Governance Has Set off Alarm Bells.”
The Hong Kong Magazine affirmed that during a secret meeting, Xi Jinping admitted that the CCP faces a fatal crisis.
According to the same paper, on September 26, at the 41st enlarged meeting of the Politiburo Standing Committee, Xi Jinping gave some preparatory comments in view of the preparation of the agenda for the forthcoming 18th People's National Congress.
He is supposed to have put forward 5 key issues.
The future President questioned: "Why is there so much tension between the people and the CCP?" "Why is the people’s distrust of the Party growing?”
Setting off alarm bells, he is said to have stated that the Party’s legitimacy was crumbling,
Fascist or not, the Chinese Communist Party has a problem. A big problem.

Can China Be Described as 'Fascist'?
The New York Times
October 31, 2012
DIDI KIRSTEN TATLOW
BEIJING — Chinese politics is controlled by the Communist Party and its powerful families and factions, so when the son of a former party chief says the state is virtually “fascist,” it’s worth listening.
That’s what Hu Deping, son of the late Hu Yaobang, the party general secretary forced to resign in 1987 for being too reform-minded, said to a group of mostly Chinese businesspeople and environmentalists in late 2005, in the Great Hall of the People on Tiananmen Square. (Because of his father’s fall, Mr. Hu is outside the mainstream of power, dubbed a “nonprinceling,” but his pedigree still makes him a party aristocrat.)
Seven years later, with pressure for political reform mounting and a new generation of leaders to be announced in that same Great Hall of the People at the 18th Party Congress, which starts next Thursday, Mr. Hu’s words continue to reverberate. What is China today, and where is it headed?
Here’s what Mr. Hu said, according to my notes: “No matter how authoritarian this society is, even fascist, the people of this country still want justice. One thing they seek is profit, and the other is justice.”
Is today’s China fascist?
To cite a few characteristics, starting with the one-party state: Since the economic reforms that followed the death of Mao Zedong, it has grown immensely wealthy through its state-owned companies, some of which rank among the world’s richest. What was once a poor, authoritarian state has become a rich, authoritarian state.
The rights to speak and associate freely remain tightly hobbled despite some relaxation, and some top officials openly scorn democracy. The courts obey the party’s directives.
Official slogans increasingly exhort nationalism and “national rejuvenation,” a concept rooted in a mystical sense of nationhood popular with fascist thinkers in the last century.
“The signs have long been there,” said Wang Lixiong, a prominent writer and scholar. “I feel there is a very clear trend toward fascism, and the source of fascism comes from the ever-growing power of the power holders.” China is “a police state,” he said, where power rules for power’s sake.
The passing of Mao did not lead to power-sharing, it just stripped China of its Communist ideology, and no convincing value system has filled the gap, he said.
“Power has become an interest group,” Mr. Wang said.
“Today the interest groups have no ideology,” he said. “Their goal is to protect their own profit and power. They can only rely on power to rule, because they have no goal that convinces the people. So the state relies on power to suppress society and attain its objectives. I think there’s no other route the power holders can go.”
These are large issues. On a more human scale, I was reminded of Mr. Hu’s words on Monday when five men, several of whom said they were police officers, came to our Beijing apartment to check our passports, visas and residence permits, almost certainly part of the stepped-up security before the Party Congress.
Seconds after they left, a loud argument erupted in the corridor outside. Through the spy hole I watched a Chinese neighbor loudly berate the police for meddling. The checks are intimidating and resented — and people increasingly are not afraid to say so.
For sure, terms other than “fascism” are also used to describe what’s going on. Xu Jilin, a leading intellectual and history professor at East China Normal University, in Shanghai, for example, writes that “statism” has grown dominant in the past decade.
In an essay last year, Mr. Xu warned that in an atmosphere where the Communist Party and the state claim the sole right to represent the “universal interest,” China may “re-tread the broken road of 20th-century Germany and Japan.”
For John Delury, a professor at Yonsei University, in South Korea, there are important differences between classic fascism, such as Nazi Germany’s, and what is happening in China today.
“Absolutely the critical thing is how to define fascism,” he said by telephone from Seoul.
“One of the strongest objections to using the word fascism is that a central element of fascism was mass mobilization,” which included the symbolism and choreography associated with, for example, Hitler’s rallies at Nuremberg, Mr. Delury said. While Mao did that, the current leadership does not, he said, a sign that the term does not exactly fit.
“I think still this leadership is very post-Mao, if not anti-Mao,” said Mr. Delury.
Yet for Mr. Wang, fascism is a threat, even without Mao’s charismatic leadership. He points to rising nationalism at home, increasingly directed overseas.
Does it surprise him to hear what was once a taboo word, an epithet to be hurled at the enemies of Communism, used by a member of China’s elite — even if a critical member — to describe China’s political direction?
“I’m not surprised to hear it, because they know, the people in these ruling circles, they don’t think it’s strange, they know what’s happening,” he said.