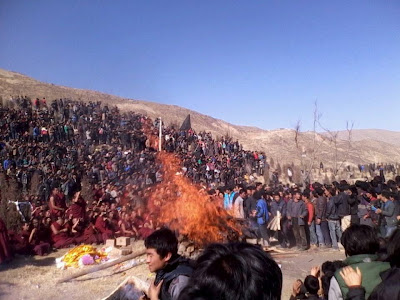 Good news have finally been received from Tibet: "the People’s income is increasing, Life is better and better, Security is becoming more and more powerful".
It is what this article posted on China Tibet Online says.
But if it so, why the hell are people burning themselves all over the plateau?
Will this dichotomy be discussed during the 18th Congress in Beijing?
There is a mystery there, don't you think?

“The key issue in strengthening social construction lies in the insurance and improvement of people’s livelihood. We should bring as much benefit as possible to the people, resolve as many difficulties as possible for them, and solve the most pressing and practical problems of the greatest concern to them. We will intensify efforts to improve the basic public service system and ensure that all the people enjoy their rights to education, employment, medical and old-age care, and housing, so that they will lead a better life.” President Hu Jintao said in a keynote speech at the opening of the CPC's 18th National Congress.
Over the past 10 years, along with the rapid economic and social development of Tibet, the regional Party committee and government have given a priority and great attention to people's livelihood. The life of urban and rural residents has undergone earth-shaking changes, including the significantly increased residential income and the fully covered social security system in all Tibetan areas. A beautiful picture has been showed where people are living a happy and peaceful life.

People’s income is increasing.
On Oct.1, Dawa Tsering opened his new vermicelli fabrication plant in Khesum Village, in Tibet’s Nedong County. In recent years, Dawa Tsering’s life has become better and better. Dawa Tsering began to fabricate the pea meals in 2000, later he and the villagers together raised pigs and grew vegetables. Now, his son buys a car for renting. The total income of his family is nearly 500,000 yuan.
“Our life is as good as that of the urban residents.” Dawa Tsering said with a smile.
Over the past ten years, the income of Tibetan people like Dawa Tsering is increasing gradually. Statistics show that in 2011, the urban per capita disposable income came to 16,196 yuan and the rural per capita net income reached 4,904 yuan, rising by 8.1% and 18.5% in real terms respectively. 42,881 urban residents received the government minimum living allowance with the relief fund of 112.225mln yuan, while the number of which were 230,000 and 180.6766mln respectively in rural areas.
An old Tibetan woman smiles happily. 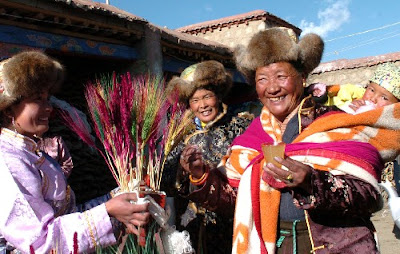 Life is better and better
Walking around in Tibetan rural areas, you can feel the modern atmosphere everywhere in spacious and clean streets, fragrant flowers, green and luxuriant trees and the elegant buildings.
Now, most of the Tibetan farmers and herdsmen are living in the Affordable Houses with the support of the Party’s preferential policies. Many families have installed telephones. Mobile phones are not fresh news, and even freely galloping cars can be seen in the countryside.
Besides the Affordable Houses Project, 320,000 more people could drink safe water, and 210,000 more people have access to electricity. More than 1,900 kilometers rural highways covering 700 villages have been built. The newly built spacious Affordable Houses are filled with the aromas of barley wine and yak butter tea as well as the happy laughter.
Over the past ten years, the living conditions of the urban and rural residents in Tibet have improved greatly. So far, the Tibetan Affordable Houses Project for farmers and herdsmen has completed investment of 21,927 million yuan, covering 350,500 households. Another 69,500 farmers and herdsmen will live in the affordable houses by the end of this year. By 2013, all the Tibetan farmers and herdsmen will live in safe and affordable houses.

Security is becoming more and more powerful
Tsajo, a 49-year-old farmer from Sumpang Township, in Lhundrup County of Lhasa, the capital city of Tibet Autonomous Region is a chronic gastritis sufferer. She jointed in the local medical insurance program in which she only needs to pay 10 yuan per year as medical fund, while 20,000 yuan of hospitalization expense is provided by the government for her every year. All the medical expense provided by the government comes from the special medical fund by the Department of Health. “I needn’t worry about the medical expenses so much as before.” Tsajo said.
In 2003, Tibet took lead in establishing the medical system based on free medical treatment in agricultural and pastoral areas, and clearly defined the regulations of the system in terms of the organization and management, fund raising, reimbursement and compensation. By 2009, the medical system had covered all the agricultural and pastoral areas. By the end of 2010, the new rural pension insurance system realized full coverage in rural areas, involving 2.21 million agricultural people.
Since last year, Tibet had encircled the senior high school education and medium vocational education to the “Three Guarantee” Policy, concerning food, dormitory and tuition. The benefited students have expanded to more than 500,000 from 27,000 since the new “Three Guarantee” Policy was implemented. The standard of the policy has been raised several times to 2400 ~ 2600 yuan per capita every year. “Three Guarantee” Policy in compulsory education stage has covered all the students from farmers and herdsmen’ families.
Over the past ten years, the Tibet local government has launched several policies to help and improve the employment of the graduates, such as increasing public officer positions, buying public welfare posts, and enhancing enterprises’ employment absorption capacities.
The opening of the 18th National Congress of the Communist Party once again sends a strong signal to improve people’s livelihood. With the support of central government, the Tibet Party committee and government will implement the policies that have a close relationship with people’s livelihood by all means, so as to improve and guarantee the living standards and conditions of the Tibetan people from all ethnic groups.
Posted by Claude Arpi at 7:12 AM